Today, the Congress Commemorative Gold Five-Dollar Coin remembers August 2, 1876, when the bill to appropriate funds to help finish the Washington Monument was approved.

Chap. 250. — An act providing for the completion of the Washington Monument.

Be it enacted by the Senate and House of Representatives of the United States of America in Congress assembled, That there be, and is hereby appropriated, out of any money in the Treasury not otherwise appropriated, the sum of two hundred thousand dollars payable in four equal annual installments to continue the construction of the Washington Monument  in the city of Washington…

The New Orleans Republican newspaper of the following day included this description of the monument situation:

There is a prospect at last of this generation seeing the completion of the much derided incomplete pile of masonry which was designed to commemorate the fame of Washington and the patriotism of his fellow citizens.

The bill appropriating $200, 000, less than one-half the amount required to finish the structure, passed the House of Representatives last Thursday.

All funds received have been devoted to the monument, now 174 feet high, and not a dollar has been paid to any officer or member of the society, nor will there be in the future.

The history of the monument, taken from the speech of Mr. Foster, who introduced the bill, and from the report of Mr. Chipman, Delegate from the District of Columbia to the Forty third Congress, is interesting.

The Continental Congress, August 7,1783, resolved to place at the capital an equestrian statue of Washington, when its site should be determined. His civil services adding to his military fame, at his death Congress resolved, December 24, 1799, that a marble monument be erected, and that his family be requested to allow his remains to be deposited under it.

In her reply the widow of the first President said:

“Taught by the great example which I have so long had before me never to oppose my private wishes to the public will, I need not, I cannot say what a sacrifice of individual feeling I make to a sense of public duty.”

In 1833 the association was formed. Its first president was Chief Justice Marshall who died in 1835. Ex-President Madison succeeded him at the age of eighty-five years.

The corner stone was laid July 4,1848, Robert C. Winthrop, Speaker of the House of Representatives, delivering the oration. Work was continued to 1854, when a height of 170 feet was reached, and at the same time the bottom of the treasury of the society. Not more than four feet has been added since.

An effort was made February 22, 1855, to secure an appropriation of $200,000, but it was defeated. These reports have been made at previous sessions of Congress, each urging a completion of the work, but nothing was done until July 27,1876, when Mr. Foster’s bill passed the House.

The plan of the obelisk is nearly that of Lieutenant Marshall, which discarded the “grand circular colonnated building 250 feet in diameter and 100 feet high, * * * surrounded by thirty columns of massive proportions, surmounted by an entablature twenty feet high, and crowned by a massive balustrade fifteen feet in height.”

When completed this monument will be the highest of any monument, obelisk, dome or spire, as seen by the following table:

The address of the association to the people of the United States gives this description of the site:

“It presents a beautiful view of the Potomac; is so elevated that the monument will be seen from all parts of the surrounding country, and being a public reservation, it is safe from any future obstruction of view.

“In addition to this, and kindred reasons, the adoption of the site was further and impressively recommended by the consideration that the monument to be erected on it would be in full view of Mount Vernon, where rest the ashes of the chief; and by the evidence of Washington himself, who, with unerring judgment, had selected this site to be the capital of the nation, and had also selected this very spot for a ‘monument to the American revolution,’ which, in the year 1795, it was proposed, should be erected or placed at the permanent seat of government of the United States.”

Mr. Foster’s bill, as it passed the House, is an amendment to the Senate bill. The amendments doubled the amount appropriated, and averaged the payments in annual installments of $50,000 each. It only remains for the concurrence of the Senate to cause a revival of the enthusiasm which gave the society a third of the total cost of construction, and in five years the monument will be completed.

The Congress Commemorative Gold Five-Dollar Coin shows with an image of the proposed completion of the Washington Monument, circa 1877. 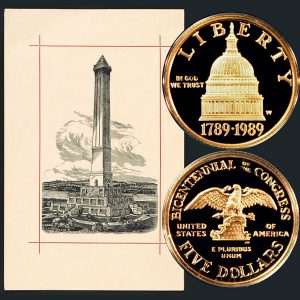