Today, the Cleveland Centennial Commemorative Silver Half Dollar Coin remembers the 100th anniversary of the founding of the settlement named after Moses Cleaveland.

From the Marietta [OH] Daily Leader newspaper in July 1896:

The Forest City Celebrate Her One Hundredth Anniversary In Grand Style— The Speech-Making Programme Was Elaborate.

Cleveland, O., July 23. Elaborate preparations have been made for the big “New England dinner” Thursday on the campus of Adelbert college. The arrangements are in the hands of the New England society of Cleveland, the members of which are all lineal descendants of the settlers who came from Connecticut, Massachusetts and Vermont to the western reserve early in the century.

Everything in the menu is characteristic of the occasion. Guests are present from every town in the western reserve.

Gov. Coffin, of Connecticut, Gen. Joseph R. Hawley and ex-Gov. Morgan G. Bulkely, with many other friends from the east, left the Hollenden hotel at 12 o’clock for the campus.

Maj. McKinley returned from Alliance at the same time and was driven to the scene, where a great assemblage of men and women from the rural district of the reserve gave him a hearty welcome.

President Cleveland sent the following message which was read by James H. Hoyt:

“I congratulate the citizens of Cleveland upon the close of her first centennial and wish it may be only the beginning of her greatness and prosperity.”

The dispatch was warmly applauded. A centennial ode written for the occasion by Col. J. J. Platt was read and then Gov. Coffin was introduced. He was heartily greeted by the audience.

His speech was short. It was historical in tone and full of gracious compliment to Ohio, to Ohio men and to the people of Connecticut.

At the close of Gov. Coffin’s speech, the audience rose to its feet and gave three cheers for “old Connecticut.”

J. G. W. Cowles, of Cleveland, announced that John D. Rockefeller authorized him to say that he offered as a gift to the people of Cleveland, 276 acres of land for park purposes, valued at more than $600,000.

Gov. Bushnell, made a short speech of welcome to the Connecticut and other eastern guests. He was followed by Maj. McKinley, who was given a cordial greeting.

In his speech the major said:

“In point of government, education, morals, business thrift and enterprise, Cleveland may well claim recognition with the foremost, and is fairly entitled to the warmest congratulations and highest eulogies on this, her centenary day. Nor will any envy her people a season of self-congratulation and rejoicing.”

After the exercises at the armory a reception was given Maj. McKinley at the Hollenden hotel by the Loyal Legion. About half-past two o’clock a great military and civic parade got under way, and it entertained the Cleveland people and their visitors the rest of the afternoon.

At 8 o’clock Wednesday night the handsome centennial arch which spans Superior street in the public square burst into light, the button which turned the electric current into its myriad of burners having been pressed by President Cleveland at Buzzard’s Bay.

The Cleveland Centennial Commemorative Silver Half Dollar Coin shows with an image of the City Hall, circa 1896. 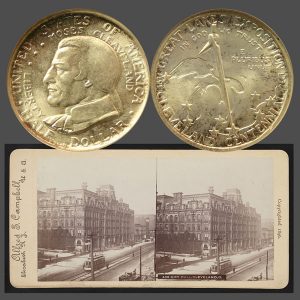