Today, the Massachusetts State Quarter Coin remembers when Isaiah Thomas began his newspaper on July 17, 1770 and six years later printed the first instance of the Declaration of Independence for his state.

Thomas, Isaiah, printer; born in Boston, Mass., Jan. 19, 1749; was apprenticed to a printer seven years, and started business for himself in Newbury port, Mass., when he was eighteen years of age. In 1770 he transferred his printing establishment to Boston, and on July 17, 1770, began the publication of the Massachusetts Spy, which became the champion of the colonies contending for right and justice. The government tried to suppress it, but in vain. After the skirmish at Lexington (April 19, 1775) he transferred his establishment to Worcester, where he continued to publish the Spy until 1801, when it was continued by his son from that time until 1819.  …

In the Worcester Magazine of June 1901, an excerpt of Nathaniel Paine’s Worcester’s Old Common, With Some of Its Neighbors and Incidents discusses the importance of Isaiah Thomas and his newspaper:

Another episode of great historical interest which took place within the limits of the present Common was the reading of the Declaration of Independence from the porch of the Old South church.

The Declaration of Independence was passed by Congress on the evening of July 4, 1776. and signed on that day by President John Hancock and the secretary, Charles Thompson, but was not signed, in its completed form, by the members, till the second day of August following.

Immediately after its passage, it was “Resolved that copies of the Declaration be sent to the several assemblies, conventions, and Committees of Councils of Safety, and to the several commanding officers of the Continental troops, and that it be proclaimed in each of the United States and at the Head of the Army.”

As soon, therefore, as copies could be printed, it was sent by couriers to the different States.

Having been first publicly read at Philadelphia the 8th of July, it was received in New York, at Washington’s headquarters, on the 9th, and in the evening it was read at the headquarters of each brigade.

By some means, however, rumors of the passage of the act had reached Worcester in advance of the messenger with the printed copy, for in the “Massachusetts Spy” of July 10th was the following announcement: —

“It is reported that the Honorable Continental Congress have declared the American Colonies independent of the Monster of imperious domination and cruelty — Great Britain! Which we hope is true.”

The confirmation of this rumor was received in Worcester on Saturday, the 13th, or Sunday, the 14th of July, and was read publicly for the first time in New England by Isaiah Thomas, the publisher of the Massachusetts Spy, from the roof of the west porch of the Old South meeting house, and also on Sunday, after service, in the house itself.

The old porch was removed many years before the building itself was taken down, and for several years served as part of a house on Grafton street.

Mr. Thomas, with true journalistic enterprise, intercepted the messenger of Congress on his way through the town, and secured a copy of the important document, and it was printed in the “Spy” of July 17, for the first time in any newspaper in Massachusetts.

The Declaration was read in Boston on the 18th of July, from the balcony of the State House, by Col. Thomas Crafts, to an immense concourse, including not only the loyal people, but many of the British officers and men who were held as prisoners in Boston.

Four days later, the first public celebration of its adoption took place in Worcester, and is thus reported in the “Spy” of the 24th:

“On Monday last a number of patriotic gentlemen of this town, animated with a love of their country, and to show their approbation of the measures lately taken by the Grand Council of America, assembled on the Green, near the liberty pole, where, after having displayed the colors of the 13 Confederate Colonies of America, the bells were set a ringing and the drums a beating, after which, the Declaration of Independence of the United States was read to a large and respectable body (among whom were the selectmen and committee of correspondence), assembled on the occasion, who testified their approbation by repeated huzzas, firing of musketry and cannon, bonfires and other demonstrations of joy.

“When the arms of that tyrant in Britain, George the III, of execrable memory, which in former times decorated, but of late disgraced the court house in this town, were committed to the flames and consumed to ashes; after which, a select company of the sons of freedom, repaired to the tavern, lately known by the sign of the King’s Arms, which odious signature of despotism was taken down by order of the people, which was cheerfully complied with by the innkeeper.

“Toasts were offered upon this occasion, among which were the following: —

“Prosperity and perpetuity to the United States of America. The President of the Grand Council of America. The Grand Council of America. His excellency, George Washington. The Patriots of America. Every Friend of America. George rejected and liberty protected. Sore eyes to all the Tories and a chestnut burr for an eyestone. Perpetual itching without the benefit of scratching to the enemies of America. Speedy redemption to all the officers and soldiers who are now prisoners of war among our enemies. The Selectmen and Committees of Correspondence for the Town of Worcester. May the enemies of America be laid at her feet. May the freedom and independency of America endure, till the sun grows dim with age, and this earth returns to chaos.”

The report says : — “The greatest of decency and good order was observed, and at a suitable time each man returned to his respective home.”

These comments of Charles E. Stevens in his Notes on the Churches of Worcester published in the New England Magazine of February 1892 disagree with one part of the story but not the overall importance:

Old South Porch. The picturesque story of Isaiah Thomas reading the Declaration of Independence from the roof of the Old South porch on Sunday, July 14, 1776, has long been current in Worcester.

After careful investigation, I am sorry to be obliged to say that the story is at present only an unverified tradition.

So far as I have discovered, it first appeared in “Lincoln’s History of Worcester,” sixty years after the alleged occurrence.

Later publications, a half dozen, more or less, repeat the story without essential variation. But neither Lincoln nor any other writer give any authority for the story.

Even the late Judge B. F. Thomas, who repeats it in his “Memoir” of his grandfather Isaiah, gives no hint of its source.

Benjamin Russell, who at the time was an apprentice in the Spy office at Worcester, is reported by Jos. T. Buckingham as having told him that “when the Declaration was received in Worcester, it was read by Thomas to an assembly embracing almost the whole population of that and the adjacent towns.”

But Russell, who bore a somewhat notable part in what went on, says nothing about the date nor the porch reading; moreover, his statement that almost the whole population of the “adjacent” towns was present, is obviously inconsistent with the story.

But the great, if not decisive fact to its discredit is the silence of contemporary history.

In the Massachusetts Spy published in Worcester, Wednesday, July 17, 1776, there is no hint of such an occurrence, nor is there in any subsequent number.

This silence is the more noticeable, because in the number for July 24 there is a detailed and graphic account of the celebration of the great event on the “green around the liberty pole,” with the reading of the Declaration on Monday the 22d.

If the reading from the roof had taken place eight days before, it is incredible that the newspaper of the town should not have given an account of it.

The importance of the story lies in this, that in this way Worcester is supposed to be entitled to the honor of having first promulgated the Declaration in Massachusetts.

But the failure of the story does not deprive the town of this honor.  For the Spy of July 17, 1776, contained the Declaration in full; and not until the next day, the 18th, was it promulgated in Boston, the only other possible rival for the honor.

This was the official proclamation from the balcony of the Old State House; meanwhile, the citizens of Worcester and vicinity had been given ample time to “read, mark, and inwardly digest ” the great epoch- making manifesto. 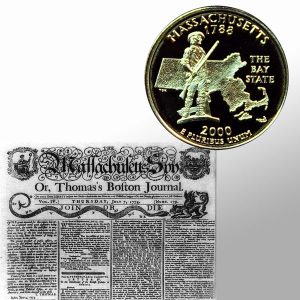