Today, the New York State Quarter Coin remembers when the Niagara Falls Reservation opened to the public on July 15, 1885.

From the Johnson’s (Revised) Universal Cyclopaedia: A Scientific and Popular Treasury of Useful Knowledge, Volume V, published in 1890:

The Niagara Falls reservation—sometimes loosely denominated the Niagara Falls Park, and improperly so, as it is in no sense a park in the usual acceptation of that term—is the outcome of a prolonged and laborious agitation.

The neglected condition of the shores of the great cataract, and the annoyances and extortions to which travelers were subjected, had for many years been the occasion of severe criticism.

The first public step toward a reclamation was the message of Gov. Lucius Robinson to the N. Y. legislature in 1879. Referring to a conference between Lord Dufferin, then governor-general of Canada, and himself in the previous summer, the governor urged the enclosure “of a suitable space on each side of the river from which annoyances and exactions should be excluded.”

He recommended the appointment of a commission to consider and report upon the subject. The legislature by joint-resolution referred the matter to the commissioners of the State survey, by whom a very thorough examination was made, the results of which were presented with much clearness and force in an admirable report prepared by the director of the survey, Prof. James T. Gardiner, and laid before the succeeding legislature.

They recommended the acquisition by the State of a limited area about the Falls. Memorials to the legislature bearing the endorsement of a host of distinguished men, both here and abroad, urged immediate action.

An association of the most prominent men in the country was formed to enlist the sympathy of the people and rouse them to an adequate sense of the importance of speedy action in order to save Niagara.

Apart from a very general and natural shrinking from the large outlay which it was believed such a purchase would necessarily involve—and which the event showed was overestimated—a considerable opposition was developed on the art of many who doubted the propriety of the State intervening for a work of sentimental, as it was termed, rather than of practical, utility.

The reply was that the possession of this great natural wonder imposed a trust upon the people of the State, and that, its proper administration being inconsistent with private ownership, the higher title of the State must be invoked to furnish the relief.

Analogies were drawn from the various educational endowments of the State.

After three years of unsuccessful effort these arguments prevailed to secure the passage of the first Niagara bill, on Apr. 30, 1883. It provided for the appointment of a commission by the governor to locate, survey, and appraise the lands necessary for such a reservation.

The commission proceeded at once to fix upon an area sufficient to secure the free enjoyment and proper protection of the Falls.

This area, which coincided substantially with the recommendation of the State survey, included Goat Island, Bath Island, The Three Sisters, Bird Island, Luna Island, Chapin Island, and the small islands adjacent to them in the Niagara River, and also a strip of land on the shore, beginning near Port Day and running to and including Prospect Park.

This latter strip is from 100, to 200 feet wide through the greater portion of its length. The whole area includes 106 acres.

It was carefully surveyed, under the direction of the State engineer and surveyor, by Mr. Thomas Evershed, engineer of the Western division, and a detailed map prepared, which is filed in the office of the secretary of state.

Legal proceedings in which the commissioners were represented by Messrs. Allen Movius & Wilcox of Buffalo, were commenced to secure an appraisal of the lands included in this area.

Messrs. Luther R. Marsh, Matthew Hale, and Pascal P. Pratt were appointed by Judge Daniels as appraisers Jan. 26, 1884. On Sept. 22 the appraisers made their report, which was subsequently confirmed.

Setting aside the vast claims of the land-owners for alleged water-rights in the stream, they awarded a total sum for the entire area of $1,433,429.50.

On the presentation of the commissioners’ report (Senate Document No. 35), the acquisition of the reservation was authorized by the legislature.

An act was passed appropriating a sum sufficient to pay the awards and authorizing an issue of bonds for the purpose.

On July 15, 1885, the reservation was declared open with impressive and appropriate ceremonies. The governor of the State, David B. Hill, with many distinguished guests, was present.

Speeches were made by Gov. Hill, Hon. William Dorsheimer, president of the commission, Hon. Erastus Brooks, the lieutenant-governor of Ontario, and others, and an oration of unusual grace and dignity was delivered by James C. Carter, Esq., of New York.

The administration of the reservation was placed under the charge of the commissioners before named. Hon. Thomas W. Welch of Niagara Falls became the first resident superintendent, and Mr. Leighton Williams the secretary and treasurer.

The legislature of Ontario authorized a similar reservation on the Canadian side of the Falls. A commission was appointed, and a survey was made.

The Canadian Niagara Falls reservation was opened to the public June 22, 1887, without ceremony, and is called the Queen Victoria Niagara Falls Park.

It is not necessary to enlarge on the importance of the work now happily inaugurated by two great nations.

As to the ancient world the Pillars of Hercules, the portal through which the waters of the Mediterranean mingled themselves with the outer ocean, were invested with an awful grandeur, so from the time when Father Louis Hennepin two hundred years ago described the “vast and prodigious Cadence of Water which falls down after a surprising and astonishing manner, insomuch that the Universe does not afford its Parallel,” the Falls of Niagara, the outgate of a chain of mightier inland seas, have been possessed of a transcendent interest for the world.

“The State of New York,” said Mr. Carter in the speech above alluded to, “has done many memorable things which illumine her annals—she has erected great structures dedicated to charity; she has established a great system of universal education; she has raised and sent into the field vast armies to defend liberty and perpetuate the great nation of which she forms a part—but in no single act has she shown herself more worthy of her renown or of the place she fills in the nation and in the world than by avowing, as she does to-day, her intention to forever guard and secure this spot against all profanation for the delight, the elevation, and the improvement of mankind.”

The New York State Quarter Coin shows with a map image of the Niagara Falls Reservation. 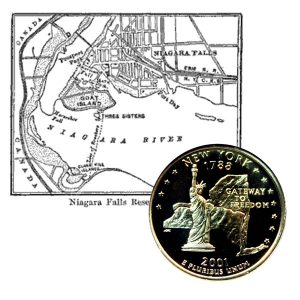