Today, the Hawaiian Sesquicentennial Commemorative Silver Half Dollar Coin remembers when the islands as a Republic became a Territory on June 14, 1900.

The American Statesman’s Yearbook, edited by J. Walker McSpadden, published in 1912 summarized  the islands’ history and provided their status:

The Hawaiian Islands, forming the northeastern group of Polynesia, in the Pacific Ocean, lie between latitude 18° 54′ and 22° 15′ N., and between longitude 154° 50′ and 160° 30′ W. There are eight inhabited and several small uninhabited islands in single file, extending about 400 miles from southeast to northwest. The area of the group is 6,449 square miles. The islands are of volcanic origin and are all mountainous.

It is thought that Gaetano discovered the islands in 1555. Cook visited them in 1778 and called them the Sandwich Islands. Vancouver, in 1792, visited the islands and introduced the first cattle and sheep. The first constitution was proclaimed October 8, 1840. In 1843 a provisional cession of the islands was made to Great Britain, but their independence was restored in the same year. Kamehameha I had become master of the whole island of Hawaii in 1791, and his dynasty lasted until 1872.

David Kalakaua was elected by the Legislature in 1874. Two years later a reciprocity treaty was ratified with the United States. Liliuokalani succeeded her brother in 1891, and was dethroned two years later for attempting to establish an absolute monarchy.

In the following year the Republic of Hawaii was organized, with Sanford B. Dole as President. An annexation treaty was drawn up in 1893, and 5 years later was ratified.

On June 14, 1900, Hawaii Territory was organized as a Territory with Dole as Governor.

There are three governing bodies: Executive, legislative, and judiciary. The executive power is vested in a Governor and Secretary, both appointed by the President for four years. The Governor appoints the other executive officials and department heads. The Governor receives $7,000.

The Legislature is composed of two houses—a Senate of 15 members elected for four years, and a House of Representatives of 30 members, holding office for two years. Sessions are biennial and are limited to 60 days. Members receive $400 a year.

The judicial power of the Territory is vested in a Supreme Court, with three judges, 5 circuit courts, 29 district courts, and other inferior courts established by the Legislature. The judges are appointed by the President.

The Territory is represented in Congress by a delegate who is elected for two years by popular vote. The present delegate is J. Kuhio Kalanianaole, Republican. He received 8,049 votes to 4,503 for L. L. McCandless, Democrat, and 989 for C. K. Notley, Home Ruler. The present Territorial Legislature is almost entirely Republican.

All public schools are under a territorial department of public instruction, consisting of a superintendent and six commissioners appointed by the Governor from the four principal islands.

In 1912, the number of all schools was 207, with 882 teachers, and 29,909 pupils. The total expenditure for education was $582,535. There is a normal and training school, a reformatory industrial school, and a college of agriculture and the mechanic arts.

The soil of the islands, despite their mountainous and volcanic nature, is very fertile. Sugar, rice, coffee, pineapples, rubber, tobacco, and cotton are produced.

The sugar industry continues to grow notwithstanding that it has long been many times larger than all other industries combined. The present crop is estimated at 555,000 short tons, as compared with 518,127 tons for last year and 535,156 tons for the year before, which was the largest yield up to that time.

The pineapple industry, which is comparatively new, has grown with such rapidity that it now ranks second to sugar. The pack for each season is approximately 610,000 cases; it is estimated that it will soon increase to 800,000 cases or more annually. Much additional land is being planted, which will greatly increase the output during the next few years.

The Territory generally raises enough live stock to supply local demand; but not dairy and poultry products. There are 100,000 cattle and 80,000 sheep. Importations of meat increase, on account of tourist traffic.

In 1909 the Territory of Hawaii had 500 manufacturing establishments, which gave employment to an average of 7,572 persons during the year and paid out $2,795,000 in salaries and wages. Of the persons employed, 5,924 were wage earners. These establishments turned out products to the value of $47,404,000, to produce which materials costing $25,629,000 were consumed. The principal industries are rice cleaning, pineapple preserving, and sugar making.

During the last eight years, the imports from continental United States have practically doubled

Honolulu is the chief port, and is a port of call for trans-Pacific traffic.

There are about 250 miles of railroad in the islands. Honolulu has 22 miles of electric roads.

Sixteen banks were in operation during the year 1911, as compared with 11 during the preceding year. These were distributed as follows: Seven at Honolulu, on the island of Oahu; 1 at Lihue, Kauai; 1 each at Wailuku, Kahului, and Lahaina, Maui; 2 at Hilo, and 1 each at Honokaa, North Kona, and North Kohala, Hawaii. Another was opened on July 1, 1911, at Waimea, Kauai. One of the banks is solely a savings bank, 2 are solely commercial banks, while the remainder are both commercial and savings banks.

The National Guard, Jan. 1, 1911, consisted of 9 companies of infantry, one hospital company, with a total force of 46 officers and 521 men. Army engineers and coast artillery are busy constructing military defenses. Detachments of United States cavalry, infantry, and marines are stationed at the various posts.

The Hawaiian Sesquicentennial Commemorative Silver Half Dollar Coin shows with an image of Honolulu, circa 1900. 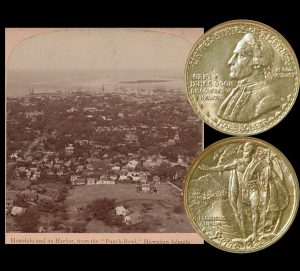