Today, the Ohio State Quarter Coin remembers on June 4, 1859 the heavy frost in that state and others in the north.

From the Cleveland [OH] Morning Leader newspaper of June 7, 1859:

Sad Effects of the Frost!

From all quarters come reports of the sad havoc made in the vegetable kingdom by the frost of Saturday night.

The cold weather of the two days previous had led the farmers to fear a heavy frost if the wind should go down, and the results show that their fears were too well grounded.

We have hastily collated such information as we have received, and condensed it as given below. From these reports we find that in the neighborhood of the city the damage is comparatively slight, but farther South, as we recede from the influence of the Lake, the greater damage to everything.

Even the forest trees have their foliage blackened in some exposed situations.

Bellevue — Fruit and vegetables cut off. Corn and potatoes cut down.

Berea — Vegetables and fruit cut off, and wheat doubtful. Grass not hurt. Corn and potatoes cut down to root.

Warrensville and Collamer — All vegetables killed. Fears are entertained that the wheat is killed. Grass and clover kilted in patches.

We further understand by Conductor Crawford, of the Mahoning Road, that the frost was severe in Trumbull county, and injured the wheat to some extent. Corn and potatoes were cut down on the line of the whole road.

Frost not severe in immediate neighborhood of the Lake Shore.

We learn that in portions of Medina count the apples are killed, and of course peaches, &c , shared the same, untimely fate.

We learn by the Pittsburgh Gazette that on Saturday morning, June 4th, between 3 and 4 o’clock, there was for a few moments a smart flurry of snow. The thermometer at 6 o’ clock Saturday evening, had fallen to 44 degrees.

On Coal Hill corn and potatoes were cut down, and the Gazette of Monday says—”If half the rumors which were flying last evening are correct, all sorts of crops are cut down. We do not credit the stories.”

The conductors on the train from Philadelphia to Pittsburgh, report that a thick coating of ice was to be seen on standing water. The ground was white with frost.

Off Point Pelee on the Lake, there was quite a severe snow squall Saturday forenoon. The clouds spit occasional flakes in this quarter.

The Columbus Journal of Monday says:

We are informed by Gen. Buttles, of the State Board of Agriculture, that the severe frost Saturday night, did not injure the wheat in the slightest. The corn was laid to the ground, however, but this be of little matter, as it was not jointed. Such another frost will not probably occur this season. Small fruits and vegetables in the gardens throughout the city are much damaged, but this can be afforded if the great wheat crop remains uninjured.

Sad accounts keep coming to us of the effects of the frost in the country about. It was at first hoped that it did not extend into New York so that the harvests there would be saved, but a gentleman from Batavia tells us that in Oneida County the injury done is very great. He says that he covered his greenhouse plants and vegetables about 9 o’clock Saturday night, fearing a frost, but the next day found them nearly all blighted, the injury having been done previous to his closing the frames. All along from that place to this the fruit trees are blackened, and the vegetables cut down.

In all the neighborhood of Cleveland the damage done is great especially to grapes and peaches. A part of the apple crop is destroyed, principally the late varieties which are still in or but just out of bloom.

Grapes are a total loss, except in few cases where shelter was afforded by buildings or otherwise. At the Angier House farm, on the St. Clair road, three acres of fine grapes are entirely cut off.

Corn and potatoes are cut down to the ground, but these will spring up again and be two weeks behind the late growth. Nearly all garden vegetables are done for.

But the wheat crop, as a general thing is not injured. In some townships heard from, some fields seem to be blasted, but not extensively. If this great staple is uninjured, the other losses can be better borne. A private letter from Fredericksburgh dated the 5th, says:

“As far as we can ascertain, we think the wheat is perfectly safe—have examined several fields today and can see, as yet, nothing wrong. It looks nice and green and stands up as well as ever. Everyone from the country says the same. The corn along the bottoms is well “cooked;” oats are not hurt to any amount, so we have had a narrow escape. As for our part we believe the wheat is good and safe, and if the weevils let it alone, we look for a good crop. Great many of the grains are half made and some are nearly full size. The corn will row out again and can be replanted.”

Telegraph returns from Zanesville and some the middle counties say the wheat is much damaged.

The full extent of the frost is not ascertained, —  It is to be hoped that the great corn and wheat fields of Illinois have not been hurt.

At Painesville an occasional hill of potatoes, &c., would be blasted while those on each side were left uninjured.

In Warrensville, the grass and clover is blasted as if with a fire in spots twenty or thirty feet square while that around is as green and fresh as ever.

In Berea, one man to protect a favorite grape vine, buttoned his overcoat around it, but to no purpose, for the vine withered and died when the sun came out.

Another man spread a whole bolt of cloth over a row of beans in blossom, but they were frozen through it.

The Ohio State Quarter Coin shows with an image of a heavy spring frost. 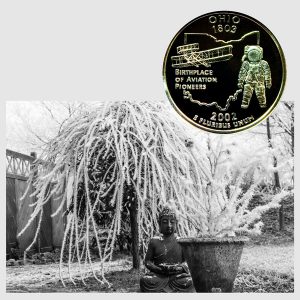