Today, the Barber Silver Dime Coin remembers the pickpocket school that was prevalent in the 1890s. Of course, pickpockets still exist, and there must be more schools throughout the years.

Young Thieves To Be Tried.

Boy Pickpockets Arraigned in Court and Held in $500.

An Older Crook Caught In Central Park by Officer McGee.

Bernard Ragofsky, of 3 Allen street, and Mendel Mendelovitz, of 47 Ludlow street, aged fifteen and thirteen years respectively, arrested Sunday afternoon by Park Policeman McGee for picking pockets in the Central Park monkey house, were each held in $500 bail for trial by Justice Voorhis this morning In Yorkvllle Court.

Young Mendelovitz says that a regular school for the instruction of pickpocket’s has for years been flourishing on the east side, and that Artful Dodgers are graduated there by the dozen.

Mendelovitz’s mother, who was in court this morning, told Justice Voorhis that she had no knowledge of the work the boy was concerned in.

Ragofsky is evidently older In crime and has learned the lesson of silence. Both boys as they stood before the Justice’s desk, rested their hands on its edge. The popular idea that a slim hand, with taper, flexible lingers, is characteristic of the professional pickpocket, had ample verification in both cases.

The older boy, in particular, has a hand that any lady might be proud of. It is soft and slim, and the fingers from the second joint tapered to the filbert-shaped nail.

The fingers looked as if they might have been moulded by the continued wearing of long thimbles. The police think this by no means improbable.

Ragofsky’s brother, Nathan, who said he was twenty-two years old, and a cigar-maker, appeared In court. Nathan said that Bernard lived with him at 3 Allen street. Both of the boy’s parents, he said, were in Poland. He had brought Bernard to America two and a half years ago.

For the first six months, he said, Bernard lived with an uncle in Baltimore, and two years ago came to New York. Nathan said that Bernard was a peddler, and that was what he thought he was doing during the day.

Justice Voorhis tried to make Nathan admit that some jewelry he wore had been given him by his younger brother, but he denied this emphatically, declaring that he knew nothing of the lad’s stealings.

According to Mendelovitz’s story, he had been taught to pick pockets by Abe Solomon, who, he said, lived in Suffolk street, between Grand and Hester, and has been teaching boys the art of thieving for the last four years.

Associated with Solomon, the boy said, was Barney Jubal, who lives in Ludlow street in the same block with Mendelovitz. There were also one Yedditch, of Division street, near Clinton; a young man named Tepp, and Philip Quatsky, who acted as instructors and showed the pupils how to extract articles of value from people’s pockets.

Quatsky laid out the work for Mendelovitz on the day the latter was arrested. The Bowery, Battery Park and Central Park were favorite fields for the pocket-picking industry, the boy said.

Central Park was, he said, “dead easy graft” since the un-uniformed detectives had been replaced by the gray coated policemen.

Inspector McLaughlin said this morning that he had not heard about the alleged school for pickpockets, but would investigate the story. He was inclined to think, however, that the lad had been romancing.

Capt. Schultz, of the Delancy street station, in whose precinct the alleged Fagins live, according to Mendelovitz, started out this morning with Detectives Shalvey and Hussey, to gather in the men named if they could be found. No arrests had been made up to noon to-day.

Park Policeman McGee caught another pickpocket in Central Park yesterday. MeGee’s last prisoner is Frank McGrath, aged twenty-four, who said he is a waiter out of work, and lives at 246 West Twenty-seventh street. He was found plying his vocation in the tiger house.

At 4:40 o’clock in the afternoon one of the tigers had a fit and a crowd gathered in front of his cage. Among those present was Mrs. Mary Grraper, of 100 Seventh avenue. McGee saw McGrath’s hand in her dress pocket and caught hold of his arm before he had time to withdraw it. He was held for trial in $500.

A young pickpocket was held for trial by Justice Koch to Essex Market Court today. He is Nathan Zauzer, sixteen years old, of 445 Rodney street, Brooklyn. He is said to have stolen a silver watch from Abraham Lipstein, of 141 Stanton street, while the latter was looking in a Norfolk street show window. Joseph Sparer, twelve years old, witnessed the theft and caused the arrest of Zauzer.

The Barber Silver Dime Coin shows with an artist’s image, circa 1891, of a pickpocket school teaching the art of thievery. 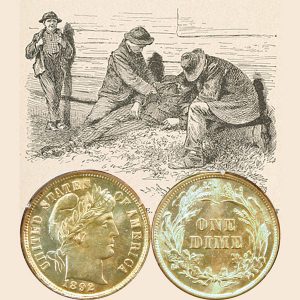