Today, the Chief Justice John Marshall Commemorative Silver Dollar Coin remembers when the Supreme Court agreed in favor of the Chicago Board of Trade on May 8, 1905.

It Holds That Dealing In Futures Is Not Gambling and That Quotations of Prices Are Property, and as Such Are Entitled to the Protection of the Law

The long fight of the Chicago Board of Trade to prevent the delivery of its grain and provisions quotations to “bucket shops” was crowned with success today when the Supreme Court in effect held that the record of transactions on the Exchange were property which could be protected by law and gave sanction to the issuance of injunctions to restrain bucket shops from receiving these quotations.

Incidentally, the court also held that the transactions by the members of the Board of Trade were not gambling transactions, even though actual deliveries of grain or provisions were not made on three-fourths of their sales, and that dealings in futures are a legitimate part of modern business and of great importance to the business world.

The cases disposed of today grew out of diverse decisions by the Circuit Court of Appeals, one of them sustaining the contention of the Christie Grain and Stock Company that dealings in futures were gambling under the laws of Illinois, and declining on that ground to grant relief, while the other affirmed the action of the lower court restraining the L. A. Kinsey Company, a bucket shop concern, from receiving the Board of Trade quotations.

The Board of Trade says if Justice Holmes, in delivering the opinion of the majority, is in the first place a great market, where, through its 1800 members, is transacted a large part of the grain and provision business of the world. Of course, in a modern market contracts are not confined to sales for immediate delivery. People will endeavor to forecast the future and to make agreements according to their prophecy. Speculation of this kind by competent men is the self adjustment of society to the probable. Its value is well known as a means of avoiding or mitigating catastrophes, equalizing prices and providing for periods of want.

It is true that the success of the strong induces imitation by the weak and that incompetent persons bring themselves to ruin by undertaking to speculate in their turn. But legislatures and courts generally have recognized that the natural evolutions of a complex society are to be touched only with a very cautious hand, and that such coarse attempts at a remedy for the waste incident to every social function as a simple prohibition and laws to stop its being are harmful and vain. The court had already upheld, in the Clews-Jamieson case, the sales of stock for future delivery.

It could not be doubted that when the Board of Trade was incorporated it was expected to afford a market for future as well as present sales, with the necessary incidents to such a market, and while the State of Illinois allowed that charter to stand the court could not believe that the pits, merely as places where future sales were made, were forbidden by law. The set-off system of making settlements on the Board, the court holds, had all the effects of delivery, and the ring settlement was simply a more complex case of the same kind which in no degree detracted from the good faith of the parties.

While no actual delivery of grain or provisions was made in three quarters of the transactions, Justice Holmes said, there was no doubt that a large part of them were made for serious business purposes. It seemed an extraordinary and unlikely proposition that the dealings which gave its character to the great market for future sales in this country were to be regarded as mere wagers, or as “pretended” buying or selling without any intention of receiving and paying for the property bought, or of delivering the property sold, within the meaning of the Illinois act.

“Such a view,” says Justice Holmes, “seems to us hardly consistent with the admitted fact that the quotation of prices from the market are of the utmost importance to the business world, and not least to the farmers: so Important, indeed, that it is argued here and has been held In Illinois that the quotations are clothed with a public use. The fact that the volume of transactions called for many times the receipts of grain in Chicago does not affect the case. It was no more wonderful than the enormous disproportion between the currency of the country and the contracts for the payment of money.”

As to the right of the board to protect its quotations, the opinion says that they stood like a trade secret and were entitled to the protection of the law. Its rights were not lost by the fact that they were supplied to others under contract. Even if the information concerned illegal acts it would still be entitled to protection. The statistics of crime were property to the same extent as any other statistics, even if collected by a criminal who furnished some of the data. The claim that the contracts between the board and the telegraph companies whereby the quotations were not to be furnished to bucket shops constituted a monopoly in restraint of trade is dismissed by the court as without merit. The injunctions asked by the Board of Trade were simply restraints on the acquisition for illegal purposes of the fruits of its work and they therefore should be granted.

The Chief Justice John Marshall Commemorative Silver Dollar Coin shows with an image of the Chicago Board of Trade in session, circa 1905. 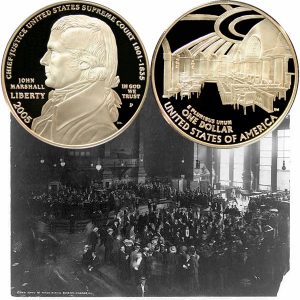