Today, the Oregon State Quarter Coin remembers the unveiling and dedication on May 2, 1901 of the monument highlighting the men who chose to become part of America 58 years earlier.

The Salem, Oregon Daily Journal newspaper of the following day summarized the events:

Notes on Some of the Characters Fading Into the Mists

The Pomona took on 141 roundtrip passengers at Salem. The threatening rains early in the morning prevented many going, the modern denizens of cities being more tender of the weather than the robust pioneers they were assembling to commemorate. A fine crowd it was, enjoying the trip from start to finish.

The first historic spot passed was the Methodist mission about ten miles below Salem, where the missionary families received $500 a year maintenance from the east, held a monopoly of cattle, and wrote letters back to their friends dated Wallamut. The cattle monopoly was broken in 1843 when Capt. Gale drove in some large herds.

The cattle business reminds us that the event commemorated at Champoeg grew out of a so called “Wolf Meeting,” where men assembled to discuss means of abating the wolves and other varmints that made the ownership of livestock impossible, to say nothing of developing the cattle industry.

The second cattle drive had started from California and this public meeting was the outgrowth of former gathering to make possible the distribution and preservation of the stock that was coming. The hunter, trapper and adventurer were as important factors in promoting civilization by killing wolves as the missionaries were in saving an occasional poor devil’s soul.

In August 1845 John Minto, J. S. Smith and Henry Williamson took the mission property in charge, buying it of the father of Jos. Carter, present Supt. of the Blind school who was born at the Mission and was a silent spectator on board the boat as she proudly rounded up and took on board a lone Chinaman with his pack.

Minto and Smith organized a debating society and conducted the first kissing bees and other social attractions of the early pioneers. They would dance all night and go home with the girls in the morning, several riding one horse. The young men sometimes danced in moccasins and sometimes barefoot. But dancing was then, as now, a primitive trait of the race.

Davidson’s landing recalls the story that here was where the steamer Elk blew up. Capt. Jerome was blown through the pilot house, and coming down he met a deck hand going up and promptly gave him the order “to make fast the boat.” The Elk had a sheet iron hull and set the pace for that order whose members are all constructed of boilerplate below the waterline.

The steamer reached Champoeg just before noon, picnickers dispersing to the woods where lunches were spread and then all collected at the speaking stand erected just on top of the bank from the boat landing. There was a nicely decorated bower, seats for several hundred, a flagpole and considerable evidence of enterprise on the part of this little community.

Snapshot artists were busy at work whenever the sun came out a few moments. As a center of attraction was the monument itself, but the crowd around prevented very many pictures being taken, and frequently an immodest person would poke the head around in time to spoil someone’s view of an historical object.

At one time a fine view presented itself on the river below the site of the monument—five good-sized river steamers with flags flying and all lying with bows to the bank. Forty or fifty years ago this was head of navigation, freight between Portland and Salem being teamed to and from Champoeg.

Governor Geer presided and introduced P. S. Knight of Salem who offered an invocation. The Governor then read the opening address. The seats provided in front of the speaking bower were mostly occupied, people in the rear standing, a gentle mist spraying an occasion sacred in Oregon history.

There were people present from all the surrounding towns, a crowd such as old Champoeg has not seen in years. It reminded old-timers of the days when it was the metropolis of the state, the county seat of Champoeg county, a rival metropolis with Portland, ambitious to regain the state capitol, but having no calaboose, a dozen horse races, footraces and several free fights every Saturday.

An original poem by Mrs. Abigail Dunniway was read. The address by Harvey Scott was read by Willis Scott Dunniway. Just before this Governor Geer announced that one of the original signers of the Oregon Declaration of Independence, F. X. Matthieu would unveil the monument, which he did.

The monument is not an imposing affair. It looks as if it might cost about $275.99. It is said to have cost half that to letter the monument. The two men whose names on that monument entitled to greatest credit, next to Joe Meek, were Etiene Lucier, whose son was present—Peter Lucier of Gervais—and Francis Xavier Matthieu who sat on the platform.

Not over a quarter of the crowd heard the proceedings. The rest hobnobbed around the edges, visited old friends and chatted with neighbors. There was no opportunity for a handshake with the only living hero of the occasion, the one man living who was present and followed Joe Meek when he asked that the crowd to take sided between John Bull and Uncle Sam.

The reading of dry historical papers at the old Champoeg landing was rather tame proceedings compared to the real oratory heard there when Joe Meek took the international bull by the horns, and in these words made the greatest speech in the history of the northwest:

The speeches—or papers—for there was really no offhand talking or attempts at oratory—will all be printed and that is the way to read them. No such papers are appreciated by a great mixed audience—and there were two or three thousand present. Yet so charmed were some of the hearers, like Judge Murphy and some others, they got left and the steamer had to go back for them.

The grand audience gradually dwindled away until Rev. Hines had only a few hundred to perorate at, and Uncle John Minto who really had a paper with a little old-fashioned fire in it wound up the program. Such and occasion deserved a few bursts of oratory, a few sentences to make the blood tingle, a few ringing sentiments of patriotism. It is all right to flatter Great Britain as a matter of diplomacy, but if they had ever under the bold leadership of one single-handed man like Joe Meek wrested a territory like Oregon, from which were carved the better part of five commonwealths, on an occasion like this there would have been a little ginger, glue and cayenne pepper.

They would erect a statue of that hero, and would have rubbed it into the other fellows, waved the flag and done some crowing an flapping of wings. Oratory and patriotism are not dead in the hearts of the masses of American people, and some day there ought to be a celebration at Champoeg where there would be a little more display of fireworks and waving of the flag.

Talking with some of the original settlers The Journal reporter was informed that among the French people this landing was known as “Champement de Sable.” The Indians dug a root on the hills opposite, so Fabian Rivet informs me, called “poeetsic.” Out of that “rootwood” and the French “Champement” was devoluted, or devilooted the corruption, or bastard etymology at present known in the maps as Champoeg. Of course, Champoeg it will be, but to the French belongs the honor of naming the place and French it should remain.

The dedication of the Champoeg monument has established a new date that may be observed each year. Once a year the people of Oregon should make a pilgrimage there, renew the spirit of Americanism, enterprise, and hardihood characteristic of the pioneers.

The Union Cornet band furnished some appropriate selections. Souvenir programs were distributed containing the names of the fifty-two persons who voted May 2, 1843, to organize the first American government on the Pacific coast, picture and short biography of F. X. Matthieu, with sketch of Oregon Historical Society under whose auspices the memorial was erected.

The Oregon State Quarter Coin shows with an image of the unveiling of the Founders Monument on May 2, 1901. 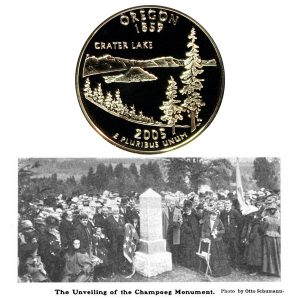