Today, the Rhode Island Commemorative Silver Half Dollar Coin remembers when Representative Davis put forth a bill on April 18, 1899 to revoke the expulsion of Roger Williams in 1635.

From the Journal of the House of Representatives of the Commonwealth of Massachusetts for 1899:

Met according to adjournment, at hall-past ten o’clock A.M. Prayer was offered by the Chaplain.

By Mr. Davis of Cambridge, petition of Cephas B. Crane and others that the sentence of expulsion passed against Roger Williams by the General Court of Massachusetts Bay in 1635 be revoked. Referred, under the 12th joint rule, to the next General Court.

A New York subscriber to Book Notes asks it for an account of the “revocation” of the Decree of Banishment passed in 1635 against Roger Williams; the Newport Herald gave, on the 24th of April, an account of the matter in which it said:

“A petition praying for a revocation of the edict was presented to the Bay State Legislature last week and will be favorably acted upon immediately;” but it was not so acted upon, and the Herald goes wrong in saying that “Roger Williams may now return to Massachusetts if he wants to without running any risk of being arrested.”

The facts are as follows:

The following Petition, dated Cambridge, Mass., Dec. 21, 1898, was presented to the Massachusetts House of Representatives on the 18th of April, 1899:

Resolved—We the citizens of Cambridge, Mass., and others—Petition the Honorable Legislature—at your earliest convenience to pass—

God Save the Commonwealth of Massachusetts.

In the year one thousand eight hundred and ninety-nine.

Resolve to provide for the revocation of the sentence of expulsion of Roger Williams, passed by the General Court of Massachusetts Bay in 1635.

Resolved, That the sentence of expulsion passed against Roger Williams by the General Court of Massachusetts Bay in the year sixteen hundred and thirty-five be revoked.

The long delay in presenting the Petition prevented any action, for the reason that the time had expired in which new business could be presented; it was referred, under the rule, to the next General Court.

The moving spirit in the matter was the last signer upon it, the Rev. T. M. Merriman of Cambridge, an aged clergyman, who is the author of a book hearing this title: “The Pilgrims, Puritans and Roger Williams vindicated; and his Sentence of Banishment Ought to be Revoked.”

It was published in Boston in 1892, by Bradley & Woodruff. The author is a Baptist clergyman, brimful of Baptist bias, and his book not only preserves all the old errors, but creates new ones; Book Notes called attention to some of them at the time the book was issued.

This revocation scheme has once before been tried, and failed, let us hope now that the result will be the same; it is absurd nonsense.

A revocation can change nothing.

The General Court acted sufficiently erroneous in 1635; everybody knows that it would do no such thing now; but why attempt to expunge a record which cannot be expunged.

The Rhode Island Commemorative Silver Half Dollar Coin shows with an image of the Massachusetts state house, circa 1899. 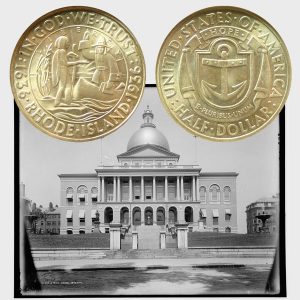