From the Northwestern Law Review of January 1894:

Rodgers was indicted under § 5346 of the Revised Statutes for an assault with a dangerous weapon committed on board the steamer Alaska, a vessel owned by citizens of the United States, while it was in Detroit River, within the territorial limits of the Dominion of Canada.

Section 5346 provides that “Every person who upon the high seas, or in any arm of the sea, or in any river, haven, creek, basin or bay within the admiralty jurisdiction of the United States, and out of the jurisdiction of any particular State, on board any vessel belonging in whole or part to the United States, or any citizen thereof, with a dangerous weapon, or with intent to perpetrate any felony, commits an assault on another, shall be punished by a fine of not more than three thousand dollars and by imprisonment at hard labor not more than three years.”

Rodgers filed a plea to the jurisdiction of the court, which was demurred to, and upon this demurrer the judges of the Circuit Court of the United States were divided in opinion, Circuit Judge Howell E. Jackson holding the court had jurisdiction, District Judge Henry B. Brown that it had not.

Both judges have had an opportunity to review their previous opinions, having since become members of the highest court of the nation.

The opinion of the Supreme Court, delivered by Mr. Justice Field, takes the ground that by the usage of international law the words high seas designate open, unenclosed waters of any sea, waters without the fauces terræ of the coast; that the Great Lakes are seas within the meaning of the statute, and therefore the Detroit River, connecting two of the lakes, is a river within the contemplation as well as the terms of the act.

“If there were no seas other than the ocean the term ‘high seas’ would be limited to the open, unenclosed waters of the ocean.” The Mediterranean, Black and Baltic seas are all given as illustrations of high seas: the Sea of Galilee is referred to as showing the use of the word sea is not confined to international, salt and tide waters.

It is argued that the term “high seas” must include the Great Lakes, for the statute expressly covers rivers, and “it would not be reasonable to suppose that congress intended that no remedy should be afforded for similar offenses committed on vessels upon the lakes, to which the vessels on the river, in almost all instances are directed, and upon whose waters they are to be chiefly engaged.”

Justices Gray and Brown dissent. Mr. Justice Gray, in a very learned and ingenious opinion, accepting the view that the high seas mean the same as main sea or open sea, collects authorities on international law to the effect that the ‘open sea’ is navigable of right by all nations and belongs to none, pointing out that the Great Lakes are the exclusive territory of Great Britain and certain of the United States, and that no precedent was shown of the use of the words “high seas” to include fresh, tideless, territorial waters.

He argues that the word river is to be construed with reference to its context, which clearly shows that congress had in mind rivers opening into the ocean. Instead of, like the majority of the court, inferring that these lakes are “high seas” within the meaning of the act because connected with a “river . . . . within the admiralty jurisdiction of the United States,” he infers that the Detroit River itself is not included by the statute because it is not adjacent to the “high seas.”

Mr. Justice Brown refers generally to his previous opinion on the same subject in Ex parte Byers, 32 Fed. Rep. 404 (1887), a case which arose out of the same transaction as the principal case. He affirms that at the time the statute was originally drafted [in 1790] the lakes were not in appreciable use for purposes of navigation, and bases his opinion especially on the context “or in any arm of the sea, or in any river, haven, creek, basin or bay within the admiralty jurisdiction of the United States and out of the jurisdiction of any particular state.”

Both dissenting judges rely upon the rule that criminal statutes are to be construed strictly. Both concede the power of congress to pass a statute that would cover a similar case to the one before them.

In that case Mr. Justice Brown, in the course of a very interesting opinion, had said: “That the lakes are not ‘high seas’ is too clear for argument,” referring to Ex parte Tyler, 7 Mich. 161 (1859), where the Supreme Court of Michigan had held that the United States Courts had no jurisdiction in such a case.

In the Michigan case Chief Justice Martin and Manning, J. held the federal statute unconstitutional, these waters not being included within the admiralty powers conferred by the constitution, Christiancy, J., being evidently of the same opinion, but agreeing with Campbell, J., that the statute, whether constitutional or not, could not properly be construed to cover the great lakes and connecting waters.

It was not until 1851 that the doctrine was established that the Great Lakes were within the admiralty and maritime jurisdiction of the United States. The Genesse Chief v. Fitzhugh, 12 How. 443.

Upon the whole, the correctness of the construction adopted by the majority of the court in United States v. Rodgers seems so doubtful, that it ought not to prevail in the interpretation of a criminal statute.

The whole discussion about the meaning of “high seas” is extrajudicial unless the context is to be controlling in the construction of the statute. If it is to be so controlling, the words “or in any arm of the sea” immediately following “high seas” would seem to show clearly that congress had in mind the ocean, to which alone the term the sea is properly applicable.

To say that because there are other seas than the ocean there are other high seas, is to beg the question, for the expression “high seas” is technical in international law, as much so as if the two words were one, and may in its technical use refer only to the ocean.

We find an instance of the use of the words in what the context shows to be such a technical meaning in the Constitution itself, Art. I, Sec. 8, Par. 10, “The Congress shall have power . . . . to define and punish piracies and felonies committed on the high seas, and offenses against the law of nations.” The authorities collected in the opinions seem to indicate that the latter is its technical meaning.

What makes the above decision of additional interest is that by the act of March 3, 1885, 23 St. L. 438, congress adopted certain “Revised International Rules and Regulations for Preventing Collisions at Sea” to be followed in the navigation of all public and private vessels of the United States upon the high seas and in all coast waters of the United States except such as are otherwise provided for.”

Section 2 of the act repeals all inconsistent laws “except as to the navigation of such vessels within the harbors, lakes and inland waters of the United States.”

Collision cases involving this point are said to be now held under advisement by both Judge Swan and Judge Seaman. [The names of these distinguished jurists lead us to expect superior information on all subjects relating to waters.]

If the words “lakes and inland waters” mean only such as are not “high seas” we must have a catalogue of these lakes properly so called, to be worked out at the expense of litigants.

Whatever may be said about the vessels, their captains on the Lakes are for the present certainly at sea.

The Chief Justice John Marshall Commemorative Silver Dollar Coin shows with an image of a steamer, circa 1890. 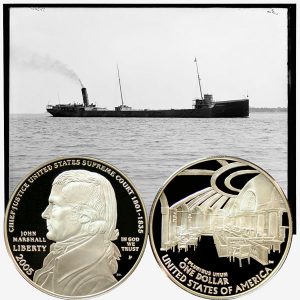