Today, the Morgan Silver Dollar Coin remembers the christening of the battleship Illinois on October 4, 1898 and the gift to her sponsor.

From the Washington, DC, Times of the following day:

Royal Gift to the Waves

The Launching of the Noble Battleship Illinois.

Brave Sight in the James

Forty Thousand Persons Cheered Ecstatically, Many Whistles Blew Noisily, and Myriad Flags Waved Triumphantly at the Words of Miss Leiter Christening the Proud Craft, and Giving Her to Freedom and the Sea

Many Distinguished Persons Present At the Banquet, Later in the Afternoon, the Sponsor Was Presented With a Beautiful Miniature of the Ship Done in Beaten Gold and White Enamel.

Newport News, Va., Oct. 4. Forty thousand persons witnessed the launching of the battleship Illinois at the plant of the Newport News Shipbuilding and Dry Dock Company here this afternoon.

The time set for the event was 11 o’clock one hour before high tide, but it was an hour and a half after that time when the great throng of people whose patience was about exhausted, was carried away in ecstasy.

At 12:83 o’clock this afternoon the last plank which held the big hull in its position on the ways, was sawed in two and as the cradle began to move toward the water with its great mass of iron and steel, Miss Leiter, of Chicago, christened the new fighting monster in the time-honored manner by breaking a bottle of champagne over the bow.

As she threw the handsomely decorated bottle against the prow of the vessel, she exclaimed, in a clear and ringing voice, audible for some distance: “I christen thee Illinois!”

Cheers for the Noble Craft.

The new addition to Uncle Sam’s navy was given a hearty welcome by the great crowd, as well as by every whistle in the stream, and as she drifted out into the channel many tugs, all gaily decorated, gathered around her, each one anxious to have a share in towing her to the pier nearby.

This was one of the prettiest launchings ever witnessed here—that of the Kentucky and Kearsarge not excepted.

The vessel moved steadily and majestically from the first, and had she been as far from the water as were the other vessels, thus giving her a longer run, the event would have been even more interesting.

The waters of the James River were never prettier, and as the waves lazily lapped the shore they almost washed the stern of the new vessel, while the workmen hurried the work of getting out the props.

A Clear Sky and Light Breezes.

The day was all that could be asked for. Early in the morning there were several showers, and the prospects for a good day were rather gloomy, but by 10:30 o’clock the sky began to clear up, only enough water having fallen to lay the dust, which had begun to fly around to such an extent as to be stifling.

The hot October sun broke out, and soon everybody was complaining of the heat, but later light breezes came gently from across the blue waters of the James.

Never before has any section of the country been represented in an Eastern city by as large and as representative body as was the State of Illinois and surrounding States here today.

The party on the christening stand at the bow of the vessel was the center of attraction. Here, in the midst of a crowd of admiring friends, was Miss Leiter, the sponsor.

In addition to those already mentioned, there were present at the launching Assistant Secretary of the Navy Allen, who arrived this morning from the Portsmouth navy yard, on the President’s dispatch boat Dolphin; Assistant Secretary of War Meiklejohn, who arrived at Old Point Comfort last night; Senator William E. Mason, of Illinois, accompanied by Mrs. and the Misses Mason; Secretary Finney, private secretary to the Secretary of the Navy; Secretary Wilson, of the Department of Agriculture; Congressman Foss, of Illinois; Captain Paget, British naval attaché at Washington. Gen. Mestrago, Russian naval attaché; M. Kenney, Italian naval attaché; M. Boeufve, French naval attaché; Judge Advocate General and Mrs. Lemly, and the following well-known Chicagoans: Gen. Reece, A. M. Rothschild, J. M. Truitt, C. D. Osborne and a host of others.

After the specially invited guests of the company had been escorted about the yard, they repaired to the steamer Newport News, which took them to Old Point Comfort.

There the party went to the Chamberlain Hotel and were entertained at a banquet by the builders of the man-of-war.

At the banquet Gov. Tanner presented Miss Leiter with a miniature of the ship, done in beaten gold and white enamel. The souvenir is made in the form of a badge. The ship is represented lying broadside on. The model is three inches in length and carries all the guns, life boats, the flag, jack, and banner of the original reduced to scale.

Below the ship, suspended by two gold chains, swings the great seal of the State of Illinois, also of beaten gold.

On the back of this is inscribed:

Governor of the State of Illinois.

The souvenir is a work of art, every detail of the ship being worked out to a nicety. The costume Miss Leiter wore on today’s occasion was of pearl silk with trimmings of the same color. It was made especially for the occasion. She wore no jewelry whatever.

The Morgan Silver Dollar Coin shows with an artist’s image of the Battleship Illinois, circa 1898. 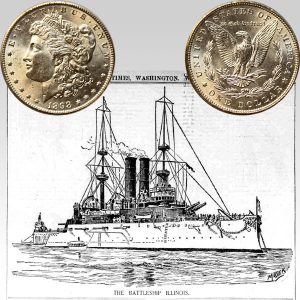