Today, the Lewis & Clark Commemorative Silver Dollar Coin remembers when the Expedition met with the Teton Indians and almost lost one of their boats to the tribe on September 25, 1804.

In the Journal of Captain Clark, we are given an account, in his curiously misspelled English, of an encounter, about the end of September, with the villainous Tetons, whose lodges the Expedition had now come to in their passage up the Missouri.

The leaders of the tribe, in accordance with custom, had been invited to a friendly conference with the whites, and they and some of their people were afterwards asked to inspect at close quarters the Expedition’s chief vessel.

What followed is thus narrated by Clark, prefaced by some little detail of the meeting with the Tetons:

On the morning of September 25th, relates the Journal, we raised a flagstaff and an awning, under which we assembled, with all the party parading under arms.

The chiefs and warriors from the camps two miles up the river met us, about fifty or sixty in number, and after smoking we delivered them a speech; but as our interpreter, M. Dorion, had been left with the Yanktons, we were obliged to make use of a Frenchman who could not speak fluently, and therefore we curtailed our harangue.

After this we went through the ceremony of acknowledging the chiefs, by giving to the grand chief a medal, a flag of the United States, a laced uniform coat, a cocked hat and feather; to the two other chiefs, a medal and some small presents; and to two warriors of consideration, certificates.

The name of the great chief is Untongasabau, or Black Buffalo; the second, Tortohango, or the Partisan; the third, Tartongawaka, or Buffalo Medicine; the name of one of the warriors was Wawzinggo; that of the second, Matocoquepa, or Second Bear.

We then invited the chiefs on board, and showed them the boat, the air-gun, and such curiosities as we thought might amuse them.

In this we succeeded too well; for, after giving them a quarter of a glass of whiskey, which they seemed to like very much, and sucked the bottle, it was with much difficulty that we could get rid of them.

They at last accompanied Captain Clark on shore, in a pirogue with five men; but it seems they had formed a design to stop us; for no sooner had the party landed than three of the Indians seized the cable of the pirogue, and one of the soldiers of the chief put his arms round the mast.

The second chief, who affected intoxication, then said that we should not go on; that they had not received presents enough from us.

Captain Clark told him that he would not be prevented from going on; that we were not squaws, but warriors; that we were sent by our Great Father, who could in a moment exterminate them.

The chief replied that he too had warriors, and was proceeding to offer personal violence to Captain Clark, who immediately drew his sword, and made a signal to the boat to prepare for action.

The Indians, who surrounded him, drew their arrows from their quivers, and were bending their bows, when the swivel in the boat was instantly pointed toward them, and twelve of our most determined men jumped into the pirogue and joined Captain Clark.

This movement made an impression on them, for the grand chief ordered the young men away from the pirogue, and they withdrew and held a short council with the warriors.

Being unwilling to irritate them, Captain Clark then went forward and offered his hand to the first and second chiefs, who refused to take it.

He then turned from them and got into the pirogue; but he had not gone more than ten paces when both of the chiefs and two of the warriors waded in after him, and he brought them on board.

We then proceeded on for a mile, and anchored off a willow island, which, from the circumstances which had just occurred, we called “Bad-humored Island.”

The union of firmness with gentleness which marked the command, in its relations with the Tetons, not only averted what might have been serious trouble, but enabled the party to gain the respect, if not the amity, of the tribe; though it was found difficult to eradicate from the minds of the Tetons hostile designs upon the Expedition, in the way either of destroying it or of effectually barring its progress.

The next day, better thoughts having prevailed, and the tribe manifesting a more amicable disposition, friendly relations were renewed.

Such was the improved state of things between the red and the white men, that the representative men of the tribe came, in a contrite mood, to the leaders of the Expedition and begged that their squaws and young folk might be allowed to see the exploring party and look over the boats.

This, of course, was agreed to; and when the visitors had had their fill of sights and were about to withdraw they expressed their delight at what they had seen, and, in turn, invited the whites ashore to a pow-wow, feast, and dance.

The Lewis & Clark Commemorative Silver Dollar Coin shows with an image, circa 1810, of the men meeting with Indians. 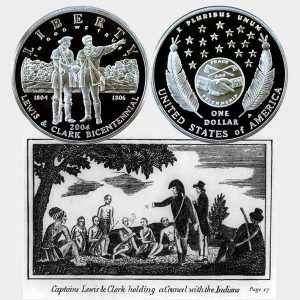