Today, the Zachary Taylor Presidential One Dollar Coin remembers when Captain Taylor prevented the enemy’s success during the siege begun on September 4, 1812.

From the Battles of the United States, By Sea and Land; by Henry Barton Dawson, published in 1858:

This frontier post was on the bank of the Wabash, a short distance above the present town of Terre Haute, Indiana.

It was garrisoned with a small party of the Seventh regiment of infantry, under the command of Captain Zachary Taylor, who, with his command, had suffered severely from sickness; and, at the time of the action now under consideration, only ten to fifteen effective men were within its lines.

On Thursday evening, the third of September, two young men—settlers in that vicinity—were killed and scalped in the immediate neighborhood of the fort; and late in the evening of the next day, some thirty or forty Indians, and about ten squaws, from the Prophet’s town, came to the fort and desired admission.

They were generally chiefs of the several nations composing that band of fanatics, among whom was Joseph Lenar; they carried a white flag; and one of their number informed Captain Taylor that they desired an interview for the purpose of obtaining something to eat.

As Captain Taylor had been warned of the approach of this party, and of its hostile intentions, by the neighboring Miamis, before it had reached the fort, the arms of the garrison were examined at retreat-beating, found to be in good order, and the supply of cartridges in the boxes increased to sixteen rounds per man.

Unusual precautions were also taken to prevent a surprise, as the weakness of the garrison prevented the detailing of more than six privates and two non-commissioned officers for guard duty; and when the guards were set they were enjoined to be vigilant in the discharge of their duties.

At eleven o’clock the fire of the sentinels alarmed the commandant and the garrison, when it was discovered that a block-house, which formed a part of the exterior line of the works, had been set on fire by the Indians.

The lower part of the structure was occupied by the contractor as a store-house for the garrison’s supplies, while the upper part was occupied by a corporal and ten men, as an alarm-post; and its destruction would not only deprive the garrison of provisions, and jeopardize the barracks which adjoined it, but, at the same time, would open a space of eighteen or twenty feet in the outer works of the fort.

Orders were, accordingly, given to get the buckets ready, and to extinguish the flames; but so slowly were these orders obeyed, that the fire had communicated with a barrel of whiskey, and the whole interior of the block-house was in flames, and beyond the control of the garrison, before any steps were taken to extinguish them.

In fact, the entire garrison appears to have been filled with the greatest alarm, and to have fallen into the utmost confusion; and this, with the yells of the savages,—who had been joined by several hundreds of others, who had, probably, been concealed in the immediate neighborhood,—and with the cries of nine women and children, who had taken shelter in the fort, rendered the situation of the entire fort and garrison somewhat questionable.

The gallant commandant, amid all this confusion, appears to have retained his presence of mind; and he immediately ordered that portion of the roof of the barracks which was nearest the burning block-house to be thrown down, and the end of the barracks to be kept wet; quieting the fears of the men, at the same time, by endeavoring to convince them that by a prompt obedience to this order, the barracks might be saved and the enemy repulsed.

The success of this effort fully realized the expectations and desires of the commandant; and every man appeared to be inspired with new life.

With a degree of deliberate courage, which more nearly approached desperation, the invalids and convalescents manned the two bastions and the remaining block-house, and by opening and keeping up a well-directed fire on the Indians, they held them in check, and protected that portion of the garrison which was engaged in checking the progress of the flames.

The men who were able to do so, with Doctor Clark at their head, mounted the roof of the barracks, and, in a few seconds, threw off that portion of the roof which was in jeopardy, with the loss of only one man killed and two wounded.

The end of the barracks, although it was several times in flames, was effectually preserved; and the space which the block-house had occupied was all which was exposed.

Notwithstanding the enemy kept up a constant and well-directed fire on every man who showed himself, for upwards of eight hours, the garrison had managed to raise a temporary breastwork, before daylight, and every effort of the wily enemy was frustrated.

A constant fire was kept up by the savages until six o’clock on the morning of the fifth, when the garrison opened on them, “with some effect,” and they immediately removed beyond the reach of the guns, and ceased to disturb the gallant captain and his little party.

Not to be entirely disappointed, however, the assailants immediately collected the horses, cattle, and hogs of the neighboring farmers, shooting the hogs within sight of the garrison, and driving off the cattle.

The horses they attempted to secure; but failing to accomplish this, to any considerable extent, they immediately shot them, also, within sight of the garrison.

During the day (Sept. 5th) the garrison strengthened the temporary breastwork, which had been erected in the opening of the exterior line, which the destruction of the block-house had occasioned, by erecting a row of strong pickets within it, the timbers for which were obtained by tearing down the guard-house.

The savages, after hovering around the fort all the day and succeeding night, decamped on the morning of the sixth, without making any farther attempts on the fort.

The little garrison, by this desperate and successful operation, saved the post and the lives of those who had sought refuge within the lines; although the destruction of the block-house deprived it of the entire stock of provisions which had been provided for its use, and compelled it to subsist entirely on green corn, until a fresh supply could reach the post from Vincennes.

The number of the entire garrison did not exceed fifty; those who were effective, not more than “ten or fifteen” men.

That of the enemy comprised all the force they could raise in that part of the country, and they had assembled with a determination to take the fort either by stratagem or force.

The loss of the latter, of course, is not known; the garrison lost three men killed and three wounded—all the former and one of the latter while disobeying or disregarding the orders of their commander.

Captain Taylor and his party merited and received the thanks of the country for their gallant and successful defense of the post.

The Captain received a brevet commission as Major—commencing, at this time, that series of brilliant exploits, which was continued until the close of his campaign in Mexico, when a grateful and admiring people rewarded him by bestowing the greatest of all human honors—their voluntary suffrages for the office of President of the Republic.

The Zachary Taylor Presidential One Dollar Coin shows with an artist’s portrayal of Fort Harrison in 1812. 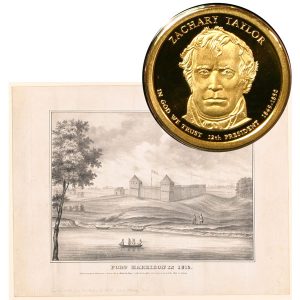