Today, the Morgan Silver Dollar Coin remembers the efforts of the rainmakers in August of 1891.

From the Fort Worth Gazette:

Forecasts for the Next Storm Wave — Its Course.

The Rain-Makers — Mr. Foster Discusses Their Methods and Gives Uncle Sam a Friendly Tip About What Should Be Done.

Special to the Gazette

My last letter gave forecasts of the storm wave due to cross the continent from 22d to 26th and the next will be due to leave the Pacific coast about August 27, cross the Rocky Allegheny valley from 28th to 30th and reach the Atlantic coast about the 31st.

Very hot weather will precede this storm wave, and severe local storms may he expected.

Comparatively the weather will be quiet throughout August, preparatory to the great storms to follow.

The weather will average hot during the last half of August and the first half of September after which a decided change may be expected.

I will repeat, that all should be prepared for an early and hard winter especially in all that country drained by the Mississippi river and the Western great lakes.

Those who wish to save corn fodder will need to do so early.

Late corn in the Northern corn belt will need to be cut before it is mature, to save it from early frost.

I expect a killing frost in the northern edges of the corn belt on September 17 or 18 with a probability that frost will do some damage on the 13th or 14th.

Not much rainfall is expected from the storm wave of 27th to 31st but rather an increase of the drouth areas.

Local rains will continue to be of the cloud burst nature.

Continuing the discussion of the national weather maps I must add that the weather bureau does not recognize the fact that a high and low barometer, constituting an electric pair, often form within a low barometer or storm center, and in failing to recognize this fact both the forecasts and the maps became deficient.

Cloudbursts, waterspouts, and tornadoes are small low barometers of great force and much lower than the low barometer in which they are formed, although they are usually far from the center of the general low barometer.

They cause terrific upspouts of atmosphere and must be fed by a correspondingly high barometer and downpour of atmosphere, which often form within the general low barometer.

The weather-map artists failing to recognize this important fact draw their solars and isotherms so as to make it appear that chaos reigns where in reality is the most perfect order.

Let us give them a fair hearing.

I hope the press will not be so unfair with them as it was with me five or six years ago.

The first experiment by the rainmakers in Texas was somewhat favorable to their theories in that the experiment was performed where a drouth has been affecting the country and in a climate that averages only a small rainfall.

But on the other hand there were three storm waves due to cross the Rocky Allegheny valley from August 5 to 13 and their dates had been announced in my letters and southern routes predicted for them.

Mercury passed its greatest disturbing point on the 6th and an increased amount of foggy, cloudy weather had been predicted.

The moon passed its greatest disturbing point on the 9th, and the storm center that would be most affected by those disturbances was due to pass east of the Rocky mountains on the 10th.

The weather maps show that a storm wave had moved from the Pacific coast and its low barometer was in New Mexico, its high in Montana on the 9th, and rains had fallen from Manitoba to Southwestern Colorado.

The movement of the storm wave was very favorable to rains in Texas on the 10th, but we cannot say that rains would have fallen without the explosions of dynamite and powder.

The experimenters have a right to choose the most favorable time for their tests and to locate their tests in the path of the moisture from the Gulf of Mexico.

Midland, Tex., is one of the most arid localities in the state, but for several years past they have had a very considerable rainfall.

Under the circumstances a number or successful experiments will be necessary before the public will be convinced that rain can be produced by explosions at an expense which the government can afford to pay.

But rainmaking is a matter of great importance to the public, and $9000 is not sufficient to thoroughly test the theory.

Even if the theory does not promise much, congress should make a liberal appropriation and have it more thoroughly tested.

The Australian who has been making rain in Ohio is also attracting much attention.

It will be observed that he, also, selects for his experiments the days on which the storm waves are due, and this proves him to be a close observer.

If he is correctly understood, his scheme is the opposite of the bombardment plan.

The latter is by expansion causing a rising atmosphere and a consequent suction, drawing the moisture and clouds to a focal point.

The Australian’s theory appears to be that of condensing the atmosphere by chemicals, thereby causing an in-draught and a drawing together of the clouds and moisture by that means.

Both theories are correct, and the only question is as to their practicability.

It is not doubted that under favorable circumstances rain can be produced by either of these processes, but the amount and expense are the great questions.

The theory of the Australian should be given a fair test, and although he has not asked it, congress should make a liberal appropriation for testing it.

Nearly one fourth of the tillable land of the earth is unproductive for want of rain, and the whole human race would be benefited if a means of economically producing rain could be found.

We are on the eve of great discoveries that will vastly benefit all mankind, and governments should be on the alert, not only to aid in making these discoveries, but also in securing the benefits to the masses and preventing corporations from turning these discoveries into means of extortion and oppression.

As a rule, the inventors, the men and women who make great discoveries, and the masses, do not receive their due portion of benefits, while corporations receive more than is their due.

The Morgan Silver Dollar Coin shows with an artist’s portrayal of two rain-making salesmen and a farmer, circa 1891. 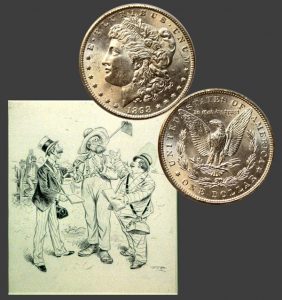