Today, the Kentucky State Quarter Coin remembers the opening day of the Southern Exposition in Louisville on August 1, 1883.

From the Memphis, Tennessee newspaper, Public Ledger of August 01, 1883:

This is a big day for Louisville and one that may be hailed with pleasure and satisfaction by the entire country.

The Southern Exposition, to be formally opened today by President Arthur, is as truly national in spirit at the Philadelphia Centennial in 1876.

It will present in admirably arranged groups the products, industries and arts of the whole country.

The progress of the century will be epitomized in a grand and a beautiful display.

As a newspaper condenses the events of a day nearly all over the world into a few dozen columns, so this Exposition gathers up and spreads out like a map the best results of intelligent effort of skilled labor and of modern development.

Whilst the Exposition is on Southern soil it is not local or sectional, and is, indeed, less liable to such a charge than the Centennial hold seven years ago at Philadelphia.

Yet it cannot fail to bring the South more prominently and favorably before the rest of the country and the world than at any time in the past.

There is a significance in all this which will be better understood when the music has died out, the banners have faded and the pleasure seeking thousands have returned to their homes and settled down to the everyday business of life.

In the history of the South no grander event has ever taken place than that which is about to immortalize our sister city, Louisville.

With commendable energy, with liberal outlay, with generous hospitality, she has pronounced the “Open Sesame” to the treasures of the South.

God speed her in her noble enterprise! should be the prayer of our Southern land.

Oh, we have had enough of war, enough of sectional prejudice, enough of heart burnings and bickerings and backbitings in the political world.

Let us all unite now to swell the great diapason of true Southern interests.

The key note had been struck, and all honor to our sister city for this great step toward the future industrial greatness of the South.

Whatever have been our political differences there is one platform upon which we all can stand and that is the development of industry and the enlargement of the resources of our country.

On this alone rests the future of our land, and what war and pestilence and sectional rivalry have failed to do in stimulating the energies of our people may be accomplished in a moment like this.

Let us rise above all urban jealousies. I have used the word with a purpose — to show the utter paradox of the idea.

Let us hold up the hands of our sister; let the Aaron of the North and the Hur of South stand on either side and hold up her bonds in this greatest of all enterprises in our Southern land.

With the exception of the London Expositions of 1851 and 1862, and the Centennial at Philadelphia in 1876, the area of this Exposition is the largest in the history of the world.

The Louisville and Nashville and Great Southern railway which has always been foremost in every enterprise that affected the interests of the South, has enthusiastically and liberally entered into the furtherance of this enterprise and has offered unparalleled inducements to visitors.

Mr. C. E. Merrell, of the Courier-Journal, who has done so much for our State by his trenchant pen and his earnest, active influence, will represent Tennessee upon the field and we do most heartily commend to our people this opportunity to show the power that is in us.

No exhibit can shame us. No State in this glorious Union can put us to the blush if only that interest is shown which the importance of the occasion so signally demands.

In my circular of May 22, directed to the citizens of Tennessee, I have endeavored to lay before them the importance — yes, the necessity — of active measures to the furtherance of this interest so grandly inaugurated in the city of Louisville.

Now it is our opportunity, and it should be a suicidal policy that would throw one straw in the way of this great march of Southern industrial progress.

The Kentucky State Quarter Coin shows with a map image of the grounds of the Southern Exposition of 1883 in Louisville. 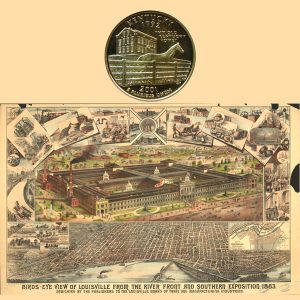