From the Public Library Quarterly, Volume 7, published in 1907, some highlights of early Independence Day celebrations:

The first anniversary of the Declaration of Independence was celebrated in Philadelphia, by members of Congress and patriotic citizens, July 4, 1777.

The bells of the city rang out joyfully during the day and evening. Shipping on the Delaware River displayed the flag that had been adopted as the banner of the new Republic.

At 3 o’clock in the afternoon there was a dinner at the city tavern, at which were the members of Congress and officers of the civil government. Patriotic toasts were offered, speeches made, and the Hessian band, which had been captured at Trenton, gave stirring music for the occasion.

During the day there were military parades, and at night the city was made glorious by fireworks and a general illumination.

Three months afterward Philadelphia was in possession of British troops.

The day was also celebrated in 1777 in Annapolis, Boston, Charleston and smaller cities and towns.

Boston, however, has the honor of holding the first real Fourth of July celebration after the close of the war.

The United States were free and independent, and Boston proposed in 1783 to celebrate the event in great style.

So there were marchings and parades, and fluttering of flags and shooting of muskets and cannon.

The Declaration of Independence was read aloud, and Dr. John Warren, Professor of Anatomy in Harvard College, made a strongly patriotic speech.

The custom, so beautiful and appropriate, was adopted everywhere throughout the land, and the plan of these celebrations has always been closely modeled after the pattern first set.

Exactly ten years after, July 4, 1793. John Quincy Adams was the orator of the day at Boston. He had not yet reached his twenty-sixth year, but his father was Massachusetts’ most prominent son, and his son was counted as in a sense his representative.

That day John Quincy Adams showed that he was something more than merely the son of his father. His address is yet considered a masterpiece, and from that day he was a power in the land, and eventually became President.

In a peculiar way the destiny of our Presidents has many times been linked with this natal day of the nation.

Of the Adams, father and son, the connection of the son’s name with the day came at the beginning of his public career, and the father’s with the close of his.

The morning of the Jubilee Fourth, July, 1826, the fiftieth anniversary of the signing of the Declaration of Independence, found four of the signers yet alive.

The sunset found but two.

On that day there passed away the immortal spirits of Thomas Jefferson and John Adams, each of whom had been President of the nation he had helped to make.

Together these men had served on the committee that drew up the historic Declaration. They had been the closest of friends, and with the exception of a few years of political estrangement, remained so until the end.

The morning of July 4th, 1826, found both the old comrades sick unto death. Jefferson sank first, with the words: “I resign my soul to God, and my daughter to my country.”

Meanwhile in his mansion, John Adams lay gasping his life away. Ninety-one years had not diminished his intellect nor weakened his courageous spirit. He heard the noise of the days’ celebration, and asked what day it was.

After he was told, he lay for awhile lost in thought, his mind reverting to those stirring times fifty years before in the State House in Philadelphia. The touch of death was on him then, and he realized it. “Jefferson yet lives!” he ejaculated, and then a little later, a sentiment suggested by the day crossed his lips, “Independence forever!” he said, and never spoke again.

Exactly five years after the deaths of Adams and Jefferson, James Monroe died, the third President to die upon In dependence Day.

He was one of the most American of American Presidents. His death, on July 4th, emphasized anew the fatality that has pursued so many of our chief magistrates upon this day.

Adams’ death left but two of the signers alive, and one of these died the next month, leaving but Charles Carroll alive.

If we except the railway built by the Delaware and Hudson Canal Company, the first railroad in running operation in the United States was the Baltimore and Ohio.

It was a happy thought of the railroad company to have the cornerstone that marked the beginning of their road laid upon Independence Day, and by the last signer left alive of the old Continental Congress.

Charles Carroll was then in his ninety-first year, but courteous and patriotic as ever. It was his last public appearance, though his feeble body bore the weight of four years more before it laid its burden down.

It was a fitting close of the last of the signers’ public acts. As he had seen the nation revolutionized politically so this pioneer railway company came to see the traffic of the country revolutionized by railroads and steam carriages. And the shaking hands of the old statesman linked the two periods together.

The Jefferson Five-Cent, Washington Quarter and Franklin Half Dollar Coins show with a flag and fireworks commemorating our freedom. 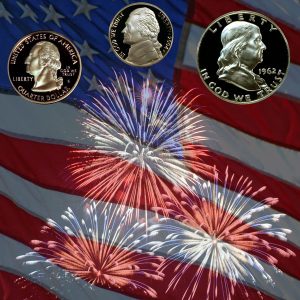