Today, the Olympic Rowing Commemorative Silver Dollar Coin remembers the boat races of June 27, 1889 and the struggle of the Columbia team.

From the Morning Journal and Courier of New Haven, Connecticut on the following day:

Six Of Columbia’s Men Fall In A Dead Faint.

Enthusiasm and Excitement at New London—The Three-Cornered Race—The Colombia Crew Collapses as They Cross the Line—Six men Fall In Dead Faint—Broken Hearted at Their Defeat—Meikelham In a Critical Condition—The Cornell Men Pull a Plucky Race.

New London, June 27. The features of today’s boat races were the exciting contest between Cornell and Columbia and the sensational collapse of the Columbia crew the instant they crossed the finish line.

When they stopped rowing six of them, Bradley No. 1, Meikelham No. 2, Robertson No. 3, O’Gorman No. 4, Clapp No. 6 and Foote No. 7 fell over in a dead faint, completely exhausted.

Five of the six broken down men recovered consciousness within a few minutes, but the sixth man, Meikelham, was unconscious for full thirty minutes.

As soon as the officials noticed Meikelham’s critical condition they steamed to the tug Wellington, and Dr. Appleton of Boston, Mass.. was summoned to attend him.

The six men mentioned above were lifted out of their shell and placed on board the Carrie Goodwin.

While these transfers were being made the two other men in the Columbia boat, Tuttle, No. 5, and Pelton, stroke, also fainted and had to be assisted out of their boat.

When the Columbia launch arrived at their quarters the entire Columbia crew were lifted out and carried to their rooms and put to bed.

The men were in pretty bad shape; they had been rowed to a standstill and had broken completely down.

Tuttle, No. 5, was quite excited and at times slightly delirious. Meikelham and several others were slightly hysterical and showed plainly the effects of the severe strain under which they had been and of the high tension of their nerves when they found themselves defeated.

Jasper Goodwin, the famous Columbia oarsman, admitted that the men were badly used up and were still under the weather, but that there was nothing serious.

From other sources it was learned that shortly after the race a boat was sent to Gale’s Ferry and a physician summoned.

This doctor is with the men now (10 p. m.), and it is understood that he will remain at the Columbia’s headquarters all night as a precautionary measure.

Many alarming rumors are current about the condition of two of the Columbias, but the Columbia men assert that they will be all right in the morning, that they pulled an unusually hard race, were out-rowed and exhausted and gave up broken hearted over their defeat.

The Cornell men, who pulled a wonderfully plucky race, are around town tonight feeling as bright and sound as a dollar.

The details of the two races are as follows:

Shortly after five o’clock the Harvard and Columbia freshmen paddled down the river and backed into position and were quickly sent away by the referee.

Harvard caught the water first and their shell at once went to the front, pulling 34 strokes. Columbia started with 38 strokes splashing badly for several strokes.

The Columbias were clearly overmatched by the heavy crew from Boston and the race was practically over after the first two minutes.

At the quarter mile Harvard had gained a lead of over a length, clear water showing between the boats.

At this point Harvard was pulling in early perfect form and their slow stroke was very effective.

Harvard dropped her stroke to 32 and Columbia to 35. In the next half mile Harvard increased her lead and at the mile flag had a lead of two lengths.

This lead they maintained to the finish, having the race well in hand and apparently not exerting themselves.

In the Columbia boat Nos. 1, 7 and 8 were pulling in poor form and there was a perceptible hang to the boat after each stroke.

The official times at each half mile were as fol lows:

After the freshman race there was a long and tiresome delay of an hour and a half before the course was cleared and the crews got into position for the much talked of three cornered race.

Cornell was the first to show, and about fifteen minutes later Pennsylvania came out. Then there was a wait of thirty minutes for Columbia.

After this several sailboats blocked the course and the crews paddled about waiting for them to be towed out of the way.

Finally at 7:30 the crews were in position ready for the word. When this was given Pennsylvania caught the water first and gained a lead of half a length. This they could not hold, and Cornell quickly dashed to the front, taking a lead of a full length with Pennsylvania and Columbia fighting for second piece.

At this point Cornell was pulling 42 strokes, Pennsylvania and Columbia 35.

At a quarter of a mile Columbia spurted and passed Pennsylvania and drew up to the Cornell boat, cutting the latter’s lead down to a quarter length.

From this point to the finish (2 3/4 miles) the race between Cornell and Columbia was the hottest and most stubbornly contested event ever rowed over the Thames course.

From the half-mile to the mile flag all three crews spurted. Columbia drew up even with Cornell and Pennsylvania was a length behind.

At the mile flag Columbia was pulling 40, Columbia 36 and Pennsylvania 36.

The positions remained unchanged and neither crew seemed able to gain an inch over the others.

For the next half mile each crew strained every nerve and the excitement was intense.

It was no use, however, and at the one and a half mile Cornell doggedly held her lead of half a length over Columbia with Pennsylvania a length behind.

Shortly after passing the one and a half mile flag Columbia succeeded in getting a lead of a quarter length over Cornell.

This advantage was retained but a short distance as they could not hold the pace.

Cornell again took the lead, and for the last mile was not headed, and on the last half mile they managed to increase their lead to two lengths finishing in an apparently fresh condition.

For the last half mile Columbia’s stroke had lost its power and it was only by the most determined effort that they held second place.

As soon as the Columbia boat crossed the line the entire crew broke down as stated above.

Cornell’s exhibition was remarkable and is the talk of the town.

With the lightest crew on the river they averaged a stroke of 40 per minute for the three miles.

Columbia and Pennsylvania could not stand the gait and were fairly and squarely outrowed from start to finish.

After the race the Cornells rowed back to their quarters, a distance of four miles.

Cornell’s victory is a very popular one.

After the race their supporters headed by a band escorted them to the Crocker House, where the liveliest kind of a celebration was kept up until a late hour.

The Olympic Rowing Commemorative Silver Dollar Coin shows with an image of a different Columbia “boat race,” circa 1910. 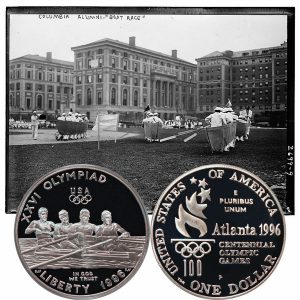