Today, the Huguenot-Walloon Commemorative Silver Half Dollar Coin remembers Coligny’s Huguenot expedition and its arrival at the mouth of Florida’s St. John’s river on June 25, 1564.

And still the great Coligny did not despair.

In 1564 the Peace of Amboise had brought a lull in the Religious Wars of France, in which he had so distinguished himself, and he was again restored to favor. Still dreaming of colonial empire for his country and his church, he promoted a third expedition.

He was a patriot and a zealot, but alas he was no colonist! Again he selected soldiers, a few artisans hired by them to spare them the ignominy of labor, and young nobles who sought only adventure; but no tillers of the soil.

Only in name were they all Huguenots. The commander was Rene de Laudonniere, a nobleman of Poitou attached to the house of which Coligny was the head; an excellent and pious mariner, who seemed worthy of the great responsibility which he assumed.

On June 25, 1564, Laudonniere’s squadron anchored at the mouth of St. Johns River, Florida, then called the River of May, where Ribaut had planted his stone monument two years before.

Le Moyne, who attained fame as a painter, was a member of the band, and he and Laudonniere, both of whom ultimately escaped the destructive carnage of the Spaniards, have left to us the story of this ill-fated venture.

Save for the catastrophe which extinguished it but fifteen months after the planting of Fort Caroline on St. John’s Bluff, a few miles below the site of Jacksonville, it is but a repetition on a large scale of the story of Port Royal: no stable foundations, no well ordered plans for permanency, no agriculture, unwise dealings with the Indians resulting in murder and war, attempts at piracy, mutiny, first the buying and then the begging of food from the Indians, temporary relief towards the end from the visiting squadron of Sir John Hawkins, the great English Admiral; a sad and interesting story charmingly and graphically told by Parkman in his Pioneers of France in the New World.

The end of the story begins with the arrival on August 28, 1565, of Ribaut, founder of the Port Royal colony, with seven ships and re-enforcement of three hundred men, to find the colonists preparing to return home in a ship which Laudonniere had purchased from Hawkins.

Possibly Ribaut had learned a lesson in colonization from the experience of Port Royal; and we may surmise that his timely arrival with men and supplies, aided by his personal qualities as a commander, might have turned the tide and brought a sound beginning to the realization of Coligny’s dream.

But it was not to be.

Just seven days after Ribaut’s arrival, Menendez, the “pious cut-throat,” appeared at the mouth of the River of May. Pedro de Menendez was a picturesque type of the Spaniard of his day. Born of an ancient Asturian family, he was from his boyhood a daring adventurer. He was a skilful soldier and mariner, and as commander of an expedition to the Indies, had acquired great wealth. He was an earnest and a zealous Catholic, and conscientiously believed that the effective promotion of the Kingdom of Christ required the ruthless extermination of all who dissented from the dogmas of Rome.

Unlike his French contemporary Villegagnon, he was no scholar and no hypocrite. He avowed his purpose to expel the French and to slay all heretics, but laid earnest stress upon the Christianizing of the Indians whose souls would otherwise be lost.

Philip II made him “Adelantado of Florida” for life, with the right to name his successor. The kingdom thus given to him, with liberal rights of trade with other Spanish colonies (a privilege usually denied) extended from Labrador to Mexico, from the Atlantic to the unknown inland depths.

His scheme was ambitious, covering among other points a garrison on Chesapeake Bay, then thought to connect with the Gulf of St. Lawrence.

The force which he organized was formidable, more than thirty ships and more than four thousand men. The flagship was of near one thousand tons burden.

But this adventurous zealot was impatient and, anxious to forestall Ribaut and reach Fort Caroline before him, he sailed in June, 1565 with eleven of his larger ships, leaving the smaller ones to follow.

The fact that when Philip II launched this expedition Spain and France were at peace shows that the want of international morals is not peculiar to our twentieth century.

In the fights and massacres that followed Menendez’ arrival on September 4, 1565, at the mouth of the River of May with five ships and over eight hundred men, he asked but one question of each band with whom he came in contact: “Are you Catholics, or are you Lutherans?”

With brutal frankness, and clearly with deep religious conviction, he announced that his mission was “to hang and behead all Lutherans whom I shall find by land or sea according to instructions from my king so precise that I have power to pardon none; and these commands I shall fulfill as you will see …. every heretic shall die.”

His first attack was unsuccessful and he sailed southward. Uniting with three more of his ships at the mouth of an inlet which he named San Augustin, he founded St. Augustine, the oldest town on the continent.

Ribaut sailed from Fort Caroline to attack the Spaniards at St. Augustine, but his squadron was scattered and his ships wrecked by an unprecedented storm.

Meanwhile the bold Menendez, taking advantage of the assistance of the elements (which he declared to be the intervention of God) and the unprotected condition of Fort Caroline through the absence of Ribaut’s fleet, marched overland through the dense forests to the Huguenot settlement, surprised the fort and butchered the entire garrison, except a handful who escaped to one of Ribaut’s ships left behind and a small number captured alive.

These prisoners he hanged on trees, and placed above their heads his justification: “I DO THIS, NOT AS TO FRENCHMEN, BUT AS TO HERETICS.”

A like fate betook the brave Ribaut and the soldiers and sailors who followed him. Cast successively in groups upon the shore near St. Augustine, Menendez met them, parleyed with them, told them that he waged war against all Lutherans “with all cruelty,” and that, if they surrendered, he would do with them as God should give him grace, received their surrender, bound their hands, and butchered them on the spot.

But the last small band he for some reason spared, and Philip condemned them to the galleys. A few had refused to surrender and escaped to Indians in the forest.

When this terrible story reached France, there was naturally much indignation.

But France had one citizen, probably a Catholic, certainly not avowedly a Huguenot, “a simple gentleman of Mont de Marsan,” Dominique de Gourgues, who, smarting under recollection of the sufferings he had endured as a Spanish galley slave, undertook to avenge this great wrong inflicted by his mortal enemy.

He concealed his purpose by obtaining a commission to kidnap negro slaves from the Niger, sold his patrimony, mustered three small vessels and one hundred and eighty men, and sailed for Fort Caroline August 22, 1567, nearly two years after the butchery of Ribaut’s and Laudonniere’s companies.

Disclosing to his crew at sea his real purpose, he met with a hearty response, and finally anchored North of the River of May, in either the St. Mary’s or the Satilla.

Here he enlisted the aid of the Indians of whom the Spaniards had made enemies by successive outrages, and attacked Fort Caroline.

He was completely successful, and, except for a few prisoners purposely kept alive, slew the entire garrison. Menendez was not among them.

The prisoners he hanged on the same trees on which his compatriots had been hanged by Menendez, and over them he wrote: “NOT AS TO SPANIARDS, BUT AS TO TRAITORS, ROBBERS AND MURDERERS.”

This “simple gentleman of Mont de Marsan,” having accomplished his gruesome mission and being too weak to attack St. Augustine, returned to France, lived in obscurity and hardship for years because of the influence of the Spanish minister, but was finally restored to favor.

His merits induced Elizabeth of England and Don Antonio of Portugal to offer him place and power, but he died of a sudden illness before he could once more fight his ancient enemies.

The Huguenot-Walloon Commemorative Silver Half Dollar Coin shows with an artist’s image of Fort Caroline, circa 1591. 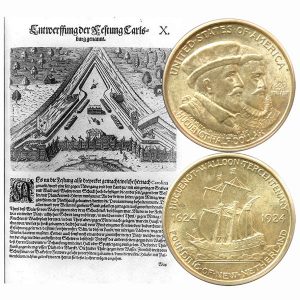