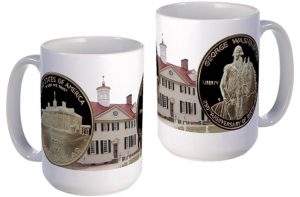 Today, the George Washington Commemorative Silver Half Dollar Coin remembers when the President personally visited the landowners in the days prior to making the proclamation of March 30, 1791.

This proclamation defined the 10×10-mile area for the city that would be the home of the new nation’s government.

Monday, 28th.
Left Bladensburgh at half after six, & breakfasted at George Town about 8; where, having appointed the Commissioners under the Residence Law to meet me, I found Mr. Johnson one of them (& who is Chief Justice of the State) in waiting — & soon after came in David Stuart, & Danl. Carroll Esqrs. the other two.

A few miles out of Town I was met by the principal Citizens of the place and escorted in by them; and dined at Suter’s tavern (where I also lodged) at a public dinner given by the Mayor & Corporation — previous to which I examined the Surveys of Mr. Ellicot who had been sent on to lay out the district of ten miles square for the federal seat; and also the works of Majr. L’Enfant who had been engaged to examine & make a draught of the grds. in the vicinity of Georgetown and Carrollsburg on the Eastern branch. Making arrangements for examining the ground myself tomorrow with the Commissioners.

In a thick mist, and under strong appearances of a settled rain (which however did not happen) I set out about 7 o’clock, for the purpose above mentioned — but from the unfavorableness of the day, I derived no great satisfaction from the review.

Finding the interests of the Landholders about Georgetown and those about Carrollsburgh much at variance and that their fears and jealousies of each were counteracting the public purposes & might prove injurious to its best interests whilst if properly managed they might be made to subserve it — I requested them to meet me at six o’clock this afternoon at my lodgings, which they accordingly did.

To this meeting I represented that the contention in which they seemed engaged, did not in my opinion comport either with the public interest or that of their own; — that while each party was aiming to obtain the public buildings, they might by placing the matter on a contracted scale, defeat the measure altogether; not only by procrastination but for want of the means necessary to effect the work; —

That neither the offer from Georgetown or Carrollsburgh, separately, was adequate to the end of insuring the object. —

That both together did not comprehend more ground nor would afford greater means than was required for the federal City; — and that, instead of contending which of the two should have it they had better, by combining more offers make a common cause of it, and thereby secure it to the district — other arguments were used to show the danger which might result from delay and the good effects that might proceed from a Union.

Dined at Col. Forrest’s today with the Commissioners & others.

The parties to whom I addressed myself yesterday evening, having taken the matter into consideration saw the propriety of my observations; and that whilst they were contending for the shadow they might lose the substance; and therefore mutually agreed and entered into articles to surrender for public purposes, one half of the land they severally possessed within bounds which were designated as necessary for the City to stand with some other stipulations, which were inserted in the instrument which they respectively subscribed.

This business being thus happily finished & some directions given to the Commissioners, the Surveyor and Engineer with respect to the mode of laying out the district — Surveying the grounds for the City & forming them into lots — I left Georgetown — dined in Alexandria & reached Mount Vernon in the evening.

On that same day, President Washington made the following Proclamation found in The Writings of George Washington from the Original Manuscript Sources, 1745-1799, Volume 31, John Clement Fitzpatrick, Editor, published in 1939.

Whereas by a proclamation bearing date the 24th day of January of this present year, and in pursuance of certain acts of the States of Maryland and Virginia, and of the Congress of the United States therein mentioned, certain lines of experiment were directed to be run in the neighborhood of Georgetown in Maryland for the purpose of determining the location of a part of the territory of ten miles square for the permanent seat of the government of the United States, and a certain part was directed to be located within the said lines of experiment on both sides of the Potomac, and above the limit of the eastern branch prescribed by the said act of Congress.

And Congress by an amendatory act passed on the third day of the present month of March have given further authority to the President of the U. S. “ to make any part of the territory below the said limit, and above the mouth of Hunting Creek, a part of the said district, so as to include a convenient part of the eastern branch, and of the lands lying on the lower side thereof, and also the town of Alexandria.”

Beginning at Jones’s point, the upper cape of Hunting Creek in Virginia, and at an angle in the outset of 45 degrees west of the north: and running in a direct line ten miles for the first line: then beginning again at the same Jones’s point, and running another direct line at a right angle with the first across the Potomac, ten miles for the second line: then from the termination of the said first and second lines running two other direct lines of ten miles each, the one crossing the eastern branch aforesaid, and the other the Potomac and meeting each other in a point.

And I do accordingly direct the Commissioners, named under the authority of the said first mentioned act of Congress, to proceed forthwith to have the said four lines run, and by proper metes and bounds defined and limited, and thereof to make due report under their hands and seals: and the territory so to be located, defined, and limited, shall be the whole territory accepted by the said acts of Congress as the district for the permanent seat of the government of the U. S.

From the “Letter Book” copy in the Washington Papers.

A draft of this proclamation, in Jefferson‘s writing, is in the Jefferson Papers in the Library of Congress, and contains the following, which was not incorporated in the proclamation as issued.

“In testimony whereof I have caused the seal of the U. S. to be afﬁxed to these presents and signed the same with my hand. Done at Georgetown aforesaid the day of March in the year of our Lord 1791 and of the Independence of the U. S. the fifteenth.”

The George Washington Commemorative Silver Half Dollar Coin shows with an image of a 1791 Map of the District of Columbia as planned by the President and the Commissioners. 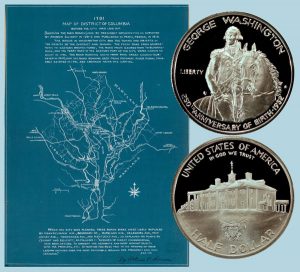