An Act to provide for the repair of the Congressional Library room lately destroyed by fire.

Be it enacted by the Senate and House of Representatives of the United States of America in Congress assembled, That the sum of seventy-two thousand five hundred dollars be, and the same is hereby appropriated to the repair of the Congressional Library room, which was lately destroyed by fire, according to the plan described in the report and drawings which were submitted by the Architect to the Secretary of the Interior, and approved by the Committee on Public Buildings of the Senate:

Provided, however, That the work shall be executed under the direction of the Secretary of the Interior, and be subject to such modification of the details as may be consistent with the general arrangements of the plan, and necessary and proper in the opinion of the President of the United States.

Sir: In compliance with the request contained in your letter of the 27th ultimo, I have made an examination of the Capitol, in reference to the extent of the injury done to the building by the burning of the Library of Congress, and the best means of repairing the damage. I have likewise prepared plans for reconstructing the Library, which are herewith submitted.

In view of the irreparable loss the country has sustained by the destruction of the old Library, I have considered it an indispensable element in the design now presented, to use no combustible materials whatever in any part of the work; the alcoves, cases, galleries, doors, window shutters, ceilings, and the brackets that support them are all designed to be cast iron; the shelves for the books of thick glass or enameled iron; the framing of the roof of wrought iron; the sheathing of copper and the floor of stone.

In a library thus constructed fire will be out of the question, and the materials of which it is formed will not be subject to decay nor deterioration.

By the plans here proposed it is contemplated to enlarge the Library so as to embrace the entire western projection; this will give a room of 29 feet 6 inches by 70 feet 2 inches at each end of the original Library, extending to the roof, lighted by skylights, with two additional apartments, each 18 feet 6 inches by 35 feet, for private reading rooms for Senators and members of the House of Representatives, respectively, thus making a suite of five rooms, embracing an extent of 302 feet.

It will not, however, be possible to carry out the entire plan until accommodations are provided in the new wings for the officers of Congress and committees now occupying the north and south rooms of the western projection.

I therefore propose to fit up the old Library according to the plans, without changing its dimensions, and to complete the archway intended to lead into the end rooms, leaving a sufficient thickness of wall remaining to separate the Library and the said rooms until the proper time arrives for carrying out the entire design.

In this portion of the plan, which, as before remarked, constitutes the reconstruction of the old Library, there will be two stories of alcoves, the second story receding 3 feet from the front of those below, so as to admit of forming a gallery on top with but little projection.

The same arrangement will be repeated on the top of the second-story alcoves, so as to form a gallery to the third story, which will consist of cases against the wall, with divisions and ornamental pilasters corresponding to the openings below.

The galleries will all be protected by continuous railings of iron. The floors of the galleries will consist of cast-iron plates, and the approach to them will be by means of two semicircular stairways formed of iron and recessed in the end walls.

Each of the lower alcoves will be enclosed by ornamental iron gates.

The ceiling will be composed of thin iron plates, cast with deep-sunken panels, filled in with enriched moldings and center ornaments.

The room will be lighted, in addition to the 5 windows in the west front, by 8 skylights, each 6 feet square in the clear, making 288 square feet of glass. Each skylight will be filled in with ornamented glass, forming part of the design of the ceiling, and protected on top by thick plates of glass placed on the line of the roof.

The floor will be composed of marble tiles, the walls plastered, and the interior painted in colors appropriate to the materials of which it is composed.

I propose to warm this portion of the building by means of hot-water pipes enclosed in chambers erected in the present furnace rooms in the cellars and connected with boilers for heating the water; the external air to be admitted into these chambers, where it will be warmed and conducted by flues to the Library and such of the adjacent rooms as are heated by the present furnaces.

The quality of the heat thus produced is not only unobjectionable, as regards health and comfort, but it is peculiarly adapted to the warming of libraries, as it retains its original moisture and is not injurious to the binding of the books, besides being free from dust and other impurities.

The execution of the entire plan here proposed will in no way impair the stability of the structure, but rather promote it; none of the main walls will be disturbed, the removal of the arches over the rooms will relieve the outer walls of horizontal pressure, and the aggregate weight of the superstructure will be reduced; all of which are important considerations when it is remembered that the western projection has always had a tendency to settle off from the rest of the building, which is shown by the cracks in the angles on the outside.

The injury to the building produced by the fire is almost exclusively confined to the Library.

The floor being composed of bricks laid on the arches of the rooms below, and the surrounding walls being of great thickness, extending above the roof in the form of parapets, the firemen were enabled to keep the fire under control and prevent it from communicating to other parts of the building.

The walls are, however, so much injured as to make it necessary to take down and rebuild the upper portion of them, including the entire parapets, and to repair them generally throughout.

The western front has sustained so much injury around the windows as to make it necessary to take out the stonework between the pilasters as high as the bottom of the upper panels and substitute it with new material; the panels and sculpture appear to be uninjured, and as far as I can now judge they may remain.

The inner portions of the columns have suffered very seriously. The injured parts may, however, be cut out and replaced by new stone without removing them, as the repairing will be obscured by repainting them.

I would further suggest in connection with these improvements the removal of the stairway leading into the attic in front of the main door of the Library. This stairway is of but little use, as both ends of the building have other convenient approaches.

I therefore propose its removal, with all the columns and archways connected with it. The stairway by which the Rotunda will be approached will then be better lighted, the approach to the Library will be free and light, and the Library door will be in full view from the Rotunda.

This door may be richly embellished with the columns and entablature which now support the stairs in question, and a rich marble balustrade may be placed around the stairways leading from below, which will form a tasteful and convenient improvement.

This colonnade, with the low arches leading to the Library, are the most objectionable features of the building, besides interfering with the passage of light to the stairway most used by the members, and also to the approach to the Library.

I can therefore see no reason why they should not be removed.

I have estimated the cost of carrying out that portion of the plan now proposed, embracing the space heretofore occupied by the Library, together with all the aforementioned repairs and alterations, the whole of which are to be executed of incombustible materials, as hereinbefore stated, and find that it will amount to $72,500.

I am, very respectfully, your obedient servant,

The Library of Congress Commemorative Silver Dollar Coin shows with an image of the ironwork in the library during reconstruction. 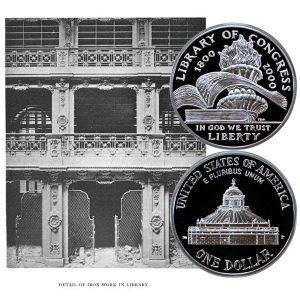 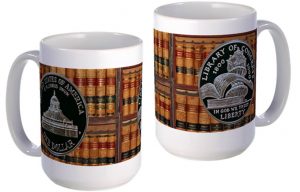