Today, the American Buffalo Gold Bullion Coin remembers when the farmers of the mid-west sent food to the Russian famine areas in 1892.

From the Midland Monthly Magazine of April 1894:

A Far-Reaching Charity. I.

By B. F. Tillinghast. Secretary Of The Iowa Russian Famine Relief Commission.

During the early months of the year 1892 five steam ships, loaded with grain, flour, provisions and hospital stores, departed from two eastern cities for Russian ports on the Baltic Sea.

This fleet of ships had no admiral, its course was shaped by no government, and the orders were unsealed and open to the world.

It is a common thing for merchant vessels to steam and sail with their cargoes of food-stuffs and merchandise from the United States almost to the ends of the earth.

It is not rare for the navies of nations to meet in review, as they met last May at Fortress Monroe and in New York harbor, in glorious celebration of the Columbian anniversary.

But I have read of no instance where millions of people, without official direction or support, subscribed money, gave of their abundance, sometimes from their very poverty, and chartered large ocean freighters; where carrying corporations and telegraph companies vied with the people in sending supplies and substantial cheer to other and unknown millions suffering and dying from wide-spread famine.

The times of departure were well ordered, although this happened by accident rather than by design, since there were four centers of movement, each quite independent of the others. These were in Iowa, Minnesota, Pennsylvania and New York.

The steamship Indiana, loaded at Philadelphia, got away first, on February 20th. The Missouri, carrying flour and corn-meal from the northwestern states, left New York March 15th; the Conemaugh of Philadelphia, with flour, followed April 23d; the Tynehead, with a cargo almost exclusively from Iowa, was the fourth, leaving New York May 2d ; and the Leo with stores of flour, largely due to the work of the Christian Herald and its editor, Dr. Talmage, was the fifth and last, on June 11th.

If there be added to the articles shown by the manifests of these vessels the various sums of money sent to Russia from America through the American legation at St. Petersburg and other channels, approximately $200,000, the value of the aggregate gifts delivered must exceed $1,000,000.

This munificent amount is, however, unimportant when compared with the more than generous spirit which made its realization possible.

This question has been asked, “Would the people of the United States have responded as liberally if the cry of distress had come from Germany, from France, from Spain, or from England?”

The answer must be qualified. In no one of these countries is it presumably possible for a famine to seriously affect from thirty to thirty-five million human beings, and these are the figures which investigators have given as within the actual extent.

It is something frightful; not easy of comprehension. If half the population of our states and territories were in dire want of bread, the ghastliness of the Russian famine of 189 1 and 1892 would come nearer home.

The impulse of Americans is to be thoughtful of others while never neglectful of the indigent who are always with us. I believe that the charities sent across the ocean in 1892 did not lessen by a single dollar the benevolences in this country.

Germany, France, Spain, England, or other nations, will always find friends and help in America when calamity comes to them so great that they are unable to bear it alone.

But it must be confessed that with many in the northern states the sentiment of gratitude to Russia quickened the promptings of pure charity. They could not forget the friendly offices of the Emperor Nicholas in 1838, when there was much excitement in the United States and strong feeling against Great Britain.

Nor could they be mindless of the fact that in the dark days of the civil war, when Louis Napoleon had invited Russia, as he had England, to unite with him in demanding the breaking of the blockade, the czar of Russia sent his men-of-war to New York and San Francisco.

These battle ships remained for months with sealed orders. Their mission became a record of history later when it was learned upon authority of Prince Gortschakoff that an order was written by Alexander’s own hand, directing his admiral to report to President Lincoln for orders in case England or France gave undisguised support to the confederates.

Of one thing there is certainty: no mercenary or even commercial consideration was thought of by any person who gave money, corn or other contribution to the famishing peasants of Russia.

The real inception of the work of relief I am unable to determine. It has never been considered of the least consequence except that the fruit cannot be plucked without the seed having first been planted.

Observant readers knew in the summer of 1891 the crops had failed over a large area of European Russia. They had learned of former partial failures making this later one more grave, and every account during the fall of that year intensified the situation.

The territory of the famine was so distant, the communication was so slow, the reports were so conflicting, that the horrible truth did not come out for months. One of the first to commend the sending of relief was Miss Frances E. Willard.

In her annual report as president of the Woman’s Christian Temperance Union, read in Boston, November 13th, Miss Willard presented her appeal for a Thanksgiving collection in the churches. She held that to succor the starving poor in Russia would be an act pleasing to God and helpful to the holy cause of human brotherhood.

Among other words of Miss Willard’s report were these: “The rich and great in Russia are enjoying the beatitude of unwonted self-denial that they may help their helpless brethren.”

Two hundred dollars was at that time raised by collection among the delegates to the convention. This sum was sent to Countess Tolstoi, at Toula. It was, so far as I have been able to learn, the first remittance made through public notice.

But about that time others were privately talking and thinking. Among them were some Iowa women and men of warm heart, bright mind, and quiet deed.

I chance to know of Miss Alice French, the “Octave Thanet ” of literature; Mrs. Nathaniel French, Rev. Arthur M. Judy, pastor of the Unitarian church ; Col. George W. French, and others of Davenport. W. C. Edgar, editor of the Northwestern Miller, Minneapolis, had suggested a ship-load of flour to be given by the millers of the northwest.

In its issue of December 6th, the Davenport Democrat urged that the relief work be broadened, systematized and hastened.

But how could the movement be organized and conducted to a satisfactory issue? There was the rub.

For, to paraphrase Hamlet, what doubts and difficulties might arise when the undertaking had been well begun? In the event that offerings should get to Russia, what then?

To accept the version George Kennan had insistently spread by newspaper, magazine, book and public address, Russian officials would confiscate the supplies, burn the ships that transported them, and send to Siberia any Americans with the temerity to go and proffer the food.

More seriously, would Russia accept, in the spirit in which they were tendered, the weighty evidences of good will? Would she assume their distribution and guarantee American commissioners, practically self-appointed, the required facilities for learning of her extremity, and permit them to send back uncolored accounts of all that they saw?

All this Russia did and far more. No nation could receive relief more gratefully, dispatch it to the impoverished districts with less delay, or extend official authority and means more unreservedly.

Fortunately this is not a matter of opinion but one of eye-witnesses and documentary proof.

When it came to deciding upon the agency through which Iowa’s gift, without loss on the one hand or increase of expense on the other, should reach the end in view, there was not one minute’s doubt.

The American National Red Cross was known, and its honored president, Miss Clara Barton, who has never failed to hear and to answer the appeals of stricken humanity in war, pestilence, fire, flood, and famine, was the one unquestioned recourse.

Miss Barton had informed herself of the suffering in the Russian provinces, and she had anticipated the outpouring of American relief.

With a woman’s tact, a diplomat’s art, and a benefactor’s forethought she had called upon Hon. James G. Blaine, then secretary of state, and also upon Mr. Alexander Gregor, Russian charge d’affaires, at Washington.

In brief, the way was not only opened, but paved. Russia would thankfully accept any relief tendered; and, more, she would send her ships to New York or charter American vessels to convey the gift to her own ports, from which the imperial railroads, boats, and other conveyances would carry it to the scenes of destitution.

That Russia should come to our shores like a mendicant was repulsive and not to be thought of. What others might do was for them to determine; but, as for the Red Cross and Iowa, they would deliver the relief they gave.

This was the nearest approach to governmental aid received at any time.

The Red Cross is an organization acting under the Geneva treaty, the provisions for which were made in the international convention at Geneva, Switzerland, August 22, 1864, and since signed by nearly all civilized nations, including the United States, which gave its adhesion by act of congress March 1, 1882.

Cooperating with this society the Iowa workers carried a shield which was a defense against any who might be misinformed or skeptically disposed.

The American Buffalo Gold Bullion Coin shows with an artist’s image of the American food being delivered to the Russian towns. 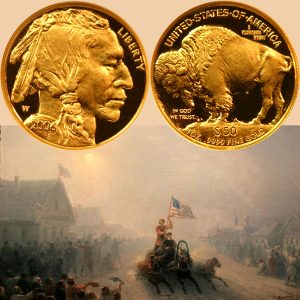