Today, the Louisiana State Quarter Coin remembers when the English at Fort Charlotte surrendered to the Spanish Governor of Louisiana on March 14, 1780.

From A History of Louisiana, Volume 2, by Alcée Fortier, published in 1904:

After the capture in 1779 of Baton Rouge, called by the English New Richmond, Galvez left New Orleans in January, 1780, to undertake the conquest of Mobile.

Galvez sailed from the Balize on February 5, 1780, with an army of two thousand men—regulars, militia, and a few companies of free men of color. In spite of a terrific storm, which greatly hampered and delayed him, he landed his army on the eastern point of Mobile River.

General Campbell, the English commander at Pensacola, might have destroyed the Spanish army had he attacked it with a large force in its disorganized condition.

Galvez understood this so well that he who was generally so bold thought of retreating to New Orleans by land.

Campbell, however, did not appear, and Galvez erected six batteries and began to cannonade Fort Charlotte, which was commanded by Captain Durnford.

The following correspondence is interesting in that it shows the chivalric character of Galvez, Durnford’s manliness, and Campbell’s indecision.

The first letter was written in French, and the others in English.

Sir: If I had fewer than two thousand men under my command, and if you had more than one hundred soldiers and a few sailors, I would not ask you to surrender, but the great inequality of forces compels us—you to yield immediately, or I to make you bear all the extremities of war if a useless and uncalled-for resistance irritates the patience of my troops, too much annoyed by some accidents. Today I am ready to grant you a regular capitulation and in accordance with circumstances; tomorrow perhaps nothing will be left to you but the sterile repentance of not having accepted my proposition in favor of the unfortunates who are under your command. I have the honor to be, Sir, Your very humble and very obedient servant, B. De Galvez   To Captain Durnford, Fort Charlotte, Mobile.

Sir: I have the honor to acknowledge the receipt of your Excellency’s summons to surrender immediately the Fort to your Excellency’s superior forces. The differences of number, I am convinced, are greatly in your favor, sir, but mine are much beyond your Excellency’s conception, and was I to give up this Fort on your demand I should be regarded as a traitor to my king and country. My love for both, and my own honor, direct my heart to refuse surrendering this Fort until I am under conviction that resistance is in vain. The generosity of your Excellency’s mind is well known to my brother officers and soldiers, and should it be my misfortune to be added to their number (sic), a heart full of generosity and valor will ever consider brave men fighting for their country as objects of esteem and not revenge. I have the honor to be, etc., Elias Durnford. To Gov. D. B. De Galvez.

Sir: Soon after I sent Land Express a flag was perceived in the wood, and I sent an officer to receive it at some distance. This, as I expected, was a summons to surrender to Don Bernardo de Galvez’ superior forces—a copy of which you have enclosed with my answer thereto. The Flag was brought in Person by an old acquaintance, Colonel Bolyny [Bouligny], who sent me a polite card, wishing for the pleasure of an interview if possible, and Profession of Friendship, although we were National enemies: on which I sent Mr. Barde to conduct him into the Fort with the customary ceremony, where he dined and continued until nearly five o’clock, drinking a cheerful Glass to the healths of our King and Friends.

During our conversation I found that the Report of the Shipwreck was true; he acknowledged that they had undergone great hardships, but would not allow to have lost any men, and informed me that they were about 2500 men, but by trusty Indians who were sent by me into the camp in the morning, I learned that a great number were negroes and mulattoes, and they had landed no cannon. Bolyny confirmed that we had cut the cable and just hit the Row Galley, but we are certain that three nine pounder shot hit her, and as she is gone off I suspect she is well mauled, for yesterday morning she was seen opposite the Choctaws on a heal (sic), and I suppose is gone to Dog River to repair the damage received from our shot. As soon as Colonel Bolyny left me I drew up my Garrison in the square, read to them Don Galvez’ summons, and told them that if any man among them was afraid to stand by me, that I should open the gate and he should freely pass. This had the desired effect, and not a man moved. I then read to them my answer to the summons, on which they all joined in three cheers and then went to our necessary work like good men.

I really believe that their (the enemy’s) force is greatly magnified. I am, Elias Durnford.

General Campbell: Your great good news hath just arrived. I thank you, dear Sir, for the consolation it affords me. I need not say that I will defend the Fort to the last extremity. The vessels I can see from this are in the mouth of the East Pass, about two miles distant from the Fort. And the Galvez Brig is one and Pickler’s Florida the other. Near to the Dog River are five ships or Pollacas, and I am informed that three or four are in Dog River, besides the Row Galley. I am, etc., Elias Durnford.

Gen. Campbell: Sir: It is my misfortune to inform you that this morning my small but brave garrison marched down the breach, and surrendered themselves prisoners of war to General Bernardo de Galvez’ superior arms. I write for your information, and request you will do me the favor to inform Mrs. Durnford that I am in good health, and that she ought to be under no uneasiness at my fate.

When it is in my power to send you the capitulation and state preceding it for a few days, will do it; in the meantime I assure you, sir, that no man in the garrison hath stained the luster of the British arms.

The number by return of killed, wounded and prisoners, 304.

I have the honor to be, etc., Elias Durnford.

Captain Durnford’s “great good news” was probably the fact that Campbell had announced to him that he had sent, on March 5, to relieve Mobile the Sixtieth Regiment, and the next day the remainder of the Waldeck Regiment.

Campbell himself set out from Pensacola with a force of five hundred and twenty-two men, but, as we have seen by Durnford’s letter quoted above, Fort Charlotte had capitulated on March 14, 1780.

Galvez granted his gallant opponent the honors of war, and agreed, says Mr. Hamilton, “ to take his prisoners to a British port and land them, upon their promise not to serve against Spain or her allies for eighteen months.”

It was at Fort Charlotte that Willing, who had so ruthlessly devastated the Mississippi coast from Baton Rouge to Natchez, had been kept a prisoner by the English until exchanged in 1779.

Galvez was made a major-general for his achievements at Mobile, and he resolved to drive the English entirely out of the country adjoining the province of Louisiana by making the conquest of Pensacola. 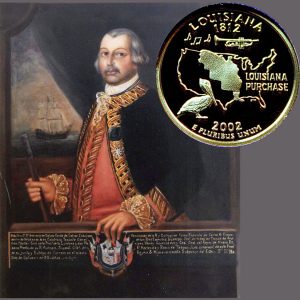