Today, the Morgan Silver Dollar Coin remembers the standardization of time in the United States and Canada in the early 1880s and the rule of Congress setting the time standard in Washington D.C. on March 13, 1884.

From Nature, A Weekly Illustrated Journal of Science, of January 22, 1885:

Universal Time and the Railways

One of the reasons why the Prime Meridian Conference met at Washington was that the United States possesses the greatest longitudinal extension of any country traversed by railway and telegraph lines, and it is quite in keeping with the spirit of American institutions that some of the most important measures necessary to carry out the resolutions of the Conference were taken by the railway men before the scientific men had begun their sittings.

The action of the railway companies began as far back as 1883. It was a regular rebellion against the inconvenience of having more than half a hundred standards of railway time from east to west of the continent.

At the Conference itself, Mr. W. F. Allen, one of the United States delegates, who has from the first taken the greatest interest in this special branch of the subject, brought the matter prominently before the Congress, stating what had been done.

Since the Conference met, the suggestions primarily due to the railway authorities have been accepted by the Army Signal Corps and other public bodies, and from the east of Canada to the Pacific the Continent is now divided into five sections, each with its time standard, differing by one hour from those to the east and west.

Thus we have Inter-colonial time, Eastern time, Central time, Mountain time, and Pacific time, representing differences of one hour or 15⁰ of longitude.

We append a map, and a paper by Mr. Allen, which we have received from an esteemed correspondent, which will show at once the history of this movement and what has come of it.

I. On November 18, 1883, the principal railway lines of the United States and Canada adopted a new method of computing and recording time, for the purpose of securing a uniform time standard which should simplify the business of transportation and add to the convenience of travelers. It is almost wholly for purposes of travel and transportation that the majority of people have need of accurate time, and everywhere except in very large cities, business has always been regulated by railroad time.

II. The defects of the old system of time standards were mainly as follows: —

(1.) There were formerly more than fifty standards of railway time in the United States. Now there are but four.

(2.) The old standards differed from each other, where they intersected, by all sorts of variations, errors, and odd minutes. Now the differences between the standards are an exact hour, and the minutes and seconds are the same in all four divisions.

(3.) Formerly there were almost innumerable places at which standards changed. Now the points of change are few in number, and always at prominent points of railway departure.

III. In the plan which has now been adopted it was proposed: —

(1.) That the same standard should govern as many railroads as possible.

(2.) That the standards should not extend over so large an area of territory as to cause standard time to differ at any point by more than about thirty minutes from local time (mean solar time).

(3.) That each standard should vary from the adjacent standards by the most readily-calculated difference, that of an even hour.

(4.) That changes from one standard to another should be made at well-known points of departure.

(6.) That the 75th meridian west from Greenwich being almost precisely the central meridian for the system of roads using standards based upon the time of eastern cities, and the 90th meridian being equally central for the roads running by the time of western cities, the time of those meridians should be adopted for the territory which includes nearly 90 percent of our whole railway system. The hour meridians east and west of those named (the 60thon the east, and the 105th and 120th on the west) were found to be equally well adapted as central meridians for the roads in the section of country adjacent thereto.

IV. The problem in this country presented a feature nowhere else encountered. Standard time was introduced throughout the island of Great Britain as long ago as the year 1848. When the railways demanded uniform time, and Greenwich time was adopted. France also has a uniform standard. But the continent of North America covers too many degrees of longitude to permit of the use of any one meridian as a single hour standard for all points between the two oceans. Under such a system there would be points where local time would differ from standard time by about two hours.

V. The new system divides the United States into four sections. At all places in the same section time is the same. The first section, which is governed by the time of the 75th meridian west from Greenwich, embraces all the territory between the Atlantic coast and Detroit, Pittsburgh, Wheeling, Parkersburg, Huntington, Bristol, Augusta, and Charlestown, as indicated on the accompanying map (see next page). This is called Eastern Time. At 12.0 mid-day on the 75th meridian every clock and time-ball, from Calais to Pittsburg and from Quebec to Charlestown, indicates the hour of noon.

The second section is governed by the time of the 90th meridian, called Central Time. it includes all the territory from the western limits of the eastern time (that is, from Detroit, Pittsburg, Augusta, &c.) to Bismark, North Platt, Dodge City, &c. Time in this section is one hour slower than eastern time.

The third section extends from the last-named places westward to Heron (Montana), Ogden (Utah), the Needles (Arizona), &c. Time in this section is that of the 105th meridian (one hour slower than central time), and is denominated Mountain Time.

VII. The adoption of a uniform standard of time by the railway lines has led to the abandonment of local time in nearly all the cities of the United States. The time of the 75th meridian was selected as the standard for the district of Columbia by Act of Congress, approved March 13, 1884.

It is encouraging to learn that, as was to have been expected, local time throughout the United States, as opposed to railway time, has already been abolished, and it is to be hoped, for the benefit of railway travelers on this side of the Atlantic, that the continent of Europe, from the extreme west of Spain to the Caspian, will soon be dealt with in the same manner.

The Morgan Silver Dollar Coin shows with an image of the map highlighting the meridians used for standardizing time. 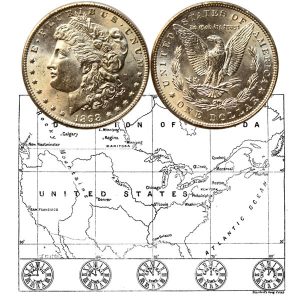