Today, the Vermont Classic Commemorative Silver Half Dollar Coin remembers when Governor Tryon put forth a proclamation for the arrest of Ethan Allen and his contemporaries on March 9, 1774.

The arrest warrant noted various unlawful acts supposedly performed by Allen and his cohorts, however people of his area had a different viewpoint of the situation.

Perhaps this was the beginning of the Green Mountain Boys…

The Documentary History of the State of New York, Volume 4, by the New York Secretary’s Office, Edmund Bailey O’Callaghan, published in 1851, provided the text of Governor Tyron’s Proclamation:

Proclamation for the Arrest of Ethan Allen and the Other Leaders of the Bennington Mob.

By His Excellency William Tryon Esquire Captaine General and Governor in Chief in and over the province of New York and the Territories depending thereon in America Chancellor and Vice Admiral of the same.

Whereas many acts of outrage cruelty and oppression have been committed against the Persons and properties of divers of his Majesty’s subjects inhabiting the County of Charlotte and the Northeastern District of the County of Albany, by certain Persons distinguished and known by the Name of the Bennington Mob; and upon complaint thereof made to the General Assembly of this province and a due consideration of the several Proofs and Depositions presented in support of the said Complaint, the General Assembly did on the fourth Day of February Instant come to the following Resolutions.

That there at present prevails in part of the County of Charlotte and in the Northeastern District of the County of Albany a dangerous and destructive spirit of Riot and Licentiousness subversive of all Order and good Government and that it is become an intolerable Grievance which requires immediate Redress.—

That many atrocious Acts of Outrage, Cruelty and oppression have been there perpetrated by a number of lawless Persons calling themselves the Bennington Mob, who have seized insulted and terrified several of the Magistrates and other Civil officers, so that they dare not execute their respective Functions; rescued Prisoners for Debt; assumed to themselves Military commands and judicial powers; burned and demolished the Houses and Property, and beat and abused the Persons of many of his Majesty’s subjects, expelled them from their Possessions; and put a period to the Administration of Justice; and spread Terror and Destruction throughout that part of the Country which is exposed to their oppression.

And did further Resolve That it appears that Ethan Allen, Seth Warner, Remember Baker, Robert Cochran, Peleg ,Sunderland, Sylvanus Brown, James Brakinridge and John Smith are principal Ringleaders of and Actors in the Riots and Disturbances aforesaid.

And thereupon the said General Assembly have presented an Address to me to issue a proclamation offering a Reward of one hundred Pounds for apprehending each of them the said Ethan Allen and Remember Baker, and the sum of Fifty Pounds for apprehending and securing any or either of the other persons above named in his Majesty’s Goal in Albany; and commanding the Magistrates and other Civil Officers of the County of Albany and Charlotte to be active and vigilant in suppressing the said Riots and preserving the public Peace and good Order as well as for bringing to Justice the perpetrators and Authors of the said Riots.

I have therefore thought fit with the advice of his Majesty’s Council to issue this Proclamation hereby strictly enjoining and commanding all Magistrates Justices of the Peace Sheriffs and other Civil Officers of the Counties of Albany and Charlotte to apprehend and take the before named Ethan Allen late of Bennington in the County of Albany yeoman; Seth Warner late of the same place yeoman; Remember Baker late of Arlington in the said county yeoman; Robert Cochren late of Rupert in the County of Charlotte yeoman; Peleg Sunderland late of Socialborough in the said County yeoman; Silvanus Brown late of the same place yeoman; James Brakenridge late of Wallumschaick in the County of Albany yeoman; and John Smith late of Socialborough in the said County of Charlotte yeoman and them and every of them to commit to safe and secure custody in the Gaol of the city & county of Albany to answer for their several offences and to be dealt with according to Law.

And I do hereby in his Majesty’s Name promise the several Rewards aforesaid that is to say the sum of one hundred pounds for apprehending each of them the said Ethan Allen and Remember Baker, and the sum of fifty pounds for apprehending each and every of them the said Seth Warner, Robert Cochran, Peleg Sunderland, Silvanus Brown, James Brakinridge and John Smith to be paid to the Person or Persons who shall take and secure the said offenders that they may be proceeded against as the Law directs.

And all magistrates and other civil officers of the Counties of Albany and Charlotte, are hereby required to be active and vigilant in preserving the public Peace, and suppressing all future Riots and Disorders of the like dangerous Tendency.

Given under my Hand and Seal at Arms in the City of New York the ninth Day of March 1774 in the fourteenth year of the Reign of our Sovereign Lord George the third by the Grace of God of Great Britain, France and Ireland, King Defender of the Faith and so forth.

God Save the King.

But, the people of the area called the New Hampshire Grants met to develop a rebuttal to the actions of New York.

Vermont, the Green Mountain State, by Walter Hill Crockett, published in 1921, included a description of the response:

It was recommended, therefore, that a proclamation be issued offering a reward for the apprehension of the ringleaders of the mob.

This report being accepted by the Legislature, Governor Tryon, on March 9, 1774, offered rewards of one hundred pounds each for the arrest of Ethan Allen and Remember Baker, and fifty pounds each for apprehending Seth Warner, Robert Cochran, Peleg Sunderland, Silvanus Brown, James Breakenridge, and John Smith.

When the news of the action of the New York authorities reached the Grants, a meeting of the committees of the towns west of the Green Mountains was held on March 1, 1774, at the residence of Eliakim Wellers, at Manchester, and was adjourned to the third Wednesday of March at the house of Capt. Jehiel Hawley, in Arlington.

A committee of seven was appointed to prepare resolutions in answer to the action of New York. Having prepared a report, it was signed by Nathan Clark, chairman, and Jones Fay, clerk, and it was published in the Connecticut Courant at Hartford, and in the New Hampshire Gazette at Portsmouth.

The resolutions called attention to the fact that all the troubles and difficulties of the settlements had been due to “an unequal and biased administration of law.”

Objection was made to permitting the New York officials to set themselves up as “great sticklers for good order and government,” when they did not hesitate to violate the orders of the King, and some of them had acted as judges in cases in which they were personally interested.

Declaring their loyalty to the King, whom they recognized as their “political father,” they expressed their reliance upon him for the protection of the property; and, having purchased their property in good faith, they announced their determination to maintain these grants “against all opposition” until His Majesty’s pleasure should be known.

They declared that their only resistance to government was “the law of self preservation, which the law of God and nature enjoins on every intelligent, wise and understanding being.”

It was asserted that attempts to indict their friends and neighbors as rioters were “contrary to the good and righteous laws of Great Britain.”

Therefore, it was resolved by the convention:

“That as a country we will stand by and defend our friends and neighbors so indicted at the expense of our lives and fortunes. * * * That for the future every necessary preparation be made, and that our inhabitants hold themselves in readiness at a minute’s warning to aid and defend such friends of ours, who, for their merit to the great and general cause are falsely denominated rioters; but that we will not act anything more or less than on the defensive and always encourage due execution of law in civil cases, and also in criminal prosecutions that are so indeed.”

The Vermont Classic Commemorative Silver Half Dollar Coin shows with an image of a New York map, circa 1776, compiled from surveys ordered by Governor Tryon. 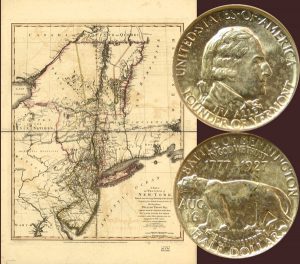 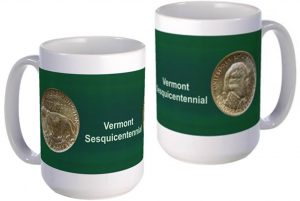