Today, the Bicentennial Quarter Coin remembers when Cornwallis arrived in Hillsborough, North Carolina and issued an invitation to join his troops on February 21, 1781

From the Scots Magazine, Volume 44, published in 1782, an excerpt of an article titled “Mr. Monro’s answer to An Officer:”

On Feb. 20. 1781, Lord Cornwallis arrived in Hillsborough, in North Carolina, with the troops under his command. His Lordship being informed who I was, accosted me in the street.

After congratulating his Lordship on the event of driving the rebel forces, under Green, out of the province into Virginia, and expressing the joy I felt on seeing at last the British forces advanced so far into the country, his Lordship told me, that, I might inform my friends that they should have every assistance from him that was possible, as he always understood there was a great number of loyal subjects in North Carolina, and particularly in the neighborhood of Hillsborough.

I told his Lordship, that there was a great many waiting with impatience for such an opportunity as then offered to confirm their loyalty; that a great number of the militia were then ready to turn out, and to give his Lordship every assistance in their power to enable him as soon as possible to put a speedy end to the rebellion, and re-establish the British government.

He said that it was very well; and then, changing the subject, added, that he trusted more to the goodness and bravery of his troops than to their present numbers; but that he expected to be joined in a short time by three thousand regulars from home, who were to be landed at Wilmington.

Immediately after this conversation with his Lordship, Col. Hamilton, of the North-Carolina loyalists (a gentle man with whom I have been on the most friendly and intimate terms for many years, and who had fought almost in every action to the southward, since the British troops first landed at Savannah), came up to me, and told me, that he had reserved the majority of his regiment for me, and begged that I would use my influence with the young men of the country to enlist in his corps.

I answered, that he might be assured I would procure him all the men I possibly could; but that I could not promise to accept of the majority, as I had been long since engaged to act with the loyal militia as soon as the British troops made their appearance in our part of the country.

He said, I might act with the militia as long as it was necessary; but that he had long depended on me to join my interest to him ; that he hoped to obtain a warrant to raise a second battalion.

In that case I should command it.

As I always found him to be a man of honor, and of the first interest and influence in North Carolina, as well as in Virginia, I did not hesitate a moment to tell him, that I was ready and willing to join him in any plan that was thought best and most proper to put a speedy end to the rebellion.

Next day, when the people were crowding in from different quarters, I spoke to my friends to advise all the young men they could to enlist in Col. Hamilton’s corps.

The day following I procured for him thirty-five hearty young fellows; and in the course of three days, I engaged upwards of sixty, all good riflemen.

This fact, which will be cheerfully attested by Col. Hamilton, I imagine will sufficiently prove that the assertion of “An Officer,” respecting my capacity and influence in raising men, is at least a gross mistake.

I was put in general orders immediately to communicate with the people, and authorized to grant passes to the inhabitants.

The people flocked into town from different quarters. I was directed to take the paroles of all that came in, without distinguishing the loyalist from the rebel, by an order I received from Lieut. Haldane, one of his Lordship’s aid-de-camps.

The loyalists, or those who never countenanced the rebellion, were highly offended at it, and would not sign that parole.

I thought it exceedingly improper, because greatly disgusting to them. They could not brook being treated in all respects as rebels, and deemed “prisoners of war,” when they had been uniformly loyal, and were ready to die in the cause of their sovereign.

I therefore omitted to take their paroles.

On the 21st I received a number of proclamations, inviting the people to repair to the royal standard at Hillsborough, with their arms and ten days provisions, and promising them the most friendly reception.**

These I distributed over the country as quick as possible. Early in the morning of the 22d, I was sent for by Gov. Martin. He told me, that he had mentioned me to his Lordship as a proper person to raise a provincial corps; and that his Lordship, from what he understood of my character, had no objection to honor me with a commission, as Lieutenant-Colonel Commandant.

I thanked his Excellency, and told him that I was long since engaged to act with the militia, and that it would give them the highest offence was I to desert them ; besides, I was already engaged to Col. Hamilton, to get all the recruits I could for him, and that he had reserved the majority of his regiment for me, if I would accept of it, and, therefore, that I was bound by honor as well as inclination, not to interfere with him in the recruiting-service.

He spoke with respect of Col. Hamilton; but said, that he had as many men already as he had a right to command; and will not do or say, or cause to be done or said, anything to the prejudice of his Majesty’s government, that we will remain peaceably at our homes, and that we will surrender ourselves to any of his Majesty’s officers when required.

Whereas it pleased the Divine Providence to prosper the operations of his Majesty’s arms, in driving the rebel-army out of this province, and whereas it is his Majesty’s most gracious wish to rescue his faithful and loyal subjects from the cruel tyranny under which they have groaned for several years, I have thought proper to issue this proclamation, to invite all such faithful and loyal subjects, to repair without loss of time, with their arms and, ten days provisions, to the royal standard, now erected at Hillsborough, where they will meet with the most friendly reception; and I do hereby assure them, that I am ready to concur with them in effectual measures for suppressing the remains of rebellion in this province, and for the re establishment of good order and constitutional government.

Given under my hand, at Head-Quarters, at , Hillsborough, this 20th day of February, A.D 1781, and in the 21st year of his Majesty’s reign

The Bicentennial Quarter Coin shows with an image of Lord Cornwallis. 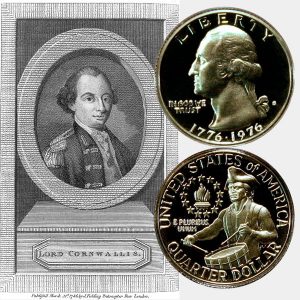