Today, the Texas Centennial Commemorative Silver Half Dollar Coin remembers when the president of the Republic of Texas handed the reins of government to the new governor of the state on February 19, 1846.

From A Twentieth Century History of Southwest Texas, Volume I, published in 1907:

Texas as a Republic.

The Republic of Texas existed as a unit in the family of nations for nearly ten years, or from the declaration of independence on March 2, 1836, until on February 19, 1846, President Jones surrendered the executive authority into the hands of the newly elected governor of the state.

During this decade in which the Lone Star shone out alone and apart in the national constellation the history of the republic diverges from its former continuity of narrative, and in the great composite of details becomes descriptive of the conditions of the period.

Therefore it is necessary at this point to select the important phases in the career of the Texas republic and to treat them topically without strict regard for their interdependent development or chronological order.

In exercise of the powers conferred by the constitution, there was held in September, 1836, an election for the offices of president, vice president, and senators and representatives to congress.

There were three candidates for the presidency, Stephen Austin, Sam Houston, and the late governor Henry Smith.

Houston’s exaltation in the minds of the people after his successful campaign is shown by the fact that he was chosen by a large majority over the father of Texas, Stephen Austin, whose noble and consistent patriotism was for the time dimmed by the military glory of the former.

Houston’s large-mindedness and his conciliatory temper were manifested in his appointment of Austin to the office of secretary of state and Smith to that of secretary of war, thus doing what was in his power to harmonize the factions which were influences potent for harm to the infant republic.

By provision of the constitution Houston was not to enter his office until the following December, while congress was summoned to assemble in October, but by mutual willingness the president and vice president of the provisional government retired from office on October 22, and on the same day Houston was inducted into office, the irregularity being sanctioned by congress.

At the same time with the election of the new government, the people gave unanimous ratification to the constitution as it stood, also practically the total vote in favor of annexation to the United States.

As the annexation movement deserves a special chapter, only a few facts concerning its development will be mentioned in this chapter.

The new government was confronted with many perplexities and knotty problems to unravel before Texas could take her place among the nations and attain the highest degree of welfare and development within.

The messages to congress of the retiring and the entering presidents recite many facts concerning the status of the republic after the achieving of independence.

The army and navy were objects of prime importance to maintain a national existence.

The citizen army naturally dissolved after the invasion was repelled, and had it not been for the many American volunteers coming into the country a military organization would have been impossible, and as it was there was not means to equip and maintain this soldiery.

The navy was a matter of much solicitude on the part of the infant republic, and for two years there was, practically no navy, after which a few vessels were maintained which were finally consolidated with the navy of the United States.

One of the first acts of congress was to issue bonds, with the public domain as security, and commissioners were sent abroad to negotiate them to the amount of two million dollars.

The public land question was one of the most important which came up before the various changes of administration, and policies both wise and unwise were from time to time adopted until the matter was systematized.

The first congress of the Republic had many tasks, and it was some time before the new machinery moved harmoniously.

A national seal and a standard were also adopted.

The former was much like the present state seal in general design, while the first flag was an azure ground upon the center of which was a golden star.

This was later changed to a tricolor, with a blue vertical field next to the staff on which was the Lone Star, and two horizontal stripes, the white above the red.

The boundary between Mexico and Texas as claimed by this first congress was declared to extend from the mouth of the Rio Grande to its source, thus including a large part of what is now New Mexico.

The first session of congress, which was held at Columbia, lasted about two months, and its work was in the main harmonious and beneficial to the republic.

The Texas Centennial Commemorative Silver Half Dollar Coin shows with an image of a statue of the last president of the Republic of Texas. 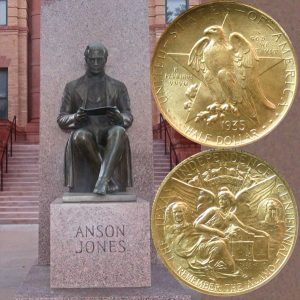