The expedition of which Printz was made the commander consisted of the ships “Fama” (“Fame” or “Renown ”) and “Svanen” (“Stork”).

They left Stockholm August 16, 1642, and Gottenburg November 1st, arriving at Christina February 15, 1643, the time from the first named place just five months, or one hundred and fifty days, though the voyage proper from Gottenburg occupied but three months and a half.

The Rev. John Campanius, who accompanied the expedition, has given an account of it in the work edited by his grandson.

They took the usual circuitous southern course, sailing by the coasts of Portugal and Barbary, and the Canary Islands, stopping during the Christmas holidays at Antigua, where they were entertained by the Governor and resuming their voyage by way of St. Christopher, St. Martin’s and other West India Islands, and thence eastward along the American coast.

They were inside the Delaware Bay, off the Hoornkill on the 26th of January, and on the following day encountered a severe storm, accompanied by a blinding snow, in which the “Fame” was roughly handled, losing three anchors, a main mast, and spritsail, suffering other damages, and finally running aground, and being run off with great difficulty.

Printz and his fellow voyagers disembarked at Christina, but he did not long remain there, and it is probable that but few of his men did.

The Governor made his home, and built a fort—at Tinicum, above Chester—higher up the river, as will be shown hereafter, and it is probable that he took with him most of the people he had brought over.

Of these colonists who came to the Delaware with Printz in the fourth Swedish expedition there exists no complete list, but some of their names have been preserved.

The most prominent character of all, not even excepting the Governor, was the clergyman John Campanius, made famous by the journals which he kept, pertaining to New Sweden, from which his grandson wrote the celebrated “Description of the Province of New Sweden,” a highly interesting, but in some respects untrustworthy work, and notable, too, as the finest translator of Luther’s catechism into the Indian language.

His name often appears as John Campanius Holm, the last word being added to designate Stockholm, the place of his nativity.

The Governor brought with him his wife and daughter Armgott, and Lieutenant Måns Kling returned to the settlement.

Among those who were destined to become prominent among this last party, were Joran Kyn Snøhvit and Elias Gyllengren.  Nearly all of those whose names have been preserved, came out as soldiers.

With the arrival of the fourth expedition and the settlement of its people, the Swedish colonies in America may be considered as fairly established, and the schemes first advocated by Gustavus Adolphus, were at last sufficiently advanced to afford a tangible promise of the rich fruition which that monarch, together with William Usselinx, Minuit and others, had fondly hoped.

Printz wrote, “It is a remarkably fine land, with all excellent qualities a man can possibly desire on earth,” and yet the outcome was far from being what this auspicious beginning would augur.

The growth of the settlement, as a matter of fact, was feeble and tardy, a condition of things which is to be accounted for principally by the fact that the Swedish government did not appreciate the importance of the colonization project and was remiss in extending financial and other aid, when the struggling colony stood in sore need.

During the first year of Governor Printz’s administration many of the settlers died, which Printz stated in his report, was due to hard work and the scarcity of proper food.

Immigrants continued to arrive, and they appear to have been constituted of the same classes as in the beginning.

Campanius says: “The generality of the people who went or were sent over from Sweden to America, were of two kinds. The principal of them consisted of the company’s servants, who were employed by them in various capacities; the others were those who went over to that country to better their fortunes; they enjoyed several privileges; they were at liberty to build and settle themselves where they thought proper, and to return home when they pleased. By way of distinction, they were called freemen. There was a third class, consisting of vagabonds and malefactors; these were to remain in slavery, and were employed in digging the earth, throwing up trenches, and erecting walls and other fortifications. The others had no intercourse with them, but a particular spot was appointed for them to reside upon.

“In the beginning of Governor Printz’s administration, there came a great number of those criminals, who were sent over from Sweden. When the European inhabitants perceived it, they would not suffer them to set their foot on shore, but they were all obliged to return, so that a great many of them perished on the voyage. It was after this forbidden, under a penalty, to send any more criminals to America, lest Almighty God should let his vengeance fall on the ships, and goods, and the virtuous people that were on board; it was said that there was no scarcity of good and honest people to settle that country; but such a great number of them had gone thither (as engineer Lindstrona says), that on his departure from hence, more than a hundred families of good and honest men, with their wives and children, were obliged to remain behind, as the ship had taken as many on board as she could hold, and yet these honest people had sold all their property, and converted it into money, not imagining that they could be so disappointed.”

This statement of Campanius (like many others of his) is not to be relied upon as a whole.

Printz’s report (1647) shows that criminals were received up to that time, and yet, they must have formed but a small portion of the community, for the whole number of colonists, in 1647, was only one hundred and eighty-three souls (and many of them have already been shown to have been “freemen,” or otherwise indicated as people of respectable character).

The report alluded to says, that of the total number, “twenty-eight of the freemen had made settlements,” and that a part of them were provided “with oxen and cows.”

Printz’s ideas of tact and diplomacy resembled an elephant dancing. He was a bluff, coarse soldier, well described by the shrewd, observant, caustic Pietersen De Vries, as “Captain Printz, who weighed four hundred pounds, and took three drinks at every meal.”

He lacked not in energy or decision of character. His alertness and aggressiveness made him a useful man in his time and place, and probably his administration was more valuable, to the colony at large, than would have been that of a really abler man, coupling with higher qualities than his greater weaknesses.

The Governor had not been long in New Sweden —and it will be remembered he landed at Christina, February 15th, 1643–before he selected a home and the seat of government.

To do this he went beyond the settlement already established, and beyond the present boundaries of the State of Delaware, to the island of Tinicum (now also the township of Tinicum, Delaware County, Pennsylvania) about two miles from the eastern limits of the city of Chester, then called by the Indians Tenacong, Tenicko or Tutaeaenung, “the convenient situation of which suggested its selection.”

Here he built a fort or block-house, of which Andreas Hudde afterwards said,—“it is a pretty strong fort, constructed by laying very heavy hemlock (gnenen) logs, the one on the other;” a mansion for his residence—“very handsome” and a church, which preacher Campanius consecrated to Divine use on the 4th of September, 1646.”

Around the residence, which was called “Printz Hall,”” orchards and gardens were laid out, and the ground was otherwise beautified.

The fort, which was named “New Gottenburg.” (“Nya Gothborg”), had a “considerable armament.”

“On this island,” says Campanius, “the principal inhabitants had their dwellings and plantations,” and it is evident that it became the locality of chief importance in, and practically, the capital of New Sweden.

The Delaware Tercentenary Commemorative Silver Half Dollar Coin shows with a map of the Delaware Bay, circa 1639. 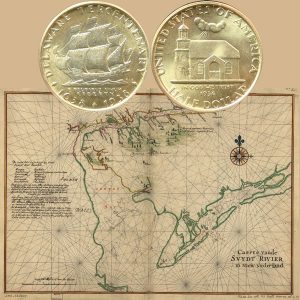