Just days earlier, Premier Clemenceau of France order the arrest of former Premier Caillaux on the charge of treason.

The release of the secret code correspondence  between Count von Bernstorff and the Berlin Foreign Office provided more clues to the involvement of Caillaux.

From its mysterious stock of intercepted diplomatic communications the State Department today published correspondence between Count von Bernstorff, former German ambassador here and the Berlin Foreign office showing that Former Premier Caillaux of France was in communication with German agents in Argentina in 1915.

The first Bernstorff dispatch contained very damaging references to Caillaux’s references to the French government and warned German newspapers against praising him. Another gave notice of the ship on which Caillaux was sailing from Argentina and planned its capture by submarines.

The capture of the ship was sought because her captain carried important papers. The German government was asked to treat Caillaux with every courtesy and consideration if the ship was taken.

Following is the text of the message sent by Bernstorff.

“Buenos Aires telegraphed the following Caillaux has left Buenos Aires after a short stay and is going direct to France evidently on account of the (group indecipherable) scandal which he regards as a personal attack upon himself.

“He speaks contemptuously of the president and the rest of the French government with the exception of Briand. He sees thru the policy of England perfectly.

“He does not anticipate the complete overthrow of France. He sees in the war now a struggle for existence on the part of England. Although he spoke much of the ‘indiscretions and clumsy policy’ of the Wilhelmstrasse and professed to believe in German atrocities, he has in essentials hardly changed his political orientation.

“Caillaux welcomed indirect courtesies from me, but emphasized the extreme caution which he is obliged to show, as the French government, he said, had him watched even here.

“He warns us against the excessive bestowed upon him by our papers, especially the Neue Freie Presse and desired on the other hand that the Mediterranean and Morocco agreements should be adversely criticized.

“Our praise injures his position in France. Caillaux’s reception here was cool. His report about Brazil had nothing new. On his return to France he will begin to reside in his own constituency. He fears Paris and the fate of Jaures.”

Another message which Count Bernstorff had forwarded was from Havana as follows:

“Caillaux is on board. In case of capture Caillaux should in an unobtrusive way be treated with courtesy and consideration. Can you inform our cruisers?”

The instruction of the German censorship to the German press on June 16, 1915 follow:

“For political reasons, it is urgently requested that nothing be written about the former French prime minister Caillaux and that his name be not mentioned under any circumstances.”

This correspondence, although no official announcement to that effect is available, is make public by arrangement with the French government which desired its exposure.

Caillaux now is waiting trial in France for treason on revelations developed by the celebrated Bolo Pasha case.

Louis Loustalot, member of the French chamber of deputies from Lande, whose immunity recently was suspended in connection with the Caillaux case was arrested this morning.

Paul Comby was arrested tonight in connection with the government’s investigation of the activities of Former Premier Caillaux. He is a lawyer and was one of the guests of M. Caillaux at a luncheon given to Signor Cavallinie, an Italian. He is said to have accompanied Deputy Loustalot, whose immunity has been suspended in inconnection with the Caillaux affair, to Switzerland, to see Abbas Hilmi, the former khedive of Egypt.

General Dubail, the prosecutor of M. Caillaux, signed an order for the prosecution of Comby on Dec. 24, and on the same day Comby was examined by Captain Bouchardon, in charge of the investigation. Cavallinie is alleged to have been connected with Bolo Pasha. He was arrested in Italy on Nov. 21. The charges against Deputy Loustalot are similar to those against Caillaux and the immunity of the two was suspended at the same time by the chamber of deputies.

The chamber of deputies sustained the government’s action in the Caillaux case late yesterday by a majority of 274 out of the 484 members present. The vote was taken after the government had been interpellated by Ernest Lafont, a socialist deputy, who held that the opening of Caillaux’s safe deposit box in Italy in the absence of a representative of the accused was illegal.

Premier Clemenceau was called upon by the socialists to reply. Edouard Ignae, under-secretary for military justice, however, answered for the government, saying that the case was in the hands of the Department of Justice and was following the usual course.

After repeated calls, Premier Clemenceau rose from the government bench and said it was the Italian government which had presided at the search of the safe in the Florence bank, and France was obliged to suppose that all legal forms had been observed.

Kept imprisoned after his arrest, the French High Court of the Senate finally tried Caillaux for high treason after a long delay. They sentenced Caillaux to three years’ imprisonment, the term he had already served, forbade him to reside in French territory for five years and deprived him of civil rights for ten years.

In the 1920s, Caillaux returned to serve in various government offices.

The Walking Liberty Silver Half Dollar Coin shows with an image of M. Caillaux, circa 1920s. 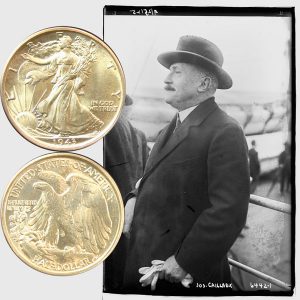