Today, the Constitution Commemorative Gold Five-Dollar Coin remembers when Vermont became the 14th “state” to ratify the new federal constitution, though it would be March before they became a state in the new Union.

In Vermont, Records of the Governor and Council of the State of Vermont, Volume III, edited by E. P. Walton, published in 1875, the proceedings and results of the convention of the federal constitution:

Act and Resolutions of the Convention, transmitted to the General Assembly of Vermont, and the President of the United States.

In full faith and assurance that the same will stand approved and ratified by Congress;

This Convention, having impartially deliberated upon the Constitution of the United States of America, as now established, submitted to us by an Act of the General Assembly of the State Vermont passed October the twenty seventh one thousand seven hundred and ninety,

Do, in virtue of the power and authority to us given, for that purpose, fully and entirely approve of, assent to, and ratify the said Constitution;

And declare that, immediately from, and after, this State shall be admitted by the Congress into the Union, and to a full participation of the benefits of the government now enjoyed by the States in the Union, the same shall be binding on us and the people of the State of Vermont forever.

Done at Bennington, in the County of Bennington, the tenth day of January, in the 15th year of the Independence of the United States of America, one thousand seven hundred and ninety one.

Resolved that it be recommended by this Convention to the Legislature at their adjourned session in January instant to take effectual measures in the proposed negotiation with the Congress of the United States of America for the admission of this State into the Confederated government that the act of the Commissioners of the State of New York for removing obstacles &c. done at New York on the 7th day of October- in the 15th- year of the Independence of the United States of America A. D. 1790— and the act of this State in consequence thereof— also an act of this State entitled an act for quieting [settling] disputes concerning landed property be in no wise impeached but that the same be and remain in full force to all intents & purposes for which they were enacted & made.

Be it further recommended that the legislature so modify the several laws commonly called tender acts as shall be least obnoxious to the constitution of the United States & least prejudicial to the citizens of this & the United States, where contracts are subject to the operation of these Laws.

Be it further recommended that as soon as this State shall be received into the Union the Legislature do take the most effectual measures to procure an equitable adjustment of the expenditures of this State during the late War between Great Britain & the United States.

The adoption of the constitution of the United States by Vermont was an occasion of joy in the nation, and specially in New York and Vermont, the States which had been so long contending.

The Vermont Gazette of Jan. 24, 1791 contained the following:

XIVth Pillar of Our Free and Happy Federal Government.

Yesterday morning, the pleasing intelligence of our sister state, Vermont, having adopted the American constitution, by a state convention, was received by a gentleman of character from that quarter — and at one o’clock, the independent company of artillery paraded, in uniform, and fired a federal salute of 14 guns from Forthill, which was followed by three cheerful huzzas, from a number of our most respectable citizens.

This agreeable event, which closes the circle of our federal union, cannot fail of being received with the utmost satisfaction by all Americans, of every description, who are friends to order, unanimity, and good government, and to the true welfare of our happy country.

The Constitution Commemorative Gold Five-Dollar Coin shows with an image of Thomas Chittenden, President of the Convention and the first governor of the state of Vermont. 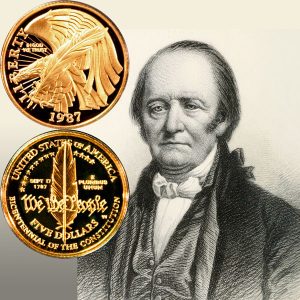