Today, the Montana State Quarter Coin remembers when the president’s signature added Montana as a new state to the Union on November 8, 1889.

From The Province and the States: Minnesota, Montana, North Dakota, South Dakota by Weston Arthur Goodspeed, Editor-in-Chief, published in 1904:

The State of Montana

At seven minutes past eleven o’clock, on the morning of November 8, 1889, the operator in the office of the Western Union Telegraph Company at Helena, took from the wires this message:

“The President signed and issued the proclamation declaring Montana a state in the Union at ten o’clock and forty minutes this morning.

No time was lost in conveying the glad tidings to the governor, and in a little while the intelligence spread to all the centers of population in the State.

There was something invigorating in the way men grasped each other by the hand upon receipt of the news, and rejoiced together in their new born citizenship.

More than twenty-five years had passed since congress granted a territorial form of government to a few thousand hardy miners in the gulches of the Rocky mountains, living in log cabins or “waki-ups,” and nearly five hundred miles from the nearest court house, church, school house or printing press.

But during that twenty-five years, a wonderful transformation had taken place.

When the Territory was first established, the Salt Lake trail and the Mullan road were the only highways.

At the time of its admission into the Union, Montana had 1,785 miles of railroad in operation, and 1,150 more under construction or in prospect.

The stage coach had given way to the Pullman car, and the log cabin had been supplanted by the modern residence.

In the last year of its territorial existence, Montana exported products valued at forty-five million seven hundred and fifty thousand dollars, of which twenty-four million dollars was gold and silver.

From a few hundred miners in 1864, the population had grown to one hundred thirty thousand in 1889.

The lawlessness and rowdyism of the early days were gone; the recollection of the vigilance committee was like the memory of some unpleasant dream, for no state brought into the Union, when first admitted, a larger percentage of law abiding, order-loving citizens than Montana.

Montana came into the sisterhood of American states without a dollar of bonded indebtedness and with a cash balance in the treasury.

Congress made liberal appropriations from the public domain for the establishment and maintenance of educational, penal and charitable institutions, and public buildings.

Thus she started upon her statehood well endowed, and well has she used the endowment.

President Harrison’s Proclamation 293 — Admission of Montana into the Union:

Whereas the Congress of the United States did by an act approved on the 22d day of February, 1889, provide that the inhabitants of the Territory of Montana might upon the conditions prescribed in said act become the State of Montana; and

Whereas it was provided by said act that delegates elected as therein provided to a constitutional convention in the Territory of Montana should meet at the seat of government of said Territory, and that after they had met and organized they should declare on behalf of the people of Montana that they adopt the Constitution of the United States, whereupon the said convention should be authorized to form a State government for the proposed State of Montana; and

Whereas it was provided by said act that the constitution so adopted should be republican in form and make no distinction in civil or political rights on account of race or color, except as to Indians not taxed, and not be repugnant to the Constitution of the United States and the principles of the Declaration of Independence, and that the convention should, by an ordinance irrevocable without the consent of the United States and the people of said State, make certain provisions prescribed in said act; and

Whereas it was provided by said act that the constitution thus formed for the people of Montana should, by an ordinance of the convention forming the same, be submitted to the people of Montana at an election to be held therein on the 1st Tuesday in October, 1889, for ratification or rejection by the qualified voters of said proposed State, and that the returns of said election should be made to the secretary of said Territory, who, with the governor and chief justice thereof, or any two of them, should canvass the same, and if a majority of the legal votes cast should be for the constitution the governor should certify the result to the President of the United States, together with a statement of the votes cast thereon and upon separate articles or propositions, and a copy of said constitution, articles, propositions, and ordinances; and

Whereas it has been certified to me by the governor of said Territory that within the time prescribed by said act of Congress a constitution for the proposed State of Montana has been adopted, and that the same, together with two ordinances connected therewith, has been ratified by a majority of the qualified voters of said proposed State in accordance with the conditions prescribed in said act; and

Whereas a duly authenticated copy of said constitution and ordinances, as required by said act, has been received by me:

Now, therefore, I, Benjamin Harrison, President of the United States of America, do, in accordance with the provisions of the act of Congress aforesaid, declare and proclaim the fact that the conditions imposed by Congress on the State of Montana to entitle that State to admission to the Union have been ratified and accepted and that the admission of the said State into the Union is now complete.

In testimony whereof I have hereunto set my hand and caused the seal of the United States to be affixed.

Done at the city of Washington, this 8th day of November, A.D. 1889, and of the Independence of the United States of America the one hundred and fourteenth.

The Montana State Quarter Coin shows with an image of the state capitol building, circa 1896. 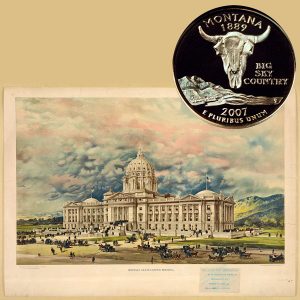