Today, the British Two-Pound Coin remembers an article in an American newspaper 222 years ago that was a reprint of a British handbill.

Britain remained at war in several countries after the American revolution.

The specific origin of this handbill was not noted in the article, however British Parliament included this content  referenced as the “seduction of the soldiery” in their parliamentary history published in 1799.

[The following is a copy of the handbill which has been distributed amongst the British soldiery, and which is mentioned in our last.]

We the people of Great Britain, your friends, your countrymen, your fellow creatures, desire you for one minute to lay aside the bayonet and musket, and behave like men. —Sheathe the sword of murder! Cease to be the assassins of you kind! Embrace us as your brethren! And let the tranquility of reason succeed the hurricane of war.

We require you to consider us as your friends, and then you will listen with attention. Our country is bleeding at every pore! Already scourged by the furies of ambition, she faints with the anguish and shrinks with horror, lest the uplifted lash of tyranny should fall into a wound — already lacerated to the bone.

Our provisions have been transported to foreign countries, and our husbandmen have been seduced from the plough, to be beaten by their officers, and starve beneath a knapsack; where the cottage once welcomed the free peasant to his evening’s rest, the barracks now imprison the hungry victim of military law.

Our bravest heroes languish beneath the scourge, are tortured by the iron that pierces the tender foot, and shot like dogs, to satiate the cruelty of their masters. The freedom of nature is drilled into slavery by torture and oppression— and the military tyrants of the day erect their infamous courts-martial upon the life and felicity of man.

Come then, you as well as the people, have your sufferings, and we are all brothers in distress, why should we increase our miseries by becoming foes. We are all men—we all have feeling—we all have a country! Alas, why should those be hostile to one another, whose nature, country, and misfortunes are the same. Nature and necessity call upon us to enlist under the banner of LIBERTY—and enroll ourselves as comrades in the grand contest of reform.

It is the practice of tyrants to separate you from your brothers, and you country—to lock you in the barracks from our conversation, and to point your bayonets at our bosoms before you knew that we were foes. Let this auspicious age be the last in which military laws shall sever man from man, and make the soldier the murderer, rather than the protector of the peasant.

Let us shake hands, and the union will be the origin of LIBERTY—and LIBERTY will give the soldier a home, where friend and family shall succeed to a barrack and a tyrant.—You have six pence per day, for clothes, food, and expenses; and out of this you have to find all things necessary for the existence of man; you have nothing of your own; even the common heritage of nature, personal liberty, is not yours; you are tied up like dogs, the lash sharpened with cruel knots lays bare your very bones; the spike runs through the sole of the foot, makes the suspended wretch writhe and howl with agony!

These are the rewards of your loyalty; and these the blessings which attend the service of a King. Let not the dignity of the man, or the honor of the soldier, be starved like a beast, or whipped like a slave; exercise your reason—put on the uniform of LIBERTY; make use alone of the arms of justice—and let the soldier be united to the man.

The years of freedom approach—the halcyon epoch of liberty draws near—philosophy erects the standard of happiness, and the nations of the earth unite beneath its shade; nature is preparing a feast upon the ruins of tyranny, and unites all the universe to partake of the banquet.

Will you soldiers refuse her gifts, and turn ungrateful from the feast!—Will you desert the colors, beneath which your brethren unanimously unite, and mutiny against the dictates of your own hearts—Is it your duty to obey your tyrant or yourself?

Consult your own feelings—and do not violate the oath which truth imprints upon the hears;—unite with the oppressed against the oppressors—and terminate the career of oppression.

Whether you shoot your fellow creatures under the impulse of private resentment, or whether you obey the nod of a tyrant, and massacre us by the thousands, the guilt is the same, you are convicted of murder!

And nature herself accuses you at the bar of social justice—be murderers no longer—follow no more the starving practice of military assassins—let soldiers protect the rights of citizens—and citizens will avenge the wrongs of soldiers!

In short, if you wish to sag and labor your lives away without comfort, to linger in a half starved existence, the slaves of cruelty and the engines of murder and oppression—if you wish, when old age has stolen away strength, to have your tottering limbs want a bed to repose on, and to be whipped from parish to parish as a vagrant then kiss the hand that scourges you, and be the means of enslaving the country that has nursed you in its bosom, but if you wish to enjoy the blessings of life and liberty to have a competency prepared for your age, in return for the labors of your youth—if you have the least regard for mankind or for yourselves—make your muskets the means of peace, and your swords the just defense of your COUNTRY’s LIBERTY!

The British Two-Pound Coin shows with an image of men fighting with bayonets, circa early 1800s. 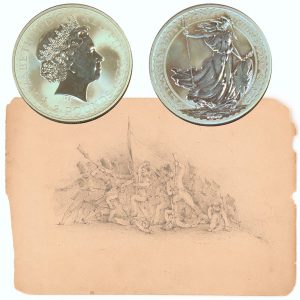