When the war broke out he was in the Chesapeake River getting a new crew aboard.

Having shipped over 450 men (counting officers), he put out of harbor on the 12th of July.

His crew was entirely new, drafts of men coming on board up to the last moment.

On the 17th, at 2 p. m. , Hull discovered four sail, in the northern board, heading to the westward.

At 3, the wind being very light, the Constitution made sail and tacked, in 18 1/2 fathoms.

At 4, in the N. E., a fifth sail appeared, which afterward proved to be the Guerriere.

At 6. 1 5 the wind shifted and blew lightly from the south, bringing the American ship to windward. She then wore round with her head to the eastward, set her light studding-sails and stay-sails, and at 7:30 beat to action, intending to speak the nearest vessel, the Guerriere.

The two frigates neared one another gradually and at 10 the Constitution began making signals, which she continued for over an hour.

At 3:30 a. m. on the 18th the Guerriere, going gradually toward the Constitution on the port tack, and but one half mile distant, discovered on her lee beam the Belvidera and the other British vessels, and signaled to them.

They did not answer the signals, thinking she must know who they were — a circumstance which afterward gave rise to sharp recriminations among the captains — and Dacres, concluding them to be Commodore Rodgers’ squadron, tacked, and then wore round and stood away from the Constitution for some time before discovering his mistake.

At 5 a. m. Hull had just enough steerage way on to keep his head to the east, on the starboard tack; on his lee quarter, bearing N. E. by N., were the Belvidera and Guerriere and astern the Shannon, Æolus, and Africa.

At 5.30 it fell entirely calm, and Hull put out his boats to tow the ship, always going southward.

At the same time he whipped up a 24 from the main-deck, and got the forecastle-chaser aft, cutting away the taffrail to give the two guns more freedom to work in and also running out, through the cabin windows, two of the long main-deck 24’s.

The British boats were towing also.

At 6 a. m. a light breeze sprang up, and the Constitution set studding-sails and stay-sails; the Shannon opened at her with her bow guns, but ceased when she found she could not reach her.

At 6:30, the wind having died away, the Shannon began to gain, almost all the boats of the squadron towing her.

Having sounded in 26 fathoms, Lieutenant Charles Morris suggested to Hull to try kedging.

All the spare rope was bent on to the cables, payed out into the cutters, and a kedge run out half a mile ahead and let go; then the crew clapped on and walked away with the ship, overrunning and tripping the kedge as she came up with the end of the line.

Meanwhile, fresh lines and another kedge were carried ahead, and the frigate glided away from her pursuers.

At 7:30 a. m. a little breeze sprang up, when the Constitution set her ensign and fired a shot at the Shannon.

It soon fell calm again and the Shannon neared.

At 9:10 a light air from the southward struck the ship, bringing her to windward.

As the breeze was seen coming, her sails were trimmed, and as soon as she obeyed her helm she was brought close up on the port tack.

The boats dropped in alongside; those that belonged to the davits were run up, while the others were just lifted clear of the water, by purchases on the spare spars, stowed outboard, where they could be used again at a minute’s notice.

Meanwhile, on her lee beam the Guerriere opened fire; but her shot fell short, and the Americans paid not the slightest heed to it.

Soon it again fell calm, when Hull had 2000 gallons of water started, and again put out his boats to tow.

The Shannon, with some of the other boats of the squadron helping her, gained on the Constitution, but by severe exertion was again left behind.

Shortly afterward, a slight wind springing up, the Belvidera gained on the other British ships, and when it fell calm she was nearer to the Constitution than any of her consorts, their boats being put on to her.

At 10:30, observing the benefit that the Constitution had derived from warping, Captain Byron did the same, bending all his hawsers to one another, and working two kedge anchors at the same time by paying the warp out through one hawse-hole as it was run in through the other opposite.

Having men from the other frigates aboard, and a lighter ship to work, Captain Byron, at 2 p. m., was near enough to exchange bow- and stern-chasers with the Constitution, out of range however.

Hull expected to be overtaken, and made every arrangement to try in such case to disable the first frigate before her consorts could close.

But neither the Belvidera nor the Shannon dared to tow very near for fear of having their boats sunk by the American’s stern-chasers.

The Constitution’s crew showed the most excellent spirit.

Officers and men relieved each other regularly, the former snatching their rest anywhere on deck, the latter sleeping at the guns.

Gradually the Constitution drew ahead, but the situation continued most critical.

All through the afternoon the British frigates kept towing and kedging, being barely out of gunshot.

At 3 p. m. a light breeze sprung up, and blew fitfully at intervals; every puff was watched closely and taken advantage of to the utmost.

At 7 in the evening the wind almost died out, and for four more weary hours the worn-out sailors towed and kedged.

At 10:45 a little breeze struck the frigate, when the boats dropped alongside and were hoisted up, excepting the first cutter.

Throughout the night the wind continued very light, the Belvidera forging ahead till she was off the Constitution’s lee beam; and at 4 a. m. on the morning of the 19th, she tacked to the eastward, the breeze being light from the south by east.

At 4:20 the Constitution tacked also; and at 5:15 the Æolus, which had drawn ahead, passed on the contrary tack.

Soon afterward the wind freshened so that Captain Hull took in his cutter.

The Africa was now so far to leeward as to be almost out of the race; while the five frigates were all running on the starboard tack with every stitch of canvas set.

At 9 a. m. an American merchant-man hove in sight and bore down toward the squadron.

The Belvidera, by way of decoy, hoisted American colors, when the Constitution hoisted the British flag, and the merchant vessel hauled off.

The breeze continued light till noon, when Hull found he had dropped the British frigates well behind; the nearest was the Belvidera, exactly in his wake, bearing W. N. W. 2 1/2 miles distant.

The Shannon was on his lee, bearing N. by W. 1/2 W. distant 3 1/2 miles. The other two frigates were five miles off on the lee quarter.

Soon afterward the breeze freshened, and “old Ironsides” drew slowly ahead from her foes, her sails being watched and tended with the most consummate skill.

At 4 p. m. the breeze again lightened, but even the Belvidera was now four miles astern and to leeward. At 6:45 there were indications of a heavy rain squall, which once more permitted Hull to show that in seamanship he excelled even the able captains against whom he was pitted.

The crew were stationed and everything kept fast till the last minute, when all was clewed up just before the squall struck the ship.

The light canvas was furled, a second reef taken in the mizzen top-sail, and the ship almost instantly brought under short sail.

The British vessels seeing this began to let go and haul down without waiting for the wind, and were steering on different tacks when the first gust struck them.

But Hull as soon as he got the weight of the wind sheeted home, hoisted his fore and main top gallant sails, and went off on an easy bow line at the rate of 11 knots.

At 7:40 sight was again obtained of the enemy, the squall having passed to leeward; the Belvidera, the nearest vessel, had altered her bearings two points to leeward, and was a long way astern.

Next came the Shannon; the Guerriere and Æolus were hull down, and the Africa barely visible.

The wind now kept light, shifting occasionally in a very baffling manner, but the Constitution gained steadily, wetting her sails from the sky-sails to the courses.

Hull at once stopped to investigate the character of two strange vessels, but found them to be only Americans; then, at midday, he stood toward the east, and went into Boston on July 26th.

In this chase Captain Isaac Hull was matched against five British captains, two of whom, Broke and Byron, were fully equal to any in their navy; and while the latter showed great perseverance, good seamanship, and ready imitation, there can be no doubt that the palm in every way belongs to the cool old Yankee.

Every daring expedient known to the most perfect seamanship was tried, and tried with success; and no victorious fight could reflect more credit on the part of the conqueror than this three days’ chase did on Hull.

The Constitution Hard Times Token shows with an image, circa 1815, of the naval ship escaping from the British ships. 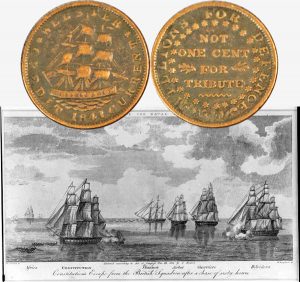