The Bicentennial Kennedy Half Dollar Coin remembers when people celebrated the country’s centennial year, especially the events in Philadelphia on July 4, 1876.

From American Progress, Or, The Great Events of the Greatest Century, by Richard Miller Devens, published in 1883:

One hundred years after the Declaration of Independence at Philadelphia, which great event gave birth and national sovereignty to a new Republic, the centennial commemoration of that august act filled the land with such festival and pageant of joy, as only a free people — prosperous, powerful, and renowned, — could be expected to exhibit.

From a feeble beginning, of thirteen weakly colonies, with a scattered population of three million people, struggling with war and debt, they had now attained to the colossal growth of nearly forty great commonwealths and forty million inhabitants, and, in respect to whatever relates to man’s material and moral advancement, found themselves unexcelled by any empire or kingdom on the face of the wide earth.

At Philadelphia, the central point of historic interest and centennial ovation, the resources of a whole nation’s pomp and glory seemed drawn upon, on a scale eclipsing, in extent and variety, any celebrative occasion in the annals of the republic.

Congress, sitting in its halls in the capitol at Washington, had a few days previously passed a resolution of adjournment to meet, on this wonderful day, in Independence Hall, where, one hundred years before, occurred the birth of the nation, and where, subsequently, was framed that immortal instrument which gave to the republic a constitutional government, the wisest and most admirable ever conceived by uninspired men.

That the celebration in this city was, in every respect worthy of an occasion so august and of a spot so historically sacred and national, was universally admitted.

A parade of troops, societies and officials took place in the morning, ending at Independence Hall.

The Centennial legion of troops from North and South was commanded by General Heath, formerly of the confederate army, and the procession in various other ways reflected the strength of the renewed feeling of national unity and fraternity.

In Independence Square, the vice-president of the United States, Hon. Thomas W. Ferry, presided; prayer was offered by Bishop Stevens; Dr. 0. W. Holmes’s ‘Welcome to the Nations’ was sung; Bayard Taylor read his national ode; Hon. William M. Evarts pronounced the oration ; the Declaration of Independence was read by Richard Henry Lee of Virginia, from the original document, which President Grant had entrusted for the purpose to the mayor of Philadelphia.

The faded and crumbled manuscript, held together by a simple frame, was then shown to the assembled multitude facing the platform, cheer following cheer, at this rare spectacle.

There was also sung the “Greeting from Brazil,” a hymn composed for the occasion by A. Carlos Gomez, of Brazil, by the request of the Emperor, Dom Pedro.

After the ode, the orchestra performed a grand triumphal march, with chorus, “Our National Banner,” the words being by Dexter Smith, of Massachusetts, and the music by Sir Julius Benedict, of England.

On the orator retiring from the speaker’s stand, the Hallelujah chorus from the ” Messiah ” was sung, and then the whole of the vast throng united in singing the Old Hundredth Psalm.

The magnificent spectacle presented by the procession was, however, the scene witnessed and enjoyed with most general interest and admiration.

It was miles in length, and in its ranks every one of the thirteen original States had a picked corps, and it was very evident, from the hearty manner in which General Heath, — in the absence of General Burnside, — formerly commanders, respectively, on the field of battle, of ‘the boys in blue’ and ‘the boys in gray,’ but now knowing but one color and one flag — was received, that the fraternization of the North and the South was genuine and complete, on this great natal anniversary.

The procession was under the lead of General and Governor Hartranft, and the splendid pageant was reviewed by General Sherman, Lieutenant-General Sheridan, and General Hooker, in whose company, on the guests’ platform, were to be seen hundreds of official dignitaries, of civil and military fame.

The Bicentennial Kennedy Half Dollar Coin shows with an illustration of Philadelphia’s centennial celebration, July 4, 1876. 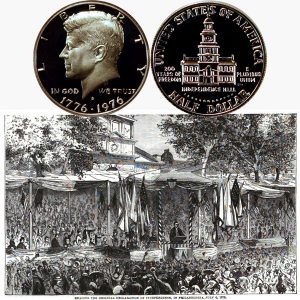