Today, the Bicentennial Quarter Coin remembers when the people of Massachusetts began gathering an army on April 20, 1775, the day after the fighting at Lexington and Concord.

From the History of the Siege of Boston, by Richard Frothingham, published in 1873:

The intelligence of the breaking out of hostilities was immediately followed by circulars from the Massachusetts committee of safety, calling out the militia.

One addressed to the towns, dated April 20, urged them “to hasten and encourage, by all possible means, the enlistment of men to form an army,” and to send them forward without delay.

“Our all,” it reads, “is at stake. Death and devastation are the certain consequences of delay. Every moment is infinitely precious. An hour lost may deluge your country in blood, and entail perpetual slavery upon the few of our posterity that may survive the carnage.”

Another circular, addressed to the other New England colonies, (April 26,) applied for as many troops as could be spared, to march forthwith to the assistance of Massachusetts.

One spirit, however, animated the country.

Companies of minute-men and individual volunteers rushed from every quarter to the seat of hostilities; and, joining the intrepid bands that fought the British troops on their way from Concord, commenced the memorable siege of Boston.

The committee of safety and the general officers had an arduous task, to keep so large a body of men together, and to provide for them; and until there were regular enlistments, there was, unavoidably, much confusion.

General Heath continued to issue orders until the arrival of General Ward, in the afternoon of April 20, who then took the command.

Other general officers were early on the ground.

On this day Colonel William Prescott was ordered to the command of a guard of five companies, — two of which were posted on Charlestown road, one towards Phipps’ Farm, one towards Menotomy, (West Cambridge,) and the remainder at other points.

On the next day the guards were posted in the same manner; but Colonels Prescott, Learned, and Warner, were ordered to march their regiments to Roxbury, to join General Thomas.

The army was soon joined by General Israel Putnam, and Colonels John Stark and Paul Dudley Sargent, who rendered valuable service in this trying season.

On the 22d, Colonel Stark was ordered to march to Chelsea, with three hundred men, to defend the inhabitants.

But no public character had more influence than Dr. Warren. He was judicious, as well as zealous and energetic.

“He did wonders,” Dr. Eliot writes, “in preserving order among the troops;” and at a time when there was extreme difficulty in maintaining discipline.

The alarm of the people was still great.

Many of the inhabitants of Cambridge had left their homes; and a general order of the 22d threatened punishment to any soldier who should injure property.

At this date many of the regiments were at Waltham and Watertown; but on the 26th, they were ordered to march forward to Cambridge.

On the 27th, Mr. Huntington, of Connecticut, writes, that General Ward was in Roxbury, and General Putnam commanded in Cambridge, “with too much business on their hands.”

At this time Colonel Stark was in Medford.

In a short time each colony made separate provision for its troops, — enlisting men, establishing their pay, supplying them with provisions, and appointing and commissioning their officers.

Before this, however, could be done, many of the minutemen, after a few days’ continuance before Boston, returned home, — some to look after their private affairs, and others to make permanent arrangements to join the army.

This left some of the avenues into the country but slightly guarded.

Gordon writes. that ” during the interval between their return and the provincials’ resorting afresh to the place of rendezvous, the land entrance into and out of the town, by the Neck, was next to unguarded.

“Not more than between six and seven hundred men, under Colonel Robinson, of Dorchester, were engaged in defending so important a pass, for several days together.

“For nine days and nights the colonel never shifted his clothes, nor lay down to sleep; as he had the whole duty upon him, even down to the adjutant, and as there was no officer of the day to assist.

“The officers, in general, had left the camp, in order to raise the wanted number of men.

“The colonel was obliged, therefore, for the time mentioned, to patrol the guards every night, which gave him a round of nine miles to traverse.”

The inhabitants of Boston, by the order of General Gage, were now cut off from intercourse with the country, and consequently were suddenly deprived of their customary supplies of provisions, fuel, and necessaries of life.

This exposed them to great distress.

Civil war, in all its complicated horrors, was at their doors, — the sundering of social ties, the burning of peaceful homes, the butchery of kindred and friends, — and all was uncertainty respecting their own fate.

The circular letter requesting men to fight in its entirety from The Journals of Each Provincial Congress, published in 1838:

The following circular letter was sent to the several towns:

The barbarous murders committed upon our innocent brethren, on Wednesday, the 19th instant, have made it absolutely necessary, that we immediately raise an army to defend our wives and children from the butchering hands of an inhuman soldiery, who, incensed at the obstacles they meet with in their bloody progress, and enraged at being repulsed from the field of slaughter, will, without the least doubt, take the first opportunity in their power, to ravage this devoted county with fire and sword.

We conjure you, therefore, by all that is sacred, that you give assistance in forming an army.

Our all is at stake.

Death and devastation are the certain consequences of delay.

Every moment is infinitely precious.

An hour lost may deluge your country in blood, and entail perpetual slavery upon the few of our posterity who may survive the carnage.

We beg and entreat, as you will answer to your country, to your own consciences, and above all, as you will answer to God himself, that you will hasten and encourage by all possible means, the enlistment of men to form the army, and send them forward to head quarters at Cambridge, with that expedition, which the vast importance and instant urgency of the affair demands.

The Bicentennial Quarter Coin shows with a war poster from 1918 that displays a World War I soldier shaking hands with a minuteman overseen by General Washington clasping both of their hands. 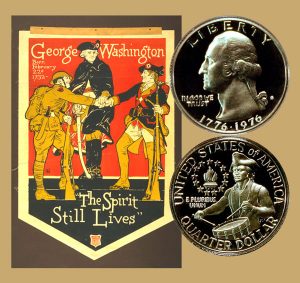