In March, 1747, Captain Phinehas Stevens with his company of about 30 men took possession of the fort and took action to defend it.

On April 4, 1747, a large party of French and Indians, commanded by M. Debeline, began their attack that lasted for three days.

An account of the attack taken from the History of Charlestown in New Hampshire by Jaazaniah Crosby, published in 1833:

Our dogs being very much disturbed gave us reason to think that the enemy were about, which occasioned us not to open the gate at the usual time.

But one of our men being very desirous to know the certainty, ventured out privately to set on the dogs about 9 o’clock in the evening, and went about twenty rods from the fort, firing off his gun, and urging on the dogs.

Whereupon the enemy, being within a few rods, immediately arose from behind a log and fired; but, through the goodness of God, the man got into the fort with only a slight wound.

The enemy, being then discovered, arose from all their ambushments. and attacked us on all sides.

The wind being very high, and everything exceeding dry, they set fire to all the old fence.

They also set fire to a log house about forty rods distant from the fort, to the windward, so that in a few minutes, we were entirely surrounded by fire, all which was performed with the most hideous shouting from all quarters, which they continued in the most terrible manner till the next day at 10 o’clock, at night, without intermission, in which time we had no opportunity either to eat or sleep.

But notwithstanding all their shouting and threatenings, our men seemed to be not in the least daunted, but fought with great resolution, which undoubtedly gave the enemy reason to think we had determined to stand it out to the last degree; and although they had provided themselves with a sort of fortification, which they had determined to push before them, and so bring fuel to the side of the fort in order to burn it down; yet, instead of performing what they threatened, and seemed to be immediately going to undertake, they called to us, and desired a cessation of arms until sunrise the next morning, which was granted; at which time they said they would come to a parley.

Accordingly the French General, Debeline, came with about 50 or 60 of his men with a flag of truce, and stuck it down within about 20 rods of the fort, in plain sight of the same, and said if we would send three men to him, he would send as many to us to which we complied.

The General sent a French lieutenant, with a French soldier, and made the following proposal, viz.: if we would immediately resign the fort, we should have our lives, and have liberty to put on all the clothes we had, and also take a sufficient quantity of provisions to carry us to Montreal, and bind up our provisions and blankets, lay down our arms, and march out of the fort; and that we should he assured of using our clothes and provision for our own comfort.

Upon our men’s returning, he desired that the captain would meet him half way, and give an answer to the above proposal.

He did not wait to have me give him an answer, but went on in the following manner, viz.: that what he had promised he was ready to perform; but upon our refusal he would immediately set the fort on fire, or run over the top; for he had 700 men with him; and if we made any further resistance, and should happen to kill one Indian, we might all expect to be put to the sword.

The fort, said he, I have resolved to have, or die. Now do what you please; for I am as easy to have you fight, as to give it up.

I told the General, that in case of extremity, his proposal would do; but inasmuch as I was sent here to defend this fort, it would not be consistent with my orders to give it up, unless I was better satisfied, that he was able to perform what he threatened.

I further told him, that it was but poor encouragement to resign into the hands of an enemy, if, upon one of their number being killed, they would put all to the sword, when it was very probable we had killed some of them already.

Well, said he, go into the fort, and see whether your men dare fight any more, and give me an answer quickly; for my men want to be fighting.

Whereupon I went into the fort, and called the men together, and informed them what the General said, and then put it to vote whether they would fight, or resign; and they voted to a man to stand it out; and also declared, that they would fight as long as they had life, rather than go with them.

Upon this I returned the answer, that we determined to fight it out; upon which they gave a shout, and so continued firing and shouting, till daylight next morning, it being now about noon; but they never had the courage to bring their fortification, nor run over the fort; but in lieu thereof, they spent the night in shooting their fiery arrows, which were easily put out.

The next morning at day light, they called to us and said, ‘Good morning,’ and desired a cessation of arms for two hours, at which time, they said they would come to a parley, and perhaps make peace with you; and their desire was granted; and they accordingly came with a flag of truce, as before; but the proposal, which they were now about to make, was so far different from the former, that the General did not care to make it himself; but sent two Indians, who came within about eight rods of the fort, and stuck down their flag, and desired that I would send out two men to them, which I accordingly did.

Upon the men’s coming to them, they made the following proposals: that in case we would sell them provisions, they would engage to go and leave us, and not fight any more; and then desired the men to go into the fort, and desire the captain to send an answer.

Whereupon I sent out the following answer, viz.: as to selling them provision for money, it was contrary to the law of the nation; but if they would send in a prisoner for every five bushels of corn, I would supply them; and upon the Indians returning the answer to the General, four or five guns were immediately fired against the fort, and then they withdrew, as we supposed; for we heard no more of them.

In all this time we had scarcely opportunity to eat or sleep. The cessation of arms gave us no great matter of rest; for we supposed they did it to get an advantage against us.

I believe men were never known to hold out with better resolution; for they did not seem to desire to sit or lie still one minute; for those who were not employed in firing at the enemy, were employed in digging trenches under the bottom of the fort.

We dug no less than eleven of them so deep, that a man could go and stand up right on the outside, and not endanger himself; so that, when these trenches were finished, we could wet all the outside of the fort, which we did, and kept it wet all night.

We drew some hundreds of barrels of water; and to undergo all this hard service, there were but 30 men; and though there were some thousands of guns shot at us, we had but two men slightly wounded, John Brown and Joseph Ely.

The New Hampshire State Quarter Coin shows with an image of Charlestown’s Main Street, circa 1910. 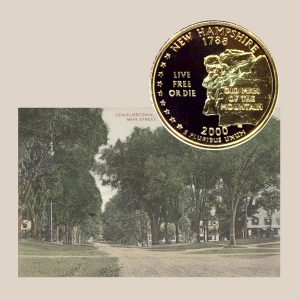