Today, the Albany NY Commemorative Silver Half Dollar Coin remembers the city’s recognition of one of their wartime heroes with a statue, 100 years ago.

From the Reading Eagle newspaper:

The occasion was the unveiling of a bronze equestrian statue of the heroic cavalry leader, which was purchased by joint contributions by the state and this city, his birthplace.

Veterans from all parts of the country, including half a hundred who served under Sheridan in the Shenandoah campaign, were here to participate in the ceremonies, the program for which included a memorial mass, a street parade through flag-draped streets and speeches by Gov. Whitman and former Gov. Glynn.

The statue is located in the plaza in front of the main entrance to the capitol.

From the Documents of the Assembly of the State of New York, Volume 18:

On Saturday, October 7, 1916, an equestrian statue of General Philip H. Sheridan was dedicated int he plaza opposite the eastern front of the capitol at Albany, NY.

It is the joint gift of the State of New York and individual subscribers.

The statue was completed by Daniel C. French from a model by the late J. Q. A. Ward, and stands on a  granite pedestal designed by Henry Bacon.

On that day, Governor Whitman gave a speech in remembrance of General Sheridan.

From the Public Papers of Charles Seymour Whitman, an excerpt follows:

Philip Henry Sheridan was a figure of peculiar appeal to the American imagination.

His dash and his daring, coupled with military genius of the highest order, gave him high place among the brilliant chieftains of his day, and his splendid democracy made him loved by the people of the United States no less than by his men.

It is well that the place of his birth should erect this statue to his memory, but Albany may hardly lay special claim to him merely by virtue of the fact that he first saw light of day here in the Capital of the Empire State.

The Nation called him, a country claimed him, and the whole people hold him as their own.

When disaster threatened the Union, of all the thousands that rallied, there was none who came with a finer enthusiasm than did Sheridan.

As one reads his life, the fact most driven home is the almost religious fervor that marked his devotion to America.

It was not merely a land to him, a stretch of country with certain definite boundaries — it was a faith.

Before his eyes was the vision that led the Pilgrims here.

In his soul, I believe, was the dream that inspired Washington — the vision and the dream of a government of all the people in which there should be no injustice but every freedom.

America is not a military nation. Aggressions and conquests have never been our aims, nor have we reared our youth in devotion to martial ideals.

Yet it is a fact that America has never failed in time of war to produce military geniuses that have won the admiration of the world, receiving recognition in history along with the gigantic figures of all time.

Even as military Europe acclaimed the genius of Washington, so was it ungrudging in its admission of the genius of Sheridan, and even as a passion for liberty drove both men to the heights of achievement so do I make bold to believe that as long as liberty remains a passion in the heart of America, other Washingtons and other Sheridans will rise in every hour of the country’s need.

The greatness of a nation may not be marked by its wealth nor by its population.

The past is piled high with ruins of civilizations which put their faith in [gold] and in numbers.

The driving force of a people is a spiritual force, and when a country begins to put its pocket above its soul, it turns its face away from progress and from permanence.

We honor ourselves today as we do honor to the memory of a great soldier and a great American.

This heroic statue stands as an expression of our love for a patriot, a reaffirmation of our faith in liberty as the governing principle in American life.

It stands as a sign that we have not forgotten the heroic past or the lessons of freedom that great men have written in blood for our guidance.

Sad indeed will be the day when Americans cease to remember America’s struggles, America’s temptations and America’s heroes, for in them is warning, in them is steadfastness and in them is constant inspiration.

On occasions like this, recalling the memories which are here revived, may we not measure the present by the standards of the past, searching our hearts to see if America means as much to us as it meant to the men whom the hero of the Shenandoah led to battle and to death?

Patriotism is a word of vast significance.

It does not confine itself to the bloody test of battle.

Citizens may show it as well as soldiers.

City and State, as well as Federal Government, make demand upon it.

Bad government may betray and shame the Nation as surely as any treason of war.

Injustice, oppression, corruption, false and evil leadership are enemies as menacing as the attack of any foreign foe.

It is well, of course, to look to the future, and the past must never become a dead weight upon progress, but we must not lose the inspiration that is to be found in the past nor forget the great lessons of sacrifice and courage and patriotism that are our heritage from vanished yesterdays.

We honor the hero dead, and we pay our tribute of loving respect to his old soldiers who are here today to look upon the form in bronze of their great commander.

Fast and faster they are going from us — these veterans in the uniform of the Grand Army of the Republic.

Few and fewer remain on earth to tell to the children and the children’s children of the tremendous events with which their names will be forever associated.

Every succeeding Memorial Day witnesses ever thinning lines and ‘ere long the flowers that mark a nation’s love and a people’s reverence will fall on all.

We cannot too resolutely address ourselves to the task of erecting monuments and memorials, patriotic altars, that may serve to keep holy the glories of the ideals to which their lives were dedicated.

Let us forever remember the things for which Sheridan and Sheridan’s men fought and the spirit which characterized their every act.

No greed of gain, no promise of personal advantage, no dream of conquest, urged them forward.

Sheridan and the soldiers of Sheridan ventured love and life and youth and all that man holds dear for an ideal that shines more lofty and more pure than any cause that ever drove men to battle and to death before.

Whatever the future may contain, it is ours to hold fast to the faith of the fathers, to live true to the memory of those who offered up their lives for freedom, for justice and for humanity.

The Albany NY Commemorative Silver Half Dollar Coin shows beside an image of the Sheridan Equestrian Statue in Capitol Park, not far from the general’s birthplace. 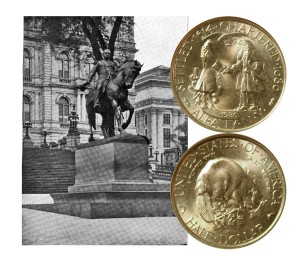