Today, the Denali National Park Quarter Coin remembers an expedition in 1890 that looked at different mountains and glaciers in the Alaska Territory.

San Francisco, Oct. 6 —The Examiner this morning had a two-column account of the experiences of Mark Kerr, of the United States topographical survey, who started last June under the auspices of the National Geographical Society to measure a base line at Yakumat Bay, by which a triangulation for an accurate survey of Mount St. Elias could be made.

Kerr was accompanied by Professor Russell, of the United States geographical survey, and six stalwart woodsmen from Seattle.

Although Kerr failed in his attempt to reach the summit of Mount St. Elias, owing to snow storms, the results of the expedition he summarizes as follows:

That the St. Elias coast lines are within American territory.

The discovery of the largest glacier in the world named Lucia, by Kerr. It moves fifteen feet a day, and forms a natural pass over the St. Elias range to the interior of Alaska.

The discovery of a great range of mountains behind the St. Elias range; also that between Mount St. Elias and Lucia glacier are several other peaks, averaging 12,000 feet high, and covering a far greater territory than does Mount St. Elias.

The party had several thrilling adventures, and Kerr had a narrow escape from freezing to death. He will go on to Washington with his report in a week or so.

In the Annual Report of the Director of the US Geological Survey, published in 1891, a portion of Professor Russell’s report provided more details of their adventures:

En route to Sitka we called at Victoria and Port Townsend, visited Taku Inlet and Glacier Bay, and reached Sitka on the 24th. On the afternoon of the same day we went on board the Pinta under command of Captain Farenholt, who had previously received instructions from the Secretary of the Navy to take us to Yakutat Bay. We sailed from Sitka the following morning and reached Yakutat on the afternoon of the 26th.

On the 27th I purchased a canoe and hired others to take us up the bay. The day following we started, with two of the Pinta’s boats to assist us, and made our first camp on the east side of the bay about 12 miles from its mouth and near the north end of Knight Island. The Pinta’s boats then returned and the following day we advanced a portion of our camp outfit about 12 miles farther. On the third day after leaving the Pinta we reached the actual base of operations on the west shore of Yakutat Bay not far from its head.

At our first camp Mr. Hosmer decided to turn back, as his uncertain health did not warrant the risks involved in camp life. He returned to Yakutat Mission in a canoe with an Indian, and a few days later sailed for Sitka in a small trading schooner. He reached his home safely.

From our camp, on the west shore of Yakutat Bay, I made excursions to the neighboring glaciers and the lower mountains near at hand, and also up the bay to Grand View Island. From this island we had a magnificent view of the mountains and glaciers about the head of the bay. Two of the glaciers come down to deep water and break off in immense cliffs of ice, thus furnishing the ice debris which obstructs all the upper portion of the inlet. One of the glaciers which enters the bay to the west of Grand View Island we named after Mr. Dalton, the pioneer explorer of the upper portion of the bay, and the second one of larger size, which comes down at the immediate head of the inlet, was named in honor of the president of the Geographic Society. So far as yet known, this is the largest and by far the most magnificent glacier in Alaska which comes down to the ocean and gives origin to bergs.

While at our shore camp, Mr. Kerr measured a base line and began a topographic survey. This survey was carried westward throughout the season. The heights of some of the lower stations occupied were measured by means of a mercurial barometer, a base barometer being read by Rev. Carl J. Hendrickson at Yakutat Mission. In this way a vertical base-line was established to be used in the determination of mountain heights.

After making such observations as seemed desirable from our camp on the shore, we began a line of march inland towards Mount St. Elias. At first we traveled along the base of the mountain, camping on the rocky spurs which project into the great glacier that intervenes between the mountains and the sea.  About the 1st of August we were approximately midway between Yakutat and St. Elias, at a place we named Blossom Island. At that point an island of rock, a mile or so in diameter, rises above the encircling glaciers, and is covered with most luxuriant vegetation. We there established a base camp, and Mr. Kerr and myself, with two camp hands, started up the Marvine glacier, which skirts Blossom Island on the west. The camp hands who did not accompany us were busy during our absence in advancing rations from the caches made on the march from Yakutat Bay to Blossom Island, and in forwarding necessary supplies to a rendezvous above snow line, from which we obtained the necessary provisions during our stay in the mountains.

On going up Marvine glacier we took the most westerly of its main branches, and found a pass, named Pinnacle Pass, leading westward across the Hitchcock range to the Lucia glacier, which skirts that range on the west. The Hitchcock range is the most westerly spur of Mount Cook. The Lucia glacier rises to the north of Mount Cook, and flows to the southwest and finally to the south. Crossing this glacier we found another opening in the mountains, which we called Dome Pass, leading in the direction which we wished to travel. This took us to another southward flowing glacier, called the Conrad glacier, the most westerly branch of which derives its snow supply from the northeastern slope of Mount St. Elias. We ascended this branch to the immediate base of the pyramid forming the summit of St. Elias and reached an elevation of 8,700 feet, but were turned back by a heavy snowstorm before reaching the divide north of the peak, which would command a view to the north of the main range. We made another attempt two days later, but did not gain as great an elevation as at the first trial. After returning from the second attempt, I made an effort to ascend the Lucia glacier, which promises to lead to a pass by means of which the northern slope of the St. Elias range may be gained. During this trip I was delayed by stormy weather, and finally turned back by a heavy snow storm which rendered traveling almost impossible. From an elevation of about 5,000 feet on the north side of Mount Cook, I had an unobstructed view of the great drainage basin of the Lucia glacier, and of the many high peaks bordering it on the north. This route furnishes a way for exploring a large part of the interior, and would, I have little doubt, lead to the country draining northward from the St. Elias range.

On returning from the excursion up the Lucia glacier I descended to Blossom Island, where I rejoined Mr. Kerr, who had reached there a few days previously. My stay above the snow line was from August 2 to September 6. From Blossom Island I crossed Marvine glacier and reached the extreme southern end of the Hitchcock range. From there I made an excursion due south about 5 miles onto the great Malaspina glacier. In the meantime Mr. Kerr returned to Yakutat Bay, with the intention of occupying a station on its eastern shore that would command Disenchantment Bay, which extends easterly from the head of the main inlet. This plan was not carried out, however, owing partly to stormy weather, and Mr. Kerr proceeded to Yakutat Mission, where he occupied a station formerly used by the U. S. Coast Survey. This enabled him to repeat the measurements made some years ago by Dall and Baker and to identify Mount St. Elias, Mount Cook, and Mount Vancouver.

On returning to Blossom Island from my trip to the Piedmont glacier I started at once for Yakutat Bay, where I arrived about September 20. On the 22d the steamer Corwin, in command of Capt. C. L. Hooper, arrived and took us on board. The Corwin then steamed up the bay, passing Grand View Island, to the mouth of Disenchantment Bay. This enabled us to see considerable country not previously examined, but did not furnish an opportunity for work on shore. Soundings were made at various intervals up to within a mile of the foot of Hubbard glacier, and gave a depth of from 40 to 60 fathoms. The Corwin returned to Yakutat Mission the same day, sailed from there on the 25th, and reached Port Townshend, Wash., on October 2. From there I returned to Washington, D. C.

Mr. Russell’s report can also be found in the third volume of the National Geographic Magazine.

The Denali National Park and Preserve Quarter Coin shows with an image of Mount St. Elias as seen from Icy Bay. 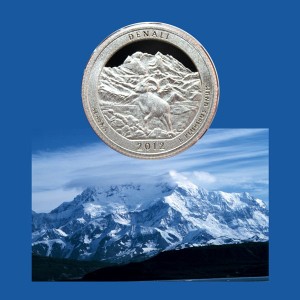