Now, the area offers a beautiful park filled with tall trees, an adjacent lake, and trails with interpretive signs describing the horrors of that day 152 years ago.

From the book, Battles and Leaders of the Civil War, Being for the Most Part Contributions by Union and Confederate Officers : Based Upon “The Century War Series,” published in 1888:

On the 4th of October General John M. Corse, commanding the Fourth Division, Fifteenth Corps, stationed in observation at Rome, Georgia, was ordered by General Sherman to move by railway to Allatoona to assist the garrison at that point against a heavy force of Hood’s army, which was moving north from Kennesaw Mountain.

With a part of his command Corse reached Allatoona at 1 A. M. on the 5th. The battle which took place that day is described in his report as follows:

“The ammunition being unloaded, and the train sent back [to Rome] for reinforcements, accompanied by Colonel Tourtellotte, the post commandant, I rode around and inspected the ground and made such disposition of the troops as, in my judgment, was necessary to hold the place until daylight.

“Under a brisk cannonade, kept up for near two hours, with sharp skirmishing on our south front and our west flank, the enemy pushed a brigade of infantry around north of us, cut the railroad and telegraph, severing our communications with Cartersville and Rome.

“The cannonading and musketry had not ceased when, at half-past 8 A. M., I received by flag of truce, which came from the north on the Cartersville road, the following summons to surrender:

“‘Sir: I have placed the forces under my command in such positions that you are surrounded, and to avoid a needless effusion of blood I call on you to surrender your forces at once and unconditionally. Five minutes will be allowed you to decide. Should you accede to this you will be treated in the most honorable manner as prisoners of war. I have the honor to be, very respectfully yours, S. G. FRENCH,

“To which I made the following reply:

“‘Your communication demanding surrender of my command I acknowledge receipt of, and respectfully reply that we are prepared for the ‘needless effusion of blood’ whenever it is agreeable to you. I am, very respectfully, your obedient servant, JOHN M. CORSE,

“I then hastened to my different commands, informing them of the object of the flag, etc., my answer, and the importance and necessity of their preparing for hard fighting. . . . I had hardly issued the incipient orders when the storm broke in all its fury. . . .

“The fighting up to . . . about 11 A.M. was of the most extraordinary character. . . . About 1 P. M. I was wounded by a rifle ball, which rendered me insensible for some thirty or forty minutes, but managed to rally on hearing some person or persons cry, ‘Cease firing,’ which conveyed to me the impression that they were trying to surrender the fort.

“Again I urged my staff, the few officers left unhurt, and the men around me to renewed exertions, assuring them that Sherman would soon be there with re-enforcements.

“The gallant fellows struggled to keep their heads above the ditch and parapet, had the advantage of the enemy, and maintained it with such success that they [the Confederates] were driven from every position, and finally fled in confusion, leaving the dead and wounded and our little garrison in possession of the field.”

General Sherman, in his “Memoirs,” says:

“We crossed the Chattahoochee River during the 3d and 4th of October, rendezvoused at the old battle-field of Smyrna Camp, and the next day reached Marietta and Kennesaw.

“The telegraph wires had been cut above Marietta, and learning that heavy masses of infantry, artillery, and cavalry had been seen from Kennesaw (marching north), I inferred that Allatoona was their objective point; and on the 4th of October I signaled from Vining’s Station to Kennesaw, and from Kennesaw to Allatoona, over the heads of the enemy, a message for General Corse at Rome, to hurry back to the assistance of the garrison at Allatoona. . . .

“Reaching Kennesaw Mountain about 8 A.M. of October 5th (a beautiful day), I had a superb view of the vast panorama to the north and west. To the south-west, about Dallas, could be seen the smoke of camp-fires, indicating the presence of a large force of the enemy, and the whole line of railroad, from Big Shanty up to Allatoona (full fifteen miles), was marked by the fires of the burning railroad.

“We could plainly see the smoke of battle about Allatoona, and hear the faint reverberation of the cannon.

“From Kennesaw I ordered the Twenty-third Corps (General Cox) to march due west on the Burnt Hickory road, and to burn houses or piles of brush as it progressed, to indicate the head of column, hoping to interpose this corps between Hood’s main army at Dallas and the detachment then assailing Allatoona.

“The rest of the army was directed straight for Allatoona, north west, distant eighteen miles. The signal-officer on Kennesaw reported that since daylight he had failed to obtain any answer to his call for Allatoona; but, while I was with him, he caught a faint glimpse of the tell-tale flag through an embrasure, and after much time he made out these letters: ‘C,’ ‘R,’ ‘S,’ ‘E,’ ‘H,’ ‘E,’ ‘R,” and translated the message, ‘Corse is here.’

“It was a source of great relief, for it gave me the first assurance that General Corse had received his orders, and that the place was adequately garrisoned. I watched with painful suspense the indications of the battle raging there, and was dreadfully impatient at the slow progress of the relieving column, whose advance was marked by the smokes which were made according to orders, but about 2 P. M. I noticed with satisfaction that the smoke of battle about Allatoona grew less and less, and ceased altogether about 4 P. M.

“For a time I attributed this result to the effect of General Cox’s march, but later in the afternoon the signal-flag announced the welcome tidings that the attack had been fairly repulsed, but that General Corse was wounded. The next day my aide, Colonel Dayton, received this characteristic dispatch:

“‘I am short a cheekbone and an ear, but am able to whip all h-l yet! My losses are very heavy. A force moving from Stilesboro’ to Kingston gives me some anxiety. Tell me where Sherman is. JOHN M. CORSE, Brigadier-General.”

“Inasmuch as the enemy had retreated southwest, and would probably next appear at Rome, I answered General Corse with orders to get back to Rome with his troops as quickly as possible. . . .

“I esteemed this defense of Allatoona so handsome and important that I made it the subject of a general order, viz., No. 86, of October 7th, 1864:

“‘The general commanding avails himself of the opportunity, in the handsome defense made at Allatoona, to illustrate the most important principle in war, that fortified posts should be defended to the last, regardless of the relative numbers of the party attacking and attacked. . . . The thanks of this army are due and are hereby accorded to General Corse, Colonel Tourtellotte, Colonel Rowett, officers, and men, for their determined and gallant defense of Allatoona, and it is made an example to illustrate the importance of preparing in time, and meeting the danger, when present, boldly, manfully, and well.

“‘Commanders and garrisons of the posts along our railroad are hereby instructed that they must hold their posts to the last minute, sure that the time gained is valuable and necessary to their comrades at the front. By order of “‘MAJOR-GENERAL W. T. SHERMAN.

The Civil War Commemorative Half Dollar Coin shows with an artist’s image of the barren hills of the battlefield in 1864. 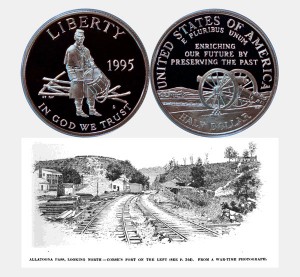