Today, the Huguenot-Walloon Commemorative Silver Half Dollar Coin remembers the peace treaty signed by the Dutch and the Indian nations on August 30, 1645 after long years of bloodshed.

From the History of the United States of America, From the Discovery of the Continent by George Bancroft, published in 1882:

While the limits of New Netherland were narrowed by competitors on the east and on the south, and Long Island was soon to be claimed by the agent of Lord Stirling, the colony was almost annihilated by the neighboring Algonkin tribes.

Angry and even bloody quarrels had arisen between dishonest traders and savages maddened by intoxication.

In 1640, the blameless settlement on Staten Island had, in consequence, been ruined by the undiscriminating vengeance of the tribes of New Jersey.

An Indian boy who had been present when, years before, his uncle had been robbed and murdered, had vowed revenge, and, in 1641, when grown to man’s estate, remembered and executed the vow of his childhood.

A roving but fruitless expedition into the country south of the Hudson was the consequence.

The Raritans were outlawed, and a bounty of ten fathoms of wampum was offered for every member of the tribe.

The approach of danger brought with it the necessity of consulting the people, and the commons elected a body of twelve to assist the governor.

De Vries, the head of the committee, urged the advantage of friendship with the natives.

But the son of a chief, stung by the conviction of having been defrauded and robbed, aimed an unerring arrow at the first Hollander exposed to his fury.

In 1642, a deputation of the river chieftains hastened to express their sorrow, and deplore the never-ending alternations of bloodshed.

The murderer they could not deliver up; but, after the custom of the Saxons in the days of Alfred, of the Irish under Elizabeth, in exact correspondence with the usages of earliest Greece, they offered to purchase security for the murderer by a fine for blood.

Two hundred fathom of the best wampum might console the grief of the widow.

“You yourselves,” they added, “are the cause of this evil; you ought not craze the young Indians with brandy. Your own people, when drunk, fight with knives and do foolish things; you cannot prevent mischief till you cease to sell strong drink to the Indian.”

Kieft was inexorable, and demanded the murderer.

In February, 1643, a small party of Mohawks from the vicinage of Fort Orange, armed with muskets, descended from their fastnesses, and claimed the natives round Manhattan as tributaries.

At the approach of the formidable warriors of a braver Huron race, the more numerous but cowering Algonkins crowded together in despair, begging assistance of the Dutch.

Kieft, though warned that the ruin would light upon the Dutch themselves, seized the moment for an exterminating massacre.

In the stillness of a dark winter’s night, the soldiers at the fort, joined by freebooters from Dutch privateers, and led by a guide who knew every by-path and nook where the savages nestled, crossed the Hudson, for the purpose of destruction.

The unsuspecting tribes could offer little resistance. Nearly a hundred perished in the carnage, which daybreak did not end.

Proud of his deed of treachery, Kieft greeted the returning troops with exultation. But his joy was short.

No sooner was it known that the midnight attack had been made not by the Mohawks, but by the Dutch, than every Algonkin tribe round Manhattan took up arms with savage frenzy.

From the shores of New Jersey to the borders of Connecticut not a bowery was safe.

It was on this occasion that Anne Hutchinson perished with her family.

“Mine eyes,” says a witness, “saw the flames at their towns, and the frights and hurries of men, women, and children.”

The director was compelled to desire peace.

On the fifth of March, 1643, a convention of sixteen sachems assembled in the woods of Rockaway; and at daybreak De Vries and another, the two envoys from Manhattan, were conducted to the center of the little senate.

Their best orator addressed them, holding in one hand a bundle of small sticks.

“When you first arrived on our shores you were destitute of food; we gave you our beans and our corn; we fed you with oysters and fish; and now, for our recompense, you murder our people.”

Such were his opening words. Having put down one little stick, he proceeded:

“The traders whom your first ships left on our shore, to traffic till their return, were cherished by us as the apple of our eye: we gave them our daughters for their wives; among those whom you have murdered were children of your own blood.”

He laid down another stick; and many more remained in his hand, each a memento of an unsatisfied wrong.

“I know all,” said De Vries, interrupting him, and inviting the chiefs to repair to the fort.

The speaking ceased; the chieftains gave costly presents to each of the whites: and then the party went by water to New Amsterdam.

There peace was made; but the presents of Kieft were those of a niggard, and left in the Indians rankling memories.

A month later, a similar covenant was made with the tribes on the river.

But the young warriors among the red men were not pacified; one had lost a father or a mother; a second owed revenge for the death of a friend.

“The presents we have received,” said an older chief, “bear no proportion to our loss; the price of blood has not been paid;” and war was renewed.

The commander of the Dutch troops was John Underhill, a fugitive from New England, a veteran in Indian warfare, and one of the bravest men of his day.

For licentiousness, he, in 1640, had been compelled, at Boston, in a great assembly, on lecture-day, during the session of the general court, dressed in the habit of a penitent, to stand upon a platform, and with sighs and tears and brokenness of heart and the aspect of sorrow, to beseech the compassion of the congregation.

In the following year he removed to New Netherland, and now, with an army of one hundred and twenty men, became the protector of the Dutch settlements.

After two years’ war the Dutch were weary of danger; the Indians tired of being hunted like beasts.

The Mohawks claimed a sovereignty over the Algonkins; their ambassador appeared at Manhattan to negotiate a peace; and, on the thirtieth of August, 1645, in front of Fort Amsterdam, according to Indian usage, under the open sky, in the presence of the sun and of the ocean, the sachems of New Jersey, of the River Indians, of the Mohicans, and of Long Island, acknowledging the chiefs of the Five Nations as witnesses and arbitrators, and having around them the director and council of New Netherland, with the commonalty of the Dutch, set their marks to a solemn treaty of peace.

The joy of the colony broke forth into a general thanksgiving; but infamy attached to the name of Kieft, the author of the carnage; the emigrants desired to reject him as their governor; the West India company disclaimed his barbarous policy.

A better day dawned on New Netherland when the brave and honest Stuyvesant, recently the vice-director of Curacao, wounded in the West Indies, in the attack on St. Martin, a soldier of experience, a scholar of some learning, was promoted for his services, and, in May, 1647, entered on the government of the province.

The superseded governor embarked for Europe; but the large and richly laden ship in which he sailed was dashed in pieces on the coast of Wales, and the man of blood was buried beneath the waves.

The Huguenot-Walloon Commemorative Silver Half Dollar Coin shows with an artist’s image of Dutch men trading with the Indians in the early days of New Netherland. 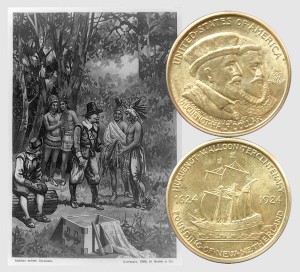