Today, the Half Cent Coin remembers a vintage news article printed in The Times of Charleston 200 years ago.

Fraud Detected — the Dead and Alive

We have been favored with the following entertaining extract of a letter from an officer to his friend. [London Literary Panorama.]

“I was traveling with a party of officers and a guard of Sepoys; we stopped to refresh ourselves, and among the inhabitants of a village who came out to view us as objects of curiosity, one fellow was so unusually audacious as to force himself into the tent where we were dining, using strange gestures, and making an extravagant noise.

“Having in vain endeavored to learn his meaning, we ordered him out; he refused to go, and we then ordered the palanquin bearers in attendance to force him; on his being thus removed, we heard a confused noise and lamentation, and were informed that this fellow, who pretended to be a devotee, had swooned away from the effect of pollution in being touched by our palanquin bearers, who were parriars.

“We rather laughed at this account; louder lamentations were heard; and word was brought that the man was dead.

“We went out and found a great many people assembled round the body, lamenting and complaining loudly of the outrage.

“It became necessary to order our Sepoys under arms, and the servants to be on their guard.

“We send for the headmen of the village, and the body was thoroughly examined by he natives, and pronounced to be dead.

“There certainly appeared no visible signs of life, but the trifling injury he could have received by the handling, to overcome merely his own resistance, and absurdity of a man’s dying from the effect of fancied pollution, added to my experience of their powers of deception, perfectly satisfied my mind that this fellow was an imposter.

“Desiring my brother officers to leave the business to my management, I acquainted the natives that I had an infallible means of knowing whether the man was dead or not.

“That, if there was the least spark of life remaining, since the body had received no injury, I could revive him, though the remedy would be exceedingly severe.

“They wanted to remove him; but this I would not suffer, well knowing they might make any report they pleased concerning his death and create much trouble.

“I had laid hold of his hand, and it was some time before I could feel a pulse, which completely satisfied me; but I kept my own counsel.

“Again the people pressed forward tumultuously, with an apparent design to carry away the body by force; but, ordering the Sepoys to advance with fixed bayonets, I made them retire to a distance, suffering only the headmen to remain.

“In vain did I endeavor to persuade them that the man counterfeited; until finding nothing else would do, I assured them I possessed powers they had no conception of, and without touching the body again, I would convince them of the man being still alive, by drawing a flame from his body which they should see, and which would continue burning and consuming him unless he arose from the earth.

“My brother officers listened with nearly as much attention as the natives.

“I sent my Dabash, Punappa, to enjoin silence on the multitude, as a miracle was going to be performed by an European Brahmin, which he assured them I was, (knowing I had officiated as a chaplain).

“Ordering my traveling escritoire to be brought, I placed it near the man’s head and took from it a wax taper, a small match and little bottle; articles I carried for the convenience of getting a light when wanted.

“I also took out a bit of sealing wax, wrapped within a piece of white paper.

“I then directed all to be silent while the ceremony was performing, under the pain of their being struck with death.

“Having had this explained by Punappa to the chiefs, and by them again to the people; I was well satisfied the dead man heard and understood the whole, by the involuntary twitching I saw in his muscles.

“When all was quiet, I began by walking slowly round the extended body, four times, laying one of hte four articles each time at his feet, uttering with a solemn loud voic, the following five Latin words that happened to occur: ‘Omne bene, non ine paena.’

“I believe that the fall of a pin might have been heard while I was performing this mummery.

“Having managed with tolerable seriousness, I took up all the articles, stood across the man, and raising both my arms as high as I could reach called aloud, “silence.”

“Then bending over the body, I held the match in my right hand, the wax paper in my left; and, drawing a cork from the bottle of phosphorous just above his navel, at the moment I applied the match to light it, as it were, from his body, I began to sing ‘God save great George our King.’

“Lighting my taper, I proceeded with my work, by meting the sealing wax, and dropping it hot, close above his navel.

“But the fellow had not the patience to stay for more than two or three good drops of my miraculous wax, before he jumped up and ran away, bellowing and clawing his belly, without stopping to thank me for his cure, or answering the calls of others, until he got within the village.

“That the fellow had heard and understood what passed, with my declaration that I possessed a power to draw forth a flame from his body, was evident; and I depended on the sudden attack of the burning wax, on so tender a part, heightened by his own imagination, to overthrow all the obstinacy of trick, and produce some such effect as would satisfy all that he was not dead.

“What his particular aim was, it might be difficult to make out.”

The Half Cent Coin shows with an image of a Sepoy sentry, circa 1895. 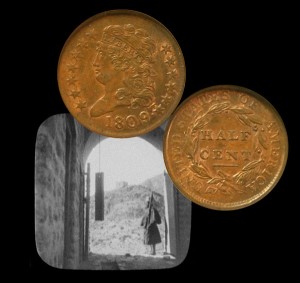