Today, the Maine State Quarter Coin remembers 411 years ago when the English Captain Weymouth of the ship Archangel landed on Monhegan Island off the coast of Maine.

But the French had traveled to the area earlier.

From the History of Maine by John S. C. Abbott published in 1892:

It was not until the middle of May that the survivors were able to re-embark in search of a milder climate.

Coasting westwardly, they entered Penobscot Bay. Thence, continuing their cruise, they cast anchor at the mouth of the Kennebec.

Here De Monts raised a cross, and took possession of the country in the name of the King of France. He traversed Casco Bay, occasionally casting anchor at attractive spots along the silent shores, which seemed to invite a settlement.

But his company being greatly diminished, and the Indians being manifestly unfriendly, as well they might be, after going as far south as Cape Cod, he returned to Port Royal.

Here De Monts found another ship from France, and an accession of forty men to strengthen the colony.

He constructed two forts, built several log-houses, and, having given minute direction for the management of affairs, returned to France.

Four gentlemen of much distinction were left to administer the government of the colony, and to explore the country.

Rumors of these important movements reached the British government.

The immensity of the territory which France claimed, and the efforts of the French to colonize those countries, created alarm.

The Earl of Southampton, with Lord Arundel and others, under the patronage of the crown, fitted out a ship to visit these coasts.

The object proclaimed was to find a northwest passage to India.

The real object was to watch the proceedings of the French, and to prepare the way for the establishment of English colonies.

A thoroughly-built, well-furnished ship, “The Archangel,” sailed from the Downs on the 31st of March, 1605. Capt. George Weymouth was in command.

On the 12th of May the white sands of Cape Cod hove in sight.

He directed his course northerly toward the coast of Maine.

On the 17th he came to an island about six miles from the shore, and about noon cast anchor upon its north side. The island, to his eyes weary of gazing upon the drear expanse of the ocean, appeared very beautiful.

He judged the island to be about six miles in circumference, embracing an area of a thousand acres.

The anchorage was good, and cod and haddock were caught in abundance.

Waterfowl in large flocks were hovering over the cliffs.

Weymouth went on shore in his long-boat, and took possession of the island in the name of King James I., King of England.

He also erected a cross, in token that the Christian religion was to be there established.

He soon after gave a very terrible exhibition of his practical piety.

From his mast-head he discerned far away in the distance the peaks of a ridge of mountains.

To the island he gave the name of St. George. It is now generally admitted that this was the present island of Monhegan.

After a tarry here of two days, taking in wood and water, on Sunday the 19th Weymouth again spread his sails, and, passing several other islands, reached the mainland at the distance of about nine miles.

Rosier, the historian ‘of the voyage, writes : ” It pleased God to send us, far beyond our expectations, in a most safe berth, defended from all winds, in an excellent depth of water for ships of any burden, and which was named Pentecost Harbor.”

Weymouth, with a well-armed party, explored the shores: others engaged in fishing.

They obtained an abundance of delicious salmon, and other fishes in great variety. They also feasted upon lobsters and other shell-fish.

Wild currants were found, and luxuriant vines which promised an abundance of grapes.

They found the soil to be very rich. Digging a garden, they planted peas, barley, and other seeds, which in sixteen days grew up eight inches.

This was the first attempt made by Europeans to cultivate the soil of Maine.

Fourteen well-armed men were sent out in a boat on an exploring tour.

From the account given, it is supposed that they visited Squirrel Island and Cape Xewagen.

In accordance with the custom of the times, Weymouth raised a 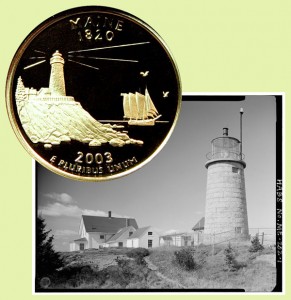 cross upon every important point at which he touched.

The Maine State Quarter Coin shows with an image of the Monhegan light station, circa 1933.