Today, the Alaska State Quarter Coin remembers the continuing eruptions of an Alaskan volcano 126 years ago.

An Alaska Volcano Becomes Active After a Seven Years’ Slumber.

San Francisco, May 16.—News has reached here by letter from Port Blinlink, Ounalaska, that Bogolslor, the Alaskan volcano that blazed and smoked for a time about seven years ago, is again in eruption.

February 17th and 22d there were signs of great activity, smoke and flame pouring from the crater and rising to a great height. The sky for a week was clouded with ashes which fell in liberal showers in the town of Ilintlink, forty-four miles away.

To those who saw the eruption it seemed that the pillar of fire and smoke was fully fifteen miles high.

A Great Volcanic Eruption in Alaska.

A recent dispatch from San Francisco brings word that Bogoslov, the Alaskan volcano that rose from the ocean depths about seven years ago and blazed and smoked for a time, is again in eruption.

This recent eruption began February 10, and has continued at intervals.

April 17 and 22 there were signs of great activity, smoke and flame pouring from the lofty crater, and rising to a great height.

The sky for weeks was clouded with ashes, and these fell in liberal showers in the town of Illuliuk, forty-four miles to the eastward.

To the people who saw the eruption it seemed a pillar of fire and smoke fully fifteen miles high, rising from the horizon and losing itself in the low clouds.

Professor Davidson, of the Coast Survey, estimates that the volcanic pillar must have been sent up to a height of at least four miles above the sea.

Captain Everett Smith, of the steam whaler Orca, passed near the scene soon after the first eruption. He noted that four new islets, each detached, but near the volcano island, had arisen from the depths.

As the ocean bottom here, off Bogoslov, sounds 844 fathoms, and there is a depth of 1,200 fathoms about twelve miles away, an idea may be gained of the tremendous energy required to raise an islet from the ocean bottom above the surface.

From the Scientific American of September 1890:

Every vessel from the Aleutian Islands arriving at San Francisco nowadays reports the liveliest sort of doings along that volcanic chain.

The subterranean energies that are incessantly seeking a means of escape to the surface have massed their forces along that line of volcanic vents, and are making a display of pyrotechnic brilliancy and awful energy that is seldom seen anywhere.

It is now reserved for a very few spectators, most of whom are badly frightened by the exhibition.

Volcanoes that have not smoked for many years have suddenly become flaming chimneys, connecting with the molten regions beneath our feet.

The grandest spectacles and the most remarkable phenomena are connected with New Bogoslov, which reared its head above the waters about eight years ago.

At one end of Unalaska Island is the pass between the islands leading to the seal-breeding grounds of the Pribylov group.

Bogoslov, a little mass of volcanic rock, is only about forty miles from this channel, and all vessels going to and from the sealery have a fine chance now to see the volcano in all its splendor.

Old Bogoslov was puffing away with other volcanoes when Levasheff discovered it 122 years ago; but ten years later, when Cook passed within seventeen miles of it, it was quiet.

Two years after that time it was in a mild state of eruption, and in 1796 the island was reported to be rising from the sea.

The greatest changes at Bogoslov have occurred when no one was there to see.

Big surprises have once or twice awaited vessels from the south that approached the island without knowing that momentous happenings had occurred.

For the first fifteen years of this century Bogoslov kept gradually adding to his stature, but from 1815 until 1882 no eruptions are known to have occurred.

In 1883, however, a most surprising discovery was made.

A new Bogoslov had risen from the sea, probably in 1882, in front of the old volcano, with which it was connected by a gravel isthmus.

The new island was 700 feet above the sea. It was a mass of flames and sulphuric vapors, and could not be inspected at close range until some officers of the cutter Corwin had the temerity, in 1884, to land on its smoking sides.

It was nothing but a mass of ashes and volcanic debris, and down its slopes extended many crevices, from which stifling fumes and steam issued.

These crevices were so hot that it was impossible to take the temperature, the mercury bursting the bulb in its surprise at the violent expansion.

Once since then the new volcano has been ascended for a short distance, and in 1888 its height was still reported to be about 700 feet.

This new island had been thrown up by an eruption at the bottom of the ocean, which had gradually spread ashes over the ocean bed, covering a wide area, until they finally appeared above the surface and a new land was born.

It was a splendid object lesson in the making of volcanic islands. But still greater wonders were in store for this neighborhood.

In February, this year, the new island with its little craters illumined the Arctic winter for many miles around.

The night was almost as light as day, except when clouds of pumice dust filled the air.

Several other little islands suddenly rose above the surface to join their elder sister. All of them had risen from profound depths.

Their foundations are laid on the ocean bed three-fourths of a mile below the surface. It can be readily imagined, therefore, that a perfectly enormous quantity of ashes and debris have found exit through the crater or craters at the bottom of the ocean.

It is estimated that on February 22 the ashes from New Bogoslov rose to a height of about five miles, and the column of smoke, a dense black pillar, was computed to rise fifteen miles in the air.

Such a sight as this is seldom witnessed in any part of the world.

The natives of islands thirty or forty miles distant were terribly frightened, and thought they were going to be buried in the ashes that fell far and wide over that region.

According to the most recent reports, when the new islands are not vomiting smoke and dust, steam jets often almost conceal them from view, and the hissing noise they make can be heard at a distance of several miles.

There is no telling where this new activity on our western borders will end.

Other volcanoes in that neighborhood, which have long been inactive, are adding their lava, cinders, and ashes to the general commotion.

Natives are moving to the parts of their islands most distant from the volcanoes.

At night the scene is said to be most beautiful, for from one to another of these volcanoes stretching along the Aleutian Islands great tongues of flame shoot from craters, and rise toward the zenith like northern lights.

It is a spectacle worth going far to see, but although it is adding some new islands to the domain of Uncle Sam, few will be able to see the process by which it is done.

The Alaska State Quarter Coin shows with an image of an Alaskan volcano erupting, circa 1913. 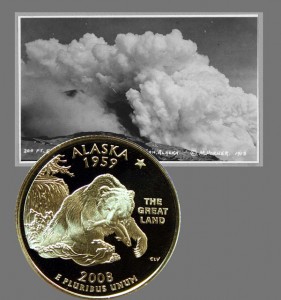