Today, the Army Commemorative Silver Dollar Coin remembers the beginning of the first private patriotic organization comprised of members of the American Army 233 years ago.

From The Identification of the Society of the Cincinnati by Mrs. L. A. Alderman published in 1888:

Is it any wonder, then, to one familiar with the principles contained in the by-laws of the Society of the Cincinnati, that such an organization should be formed on the eve of disbandment by the officers of the American Army?

This society was organized May 13, 1783, from an adjourned meeting of May 10, at which the motives for the call to the officers of the different state lines of soldiery were made known, and proposals offered as to the action to take, and the course to pursue.

In the preambles in the organization of the Society are to be found these clauses:

“It having pleased the Supreme Governor of the Universe, in the disposition of human affairs to cause the separation of the Colonies of North America from the domination of Great Britain, and after a bloody conflict of eight years, to establish them FREE, INDEPENDENT and SOUVEREIGN STATES connected by alliances, founded on reciprocal advantages, with some of the greatest Princes and Powers of the earth.”

“To perpetuate, therefore, as well the remembrance of this vast event, as the mutual friendships which have been formed under the pressure of common danger, and in many instances cemented by the blood of the parties; the Officers of the American Army do hereby, in the most solemn manner, Associate, Constitute and Combine Themselves Into One Society Of Friends, to endure as long as they shall endure, or any of their eldest male posterity, and in failure thereof, the collateral branches, who may be judged worthy of becoming its supporters and members.”

This much is here given to show how unjust the criticism that soon followed, on account of hereditary membership.

Those opposing the institution claimed that its perpetuation would develop an aristocracy.

The controversy was so great that in the first years of the history of the Society, its unpopularity, on account of misunderstanding its principles, became so great that much of importance, which might have been made public, was hidden away in archives that are not easily penetrated by the casual observer.

This can be said, however, that with an original membership of 1292, reduced in one hundred years to but few over three hundred, and this a hereditary membership, there has never been, and no sign now exists, of what was first claimed by its opposers, that it would finally result in direct opposition to the conquest gained by the victory of our forces over England, viz,—a monarchy or an aristocracy.

In the dark, despairing days of warfare Washington used to collect his trusted soldiers about him, and, in the extreme moments in their conversation he was often known to allude to a retreat west of the Alleghany Mountains.

He strongly impressed this idea upon the minds of many of his men, and they too, talked of a country they knew but little about, except what their Commander-in-Chief had told them.

A large number of the soldiers in the American Army hurriedly left the plow or their work in the fields when the first shot was fired at Lexington on the 19th of April, 1776.

In those days, in New England, the prevailing custom of gaining a competence was by tilling the soil.

These soldiers remembered that Cincinnatus when chosen dictator of Rome was found at his plow, and though twice chosen twice returned to it again.

They thought themselves not unlike him in the contemplation of their dismissal and returning to their fields to cultivate them.

The remnants of soldiers of the different State lines in 1783, were still waiting along the banks of the Hudson, for some positive action on the part of the government as to their longer need and final dismissal.

In the interim, an institution for brotherly protection, was forming and soon known as The Society of the Cincinnati.

As the members of this Society were among the officers of over three years standing in the army, it was natural for the associates of Washington to choose him for their President, and afterwards President General, when the general meeting was held in Philadelphia the year following.

After saying the first annual meeting of the Massachusetts society was held in Boston at the Bunch of Grapes Tavern, we leave the members for a time, while the controversy is pending as to what was understood as to the principles of the society embodied in its by-laws.

Byron has said of Washington—

“Thou art the first, the last, the best,
The Cincinnatus of the West.”

Washington, with his soldier friends and associates, Putnam, Tupper and many others were, no doubt, projectors of the Society of the Cincinnati, and, too, they were the prime movers in the formation of the Ohio Company of Associates.

These will be studied very minutely so far as the two have any bearing, one with the other.

“A new plan is in contemplation—no less than the forming of a new State westward of the Ohio. Some of the principle officers are heartily engaged in it. Enclosed is a rough draft of some propositions respecting it which are generally approved of. They are in the hands of General Huntington and General Putnam for consideration, amendment and addition.”

One month from the date of this letter, May 13, 1783, “in the cantonment of the American Army on Hudson’s river near Newberg, New York,” the Institution of the Society of the Cincinnati was organized among the officers of the different State lines.

The Army Commemorative Silver Dollar Coin shows with an image of the Society of the Cincinnati Certificate of Membership, circa 1845-48. 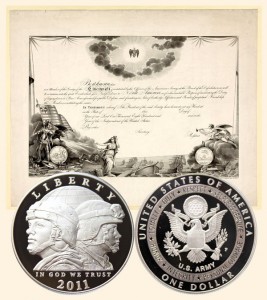