Today, the Barber Dime Coin remembers the strange weather event that began in the midwest and traveled eastward 114 years ago.

First, from the Pittsburgh Press:

Hundreds of Elizabeth Women Had Their Clothes ruined.

Special to the Sunday Press.

Hundreds of women shopping this morning had their spring garments ruined while goods of all description exposed for sale in front of stores were damaged by a phenomenal shower which proved to be red sand to the consistency of paste.

At 11 o’clock an ominous bank of black clouds swiftly rolled toward the city from the northwest and while passing over the city the shower fell slowly at first, then copiously.

Women had no time to escape it and did not believe that their clothing was irrevocably spotted and spoiled.

The sidewalk after the brief shower resembled a leopard skin which required much patient work on the part of merchants to remove.

Next, the Monthly Weather Review of May 1902 provided additional insights for the April storm:

Several communications have been sent us respecting a shower of discolored rain that fell in a number of the Middle Atlantic States on April 13.

An area of low barometer accompanied by thunderstorms crossed the Great Lakes to the Atlantic coast during the night of the 12th, and was followed by a high area, giving heavy winds.

The following extracts indicate that vast quantities of dust must have been taken up by the wind on the dry western plains, and that it was precipitated with the rain over the States farther east.

A dust storm in the middle of April is almost an unheard of thing, and laying aside the fact that yesterday’s (April 11) deluge of dirt came in a month when the earth should be saturated with moisture, it was remarkable for being the worst dust storm in this section at any season for some years.

The most recent approach to this storm was about six years ago when red dust was brought from the western plains by a high wind and deposited on the snow, giving it a sinister dark blood-like appearance.

The unprecedented dry weather had prepared the earth for the visitation of the wind yesterday and when the strong gale set in from the west it picked up the dust and particles of debris in clouds and whirled it through the air.

The clouds of dust were carried high in the air and hung like a pall over everything. The sun was almost completely obscured.

Casual observers thought that the sky was cloudy and that there was a possibility of rain, but closer observation revealed the fact that what seemed to be murky, low-hanging clouds was in reality a veil of dust hanging between heaven and earth.

Along toward evening the setting sun reddened this cloud and gave it the appearance of coming from a distant fire.

On Friday afternoon, April 11, about 4 o’clock, very black clouds gathered in the southwest, and passed on eastward, but there was only a very slight sprinkle of rain.

The next morning, Saturday, the air was filled with what seemed like smoke; but considering the great rains we had had all the week we were certain the woods were not on fire.

The air got thickest about 12 or 1 o’clock, when it resumed its normal clearness. There was a slight sprinkle of rain about the middle of the day, lasting only five minutes, but the rain instead of being clear was muddy.

My friend, Mr. W. H. Truslow, who lives just outside South Stroudsburg says that the new sails of his sailing canoe which he had just hoisted for the first time were sprinkled all over with thin mud, as also were the windows of his house (southern aspect ).

Mr. J. H. Jewett, Canandaigua, Ontario County, N. Y., sends a sample of white cotton cloth that was spotted by the shower at that place. It has much the appearance of having been mildewed.

Last Saturday, April 12, a strange phenomenon was witnessed in a remarkable shower sweeping from the west and extending the entire length of the lake (Cayuga), 40 miles.

How much farther it may have reached I do not know, but I have waited to glean positive testimony before writing you to ask if you can give any satisfactory explanation.

All Saturday forenoon the air was very calm, but a strange ashy-looking, very dense mist hung over the lake.

The atmosphere was heavily charged with moisture, but no rain fell until noon, when a sudden down pour dashed upon us from clouds which were so dense as to throw a pall of darkness over everything.

Some say the light over the lake was of a pinkish color. To me it was more the hue of the sand dunes of Michigan City.

Once having passed us the cloud filled the eastern sky with inky blackness. So threatening was the appearance of the sky upon the approach of the shower that many feared a veritable cyclone [tornado].

At this point, however, the wind was not severe, nor was it destructive in this vicinity, so far as I can learn.

The shower once upon us, it was discovered to be surcharged with sand, or mud, which discolored or soiled everything exposed to it.

Our windows were besmeared with muddy water; ridges of light colored sand lay along our tin roofs when the moisture dried away; on my veranda floor before the water evaporated the deposit had the appearance of coal dust or finest black mud; towels and coverlids on the grass bleaching had to be rewashed, they were so thoroughly soiled; in Ithaca umbrellas caught in the shower looked as if they had been trailed in the mud, and farmers in the fields or on the roads in Aurelius, north of us, say they could feel the sand on their faces.

Careful examination with a strong microscope showed the deposit to be composed of minute particles of various shapes, some like the tiny grains of wheat, mustard seed, or tiny cylinders, while others were brilliant transparent crystals, no two of which were alike in shape, but looked like mica or Hakes of quartz.

No one here had ever before witnessed such a phenomenon, and all wonder whether some terrific cyclone prevailed west of us to carry up such volumes of dust and bring them great distances to thus hurl them down here over so wide an area.

From newspaper clippings we learn that the mud rain was observed at Smithfield and Middle Smithfield, Pa., at the Delaware Water Gap, and at towns along the Hudson from Elizabeth, N. J., northward to Newburg and Poughkeepsie, N. Y. ; and from Science, for May 30, 1902, p. 872, that it was also observed at Easton Pa., and New Haven Conn. — H. H. K.

The Barber Dime Coin shows with two children sitting in the rain, circa 1902. 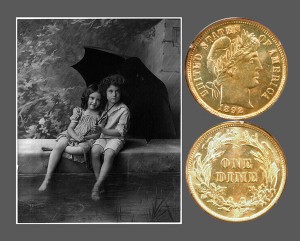