Today, the American Eagle Silver Dollar Coin (a real one) remembers a vintage news article from 125 years ago telling of the arrest of three counterfeiters.

Those counterfeiters, though successful for a time, produced silver dollars of a lesser quality.

But, this article reminds us of recent news where modern counterfeiters produce American Eagle silver dollar coins using silver over copper that are difficult to discern as fake.

Counterfeiting is an old crime that continues to improve the techniques and their output.

A gang of counterfeiters came to grief at Johnstown yesterday. For some time past, counterfeit silver dollars have been in circulation there, principally among saloonkeepers.

The secret service officers of this city were notified, and on Sunday two of them went to that place.

The men are residents of that town. As soon as the arrests were made the officers searched the house of Benjamin Reese. In it were found some counterfeit money, and a complete set of plaster molds for making the money. Counterfeit money was also found on each of the men.

The money was very poorly made but he men managed to get off a great deal of it within the past few months.

they would go into saloons where there is a large crowd about the bar, and when the barkeepers were very busy would slip a dollar to them and receive the change.

Not many were passed at one saloon, but when the saloonkeepers compared notes they all found that they had been generally victimized.

They then notified the officers, and watching carefully, they got evidence enough against the three men to warrant their arrest.

A hearing will be held at Johnstown tomorrow, and the men will be held for trial at the May term of court in this city.

Speaking about the arrest, one of the officers said this morning: “There is a sure case against the men and they will be convicted. I think counterfeiting at that town will cease for awhile.”

The men arrest are said to have been in trouble before. All are middle-aged men, and Reese is married.

As for current news, recently, a dealer bought 60 or more 2015-W American Eagle Silver Dollar Coins at a large regional coin show. He sent them to Heritage, which immediately returned the coins as Not Good.

Visit the Collectors Universe message boards for details on the fake coins and the recent transactions.

What’s the saying? The best defense is a good offense?

In this case, spend time learning about the fakes and how to identify them such that you won’t be a victim.

The American Eagle Silver Dollar Coin (a real one) shows beside an image of counterfeiting, circa 1910. 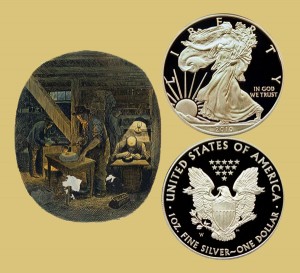