In 1840, Jared Sparks compiled and published the Works of Benjamin Franklin. Volume V included the speech made by the Earl of Macclesfield, President of the Royal Society.

“Sir Hans Sloane being now dead, who was the surviving trustee of the late Sir Godfrey Copley, Baronet, the right of disposing of that gentleman’s annual benefaction is incontestably devolved upon your President and Council, who have accordingly taken that matter into consideration.

“And, deliberating thereupon, they thought it their duty to keep these two points steadily in view, namely, the advancement of science and useful knowledge, and the honor of this Society. To the attaining both which ends they were convinced, that a strictly just and impartial disposal of this benefaction in favor of those only, who truly deserved it, would not a little conduce.

“Upon these principles your Council proceeded in fixing their choice of a person on whom this honorable mark of distinction should be this day conferred, and on such an occasion they could not overlook the merit of Benjamin Franklin, Esquire, of Pennsylvania.

“For, though he is not a Fellow of this Society, nor an in habitant of this Island, he is a subject of the crown of Great Britain, and must be acknowledged to have deserved well of the philosophical world, and of this learned body in particular, to whom he has at various times caused to be communicated many of the experiments he has made, and of which you have lately received a large collection, together with the conclusions which he imagines may be deduced from them; all which are contained in his printed treatise upon the subject of electricity.

“A subject known in part, indeed, long ago, but which not many years since was thought to be of little importance, and was at that time only applied to illustrate in some degree the being and nature of attraction and repulsion; nor was anything worth much notice expected to ensue from it.

“But, to the honor of this Society, and of the British nation in general, let it be remembered, that the person, who first attempted to explain the secrets of this then neglected subject, which now appears to have a most surprising share of power in nature, and who gave occasion to the diligent researches, that have since been made into the principles and essence of it, was a member of this Society, and a native and inhabitant of England, who, I am sorry to say, is now no more, since it must have given him inexpressible pleasure to see, that what he had done with respect to electricity had occasioned those great and important discoveries, which have now been made in relation thereto.

“For not only his countrymen, but foreigners also, were incited by what he had discovered to make further experiments, and to push on with a becoming spirit their inquiries into the nature of this extraordinary phenomenon; and the indefatigable pains of a learned brother, now present, were crowned with success even beyond expectation, and enabled him to make so considerable a progress in explaining and forming a kind of system of electricity, which now does and will continue to do him the greatest honor in all parts of the learned world.

“I am persuaded, that it would offend this gentleman’s modesty to hear, especially in this public manner, those commendations which he justly deserves, and the high opinion which not only myself, but the whole Society, entertain of his uncommon skill and abilities, as well in other branches of knowledge, as in this whereof I have been speaking; for which reason I shall put a constraint upon myself, and forbear entering into that encomium, which I really think to be due to him.

“The advances, however, which this gentleman and others had made towards laying open the nature of electricity, though very considerable in themselves, left room for carrying on these inquiries still further. To this work Mr. Franklin earnestly applied himself; and, as his diligence and ingenuity deserved, so they met with, uncommon success.

“For, though some others might have begun to entertain suspicions of an analogy between the effects of lightning and electricity, yet I take Mr. Franklin to be the first, who, among other curious discoveries, undertook to show from experiments, that the former owed its origin entirely to the latter; and who pointed out an easy method whereby any one might satisfy himself of the truth of the fact, which he had so advanced.

“This method, which he had pointed out, was so much approved, and has been so successfully put into execution in many different places, that it remains no longer a matter of suspicion and doubt, but is clear and plain to a demonstration, that electricity alone is the cause of that tremendous appearance, whose effects prove frequently so fatal in many parts of this terraqueous globe. And it were greatly to be wished, that some effectual and practicable way could be found by Mr. Franklin, or others, to prevent, or at least to lessen, the mischiefs, which too often attend that terrible meteor.

“Mr. Franklin’s book has for some time been in the hands of most who hear me, and large accounts, drawn up by foreigners (as well as by the learned gentleman before mentioned), of Mr. Franklin’s numerous and curious experiments, have been laid before this Society, besides those which himself has more immediately caused to be communicated to us at various times. It would therefore be impertinent in me to trespass upon your patience by entering into a detail of particulars, which, I am satisfied, you are all well acquainted with.

“True it is, that several learned men, both at home and abroad, do not entirely agree with him in all the conclusions, which he thinks may be deduced from the experiments he has made. But far be it from me to pretend to decide these points, more especially in this place and at this time. That matter is yet in dispute; and, if I am rightly informed, Mr. Franklin is now preparing to produce in support of his sentiments still farther experiments, some of which, he flatters himself, will appear more surprising than any that have already been communicated to the world.

“Let it therefore suffice for the present to say, that even those persons, who happen to differ from him in opinion as to some points, universally acknowledge his great merit, and particularly the learned gentleman, whom I have more than once mentioned, is pleased to declare Mr. Franklin to be ‘a very able and ingenious man,’ and says, ‘that he has a head to conceive, and a hand to carry into execution, whatever he thinks may conduce to enlighten the subject-matter of which he is treating; ‘ and, although that gentleman ‘cannot agree with him in some of his opinions, yet he thinks scarce anybody better acquainted with the subject of electricity than Mr. Franklin.’

“These testimonials, therefore, given by so capable as well as unprejudiced judges, in his favor, and more especially that character of him, which I have just quoted, joined with that opinion, which everyone who has read his books must entertain of him, will sufficiently justify your Council in having adjudged to Mr. Franklin the Copley medal for this year, as a mark of distinction due to his unquestionable merit.

“Many and very considerable advantages and improvements have, within the space of some years past, been made in several branches of natural knowledge; but there is ample room still remaining for the inquisitive and able philosopher to employ his skill and labor.

“The Book of Nature is a very huge and comprehensive volume; and, notwithstanding no small part of it has been unfolded and exposed to our view by learned and ingenious men of this and many other countries, yet it still contains abundantly sufficient matter to exercise our talents upon, and which justly ought to excite our curiosity, and encourage us to proceed with vigor in our endeavors to bring to light what is at present concealed from our eyes.

“We know that few things are of so occult and obstinate a nature, as not to yield to sagacity, and to be forced to lay open their most hidden properties to the diligent and inquisitive inquirer.

“In confidence whereof let us pursue, with unwearied application and assiduity, our researches into every branch of natural philosophy. Nor let us be discouraged from such pursuits by a mistaken notion, that any part of it is too inconsiderable to deserve our regard and attention; since who could have entertained any hopes, some years ago, that electricity was capable of furnishing matter for so great and important discoveries, as have lately been made in relation thereto, and which at this time afford us a promising prospect of much more and greater, if due pains are not wanting, on our part, to search after them ?

“It is, therefore, to be hoped, that those gentlemen, who have applied their thoughts and studies to lay open the amazing properties of electricity, will not sit down contented with the progress that has already been made therein, but will rather be encouraged thereby to proceed diligently in the same work.

“And I flatter myself, that Mr. Franklin will consider this honorable present not only as a reward, in some measure, of the discoveries with which he has already favored the world in relation to this very powerful agent in nature, but also as a proper incitement to carry on still farther his inquiries into this truly deserving and important subject.

“Nor do I in the least doubt, that our worthy brother, Mr. Peter Collinson, to whom (as Mr. Franklin resides in a remote country) I shall recommend the care of conveying this medal to him, will make use of all proper means to induce him to persevere in so laudable an undertaking.”

The Benjamin Franklin Scientist Commemorative Silver Dollar Coin shows beside a portrait of Mr. Franklin with one of his electrical devices, circa 1763. 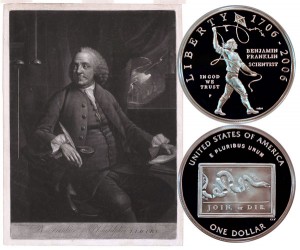