On the following day, The Daily Alta California newspaper out of San Francisco provided a description of the event:

The Building Completed and Transferred by General McCullough to General LaCrange,

Full Description of the Finest Mint In the World.

A Cheap, Yet a Most Substantial and Well-Finished Edifice.

General McCullough had extended invitations to many prominent citizens to be present at the formal transfer and make an inspection of the building.

But the weather was unfavorable for a large attendance. Rain commenced to fall about five o’clock in the morning and continued to pour down until late in the afternoon.

Still the attendance was quite large, over one hundred ladies and gentlemen being present. The visitors were shown through the building, and about an hour was spent in its inspection.

They passed along the immense corridors viewing the handsomely furnished offices on either side; went to the second floor, where the scene was more varied, many of the Operating rooms being here.

They finally visited the basement, where their astonishment was complete in beholding the wilderness of machinery, all moving almost silently and with the ease and regularity of clock work.

Among those present were Dr. H. R. Linderman, Director of the Mint Bureau at Washington, Congressmen Clayton and Luttrell, George C. Gorham, Secretary of the Senate; Collector of the Port Shannon, Surveyor of the Port Gray, R. B. Woodward, Arthur Orr of the firm of Morgan & Orr, Philadelphia, builders of the coinage machinery, Irving M. Scott of H. J. Booth & Co., who manufactured the motive power of the Mint, and many prominent bankers and merchants of the city.

They were all lavish in their praise of the building, noting more especially its great strength and, at the same time, delicacy of finish.

The design for this splendid work was drawn by A. B. Mullett, Supervising Architect of the United States.

After inspecting the building the visitors assembled in the Superintendent’s room, where General McCullough formally transferred it to General LaGrange.

General LaGrange, I am informed by the Supervising Architect of Public buildings, A. B. Mullett. that you have been appointed custodian of this building, and I have been directed by him, upon its completion, to turn it over to you.

Before doing so it may not be Improper for me, in the presence of these gentlemen, invited guests and citizens of San Francisco, to review briefly the work of constructing this building since I have had charge of it.

Early in the month of February, 1873, the Secretary of the Treasury, Hon. G. S. Boutwell, appointed me Superintendent of Construction under Mr. Mullett, the Supervising Architect.

I assumed the duties of my office and took charge of the work about the middle of February, 1873.

The naked walls were then built, the roof but partly put on. The main chimneys were about sixteen feet above the roof.

The work of completing the building has progressed without interruption since that time up to the present.

I invite examination as to the goodness of the materials employed and as to the quality of the workmanship, and to ask you and the public to Judge whether or not both are what they should be.

I desire to call your attention especially to the superior quality of the furniture you see here.

The contract for making it was given to J. B. Luchslnger & Son, and it was manufactured by them In this city.

The workmen employed on this building are entitled to credit for the faithful and efficient manner in which they have performed their duty to the Government, and I thank them for the effectual way in which they seconded my efforts to bring this edifice to a successful completion.

The entire work entrusted to my care has been completed to my full satisfaction.

I cannot close without making grateful acknowledgements to Mr. Mullett, the Supervising Architect, for the good counsel and the prompt, able, active and efficacious assistance which he has at all times given me in the discharge of my duty and in the prosecution of this work.

And now. in obedience to his direction, I hereby formally turn over this building into jour charge and control, and take great pleasure In doing so, and hope that you may long occupy it.

I feel quite certain, sir, that at the expiration of your term of office your record of the administration of the affairs to be transacted here will be as pure morally and as clean and untarnished as those walls and appointments now actually are.

General LaGrange accepted the trust and replied as follows:

Sir: In accepting this key it is perhaps appropriate for me to express the hearty thanks of those engaged in the Mint service in this city, to you and to your able corps of assistants, for the energy, skill, fidelity and good judgment that you have displayed in finishing and furnishing this admirable building.

Entering cordially into the spirit of the excellent plans of the Supervising Architect, Mr. Mullett, with Tracey, Staley, Myers, Orr, Booth, Scott, Rutherford, Luchinger and Kennedy to second your efforts, you have accomplished those plans in a manner to excite the admiration of the most critical.

Our thanks, and the thanks of the whole people of this Court are due also In large measure to the members of our delegation In Congress, who have uniformly voted, irrespective of party, for the speedy completion of this building;, which is now not merely a great public convenience, but an absolute public necessity.

And we, sir, who have watched the progress of this building from the laying of its cornerstone, will always experience mingled emotions of gratitude and sorrow when we think of Stebbins and Baker and Eckfeldt (whose place cannot be filled), each of whom built a portion of his life into this work, but neither of whom live to witness its completion.

You have kindly expressed a hope, sir, that we may leave a record here as stainless as the walls you now deliver to our custody.

Five years ago when we entered upon the duties that must be continued here, the auspices were less favorable than now.

The way appeared beset with danger to reputation, which a prudent man would willingly avoid.

But a quiet kindly man of large experience had been sent to inaugurate the new administration, and he gave us this simple rule for safety: “Strict accountability of officers and workmen; absolute security for the Government and the depositor.”

He has aided and sustained us in establishing the necessary checks to enforce this rule, and I speak with pride of the result, for it offers proof not only of his wisdom, but of the fidelity and skill with which the metals have been manipulated, and the accounting made between the Government and the depositor.

Upon this amount of work the legal allowance for wastage would have been over half a million of dollars, while the actual wastage has been but $20,000, or one-twenty-fifth part of the loss allowed by law.

So that we may say with safety that the Government has not lost a dollar in these operations by any wrongful act, and that no depositor has either lost a dollar or left the Mint dissatisfied.

These facts and figures speak more eloquently than any words of mine could speak for those of every grade engaged in the Mint service here.

Under the guidance of the accomplished head of the Mint Bureau, Dr. Linderman, whom we are glad to have among us here today, we feel that the honor of the Government is in our keeping, and we are proud and jealous of the trust.

We feel, sir, that in the near future, when San Francisco shall arbitrate the exchanges of more than half the world, our bankers and our merchants will find within these walls a constant, safe and perfect magazine to forge the peaceful weapons for the mighty conquests in which they will send the eagles on our coin farther than ever Roman eagles went, and win more prosperous and profitable victories than ever Roman legions won.

And now, sir, that the cause of strife which has distracted our own land for fifteen years, is passing rapidly away, we hope our statesmen will find time to attend to the financial question, and we are glad to have so fortunately placed at the commercial centre of the American gold coast so powerful an instrument as this Mint will prove for furnishing to all our people honest money, which must always be the guarantee of business safety and of national integrity.

The entire party were then invited upstairs and partook of a collation provided by General McCullough.

The visitors enjoyed what they had seen very much, and while at table many times complimented the Superintendent of Construction.

The San Francisco Old Mint Commemorative Silver Dollar Coin shows below an image of the Lady’s engine room, circa 1882. 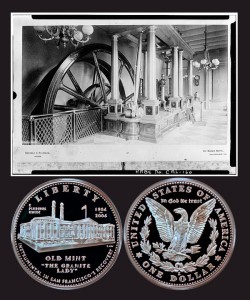