Today, the Statue of Liberty Commemorative Half Dollar Coin remembers the pomp and circumstance celebration of October 28, 1886.

The Paterson [NJ] Daily Press described the events of that day:

The threatening sky, which overhung New York, served merely to save the city from being swamped with the crowd of sightseers who swarmed upon the streets seeking places to view the great parade of military and civic societies, and crowded the available shipping to observe the grand procession of vessels, all who were otherwise bound to celebrate the great event of the day—the unveiling of Bartholdi’s colossal statue of “Liberty Enlightening the World.” The city and especially the vessels along the wharves were gay with flags.

It was 10:15 before the land parade started. The formation of the column and the line of march were given in advance in The Press. There were probably 20,000 men in line. President Cleveland, Secretaries Bayard, Vilas, Garland and Whitney, Generals Sherman and Sheridan and others reviewed the procession from a stand on Fifth Avenue.

It was misty on the river, and the effect of the naval parade was partly spoiled thereby. There was great booming of guns and screaming of whistles as the flotilla moved down the stream.

There was some delay in the exercises at Bedloe’s, or, as it has been newly christened, Liberty Island. A signal gun ushered in the ceremonies, which were begun by a prayer from Reverend Dr. Richard S. Storrs. M. de Lesseps, on behalf of the Franco-American Union delivered a short address.

His voice was weak with emotion as he faced President Cleveland, Governor Hill, M. Bartholdi and the guests, and told how proud he was to be able to speak of liberty and union of sentiment between France and America. The marvelous old man was received with a round of applause.

He spoke in French. The octogenarian canal builder faced the storm boldly without any covering to his silvered head, although he stood forward in the rain.

Senator William M. Evarts made the formal presentation address, which was cut shorter than he intended by a rather ludicrous mishap.

He happened to mention the name “Bartholdi.” That name was the cue agreed on and through a mistake the signal was given and the veil withdrawn from the face of the statue amidst the booming of the cannon and the shrieking of whistles from the hundreds of steamers and other craft gathered around the island.

This indescribable ovation continued for fully half an hour, and then Mr. Evarts did not get a chance to conclude his speech.

He then, when the booming and tooting subsided, introduced Grover Cleveland, President of the United States, who, in accepting the statue, said:

“The people of the United States accept with gratitude from their brethren of the French republic the grand and complete work of art we here inaugurate.

“This token of the affection and consideration of the people of France demonstrates the kinship of republics, and conveys to us the assurance that in our effort to commend to mankind the excellence of a government resting upon popular will, we still have beyond the American continent a steadfast ally.

“We are not here today to bow before the representative of a fierce and warlike god, filled with wrath and vengeance, but we joyously contemplate instead our own deity, keeping watch and ward before the open gates of America, and greater than all that has ever been sung or celebrated in ancient song.

“Instead of grasping in her hand thunderbolts of terror and of death, she holds aloft the light which illumes the way to man’s enfranchisement.

“We will not forget that Liberty has here made her home, nor shall her chosen altar be neglected.

“Willing votaries will constantly keep alive its fires, and these shall gleam upon the shores of our sister republic in the East.

“Reflected thence and joined with answering rays, a stream of light shall pierce the darkness of ignorance and man’s oppression, until Liberty enlightens the world.”

After President Cleveland came M. A. Lefaivre, Le Ministre Plenipotentiare et Delegue Extraordinaire, who spoke in English as the representative of the Republic of France.

After Mr. Depew’s address the doxology, to the tune of “Old Hundred,” sung by the multitude, closed the great event of the day.

A banquet was given by the New York Chamber of Commerce in honor of the representatives of the French republic and invited guests, at Delmonico’s in the evening.

It had been intended to illuminate the statue and to have a display of fireworks, but these displays were postponed on account of the weather.

The Statue of Liberty Commemorative Half Dollar Coin shows beside a news picture from the Lewiston [ME] Evening Journal, circa 1886. 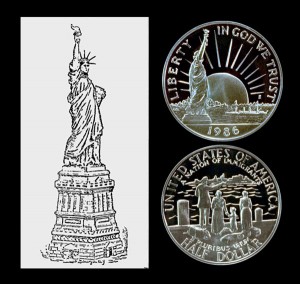