Today, the Utah State Quarter Coin tells the story of the Pony Express, which ended 154 years ago.

In October 1861, the two lines, one eastward from California and the other westward from Omaha, met in Salt Lake City, Utah.

On October 26, 1861, the Pony Express was abandoned as the telegraph lines became operational.

That urgent appeal settled the question, and work was commenced to start the Pony Express.

On the Overland Stage Line operated by the firm, stations had been located every ten or twelve miles, which were at once utilized for the operation of the express; but beyond Salt Lake City new stations must be constructed, as there were no possible stopping-places on the proposed new route.

In less than two months after the promise of the firm had been pledged to Senator Gwinn, the first express was ready to leave San Francisco, and St. Joseph, Missouri, simultaneously.

The fastest time ever thus far made on the “Butterfield Route” was twenty-one days between San Francisco and New York.

The Pony Express curtailed that time at once by eleven days, which was a marvel of rapid transit at that period.

The plant necessary to meet the heavy demand made on the originators of the fast mail route over the barren plains and through the dangerous mountains was nearly five hundred horses, one hundred and ninety stations, two hundred men to take care of these stations, and eighty experienced riders, each of whom was to make an average of thirty-three and one-third miles.

To accomplish this each man used three ponies on his route, but in cases of great emergency much longer distances were made.

The letters or dispatches to be carried by the daring men were required to be written on the finest tissue paper, weighing half an ounce, five dollars being the charge for its transportation.

As suggested by two members of the firm, when they protested that the business would not begin to meet the expenses, their prophecies proved true; but they were not disappointed, for one of the main objects of the institution of the express was to learn whether the line through which the express was carried could be made a permanent one for travel during all the seasons of the year.

This was determined in the affirmative. One of the most important transactions of the Pony Express was the transmittal of President Buchanan’s last message, in December, 1860, from the Missouri River to Sacramento, over two thousand miles, in eight days and a few hours, and the next in importance was the carrying of President Lincoln’s message, his inaugural of March 4, 1861, over the same route in seven days and seventeen hours.

This was the quickest time for horseback riding, considering the distance made, ever accomplished in this or any other country.

In the spring of 1860 Bolivar Roberts, superintendent of the western division of the Pony Express, came to Carson City, Nevada, to engage riders and station agents for the Pony Express route across the Great Plains.

In a few days fifty or sixty were engaged, — men noted for their lithe, wiry physiques, bravery and coolness in moments of great personal danger, and endurance under the most trying circumstances of fatigue.

Particularly were these requirements necessary in those who were to ride over the lonely route.

It was no easy duty; horse and human flesh were strained to the limit of physical tension. Day or night, in sunshine or in storm, under the darkest skies, in the pale moonlight and with only the stars at times to guide him, the brave rider must speed on.

Rain, hail, snow, or sleet, there was no delay; his precious burden of letters demanded his best efforts under the stern necessities of the hazardous service; it brooked no detention; on he must ride.

Sometimes his pathway led across level prairies, straight as the flight of an arrow.

It was oftener a zigzag trail hugging the brink of awful precipices, and dark, narrow canons infested with watchful savages eager for the scalp of the daring man who had the temerity to enter their mountain fastnesses.

At the stations the rider must be ever ready for emergencies; frequently double duty was assigned him. He whom he was to relieve had been murdered by the Indians perhaps, or so badly wounded, that it was impossible for him to take his tour; then the already tired expressman must take his place, and be off like a shot, although he had been in the saddle for hours.

The ponies employed in the service were splendid specimens of speed and endurance ; they were fed and housed with the greatest care, for their mettle must never fail the test to which it was put.

Ten miles at the limit of the animal’s pace was exacted from him, and he came dashing into the station flecked with foam, nostrils dilated and every hair reeking with perspiration, while his flanks thumped at every breath!

Nearly two thousand miles in eight days must be made; there was no idling for man or beast.

When the express rode up to the station, both rider and pony were always ready.

The only delay was a second or two as the saddle pouch with its precious burden was thrown on and the rider leaped into his place, then away they rushed down the trail and in a moment were out of sight.

Two hundred and fifty miles a day was the distance travelled by the Pony Express, and it may be assured the rider carried no surplus weight.

Neither he nor his pony were handicapped with anything that was not absolutely necessary. Even his case of precious letters made a bundle no larger than an ordinary writing tablet, but there was five dollars paid in advance for every letter transported across the continent.

Their bulk was not in the least commensurable with their number, there were hundreds of them sometimes, for they were written on the thinnest tissue paper to be procured.

There were no silly love missives among them nor frivolous correspondence of any kind; business letters only, that demanded the most rapid transit possible and warranted the immense expense attending their journey, found their way by the Pony Express.

The mail-bags were two pouches of leather impervious to rain, sealed, and strapped to the rider’s saddle before and behind. The pouches were never to contain over twenty pounds in weight.

Inside the pouches, to further protect their contents from the weather, the letters and dispatches were wrapped in oil-silk, then sealed.

The pockets themselves were locked and were not opened between St. Joseph and Sacramento.

The Pony Express as a means of communication between the two remote coasts was largely employed by the government, merchants, and traders, and would eventually have been a paying venture had not the construction of the telegraph across the continent usurped its usefulness.

The Utah State Quarter Coin shows against an image of a Pony Express rider racing past men raising telegraph poles. 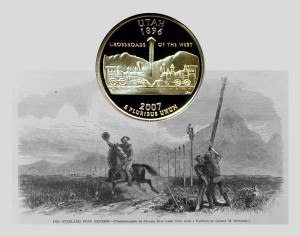